I've made no secret about my love of the Way of the Samurai series. The sample review I sent to GameCritics.com when I was applying for a job was a review of Way of the Samurai that I'd written for another website. In that review I made the argument that it set a new high bar for videogame storytelling, in that, unlike just about every other game ever, it allowed the player to fully participate in shaping the story. While the vast majority of games offer completely linear stories, whose progression is unlocked a bit at a time through gameplay, Way of the Samurai made the gameplay the manner in which the story was progressed. In addition to simply picking a side and making different dialogue choices, how the game is actually played affected outcomes as well. Lose a fight and the game wouldn't necessarily end, it might just set the story down a new path.

The second game massively improved on the first, adding a wide variety of weapons, fighting styles, streamlined combat, and endings that weren't incredibly depressing. More characters, more endings, larger scope—everything that was good about the first game was great here, which was the general point of my review… which doesn't seem to be on the website. Huh? Give me a second.

Yeah, somehow I never managed to port the review over to the new format, so until I get around to doing so, it's here—

Anyway, as I said in that last review, there's nothing I'm looking forward to more than Way of the Samurai 3. There were a few scary months there where it looked like Spike was going to try to develop a multiplayer "Way of the Samurai Online", but thankfully that was killed, and they made the game they should have been working on all along.

Way of the Samurai 3 came about back in November, but sadly it remains the best game I haven't played yet. Why? Because it was only released in Japan, and although PS3s are admirably region-free, the Japanese language's stubborn refusal to transform magically into English has transformed the prospect of importing a copy of it from a delightful dream into an utter waste of money.

So, until some publisher spends the absolutely minimal amount of money required to turn the menus and text into English, I'll have to be satisfied with the following images. 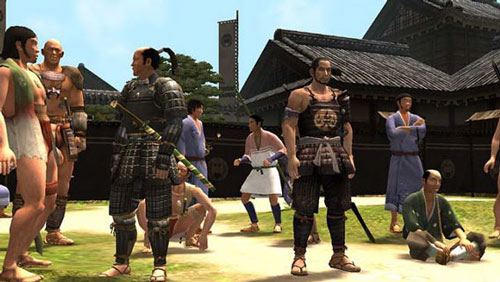 Well, the graphics look about twice as good as the last Way of the Samurai game, which exceeded my expectations, so "yay" there, right? 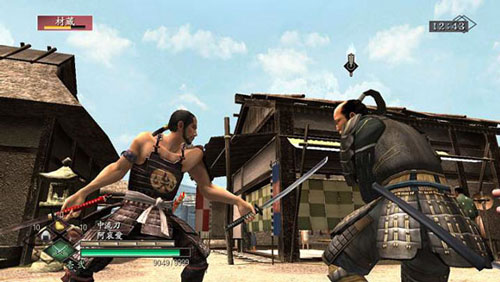 Oh, look at that! There's a little arrow over that guy's head so I'll know who I'm targeting. Convenient! 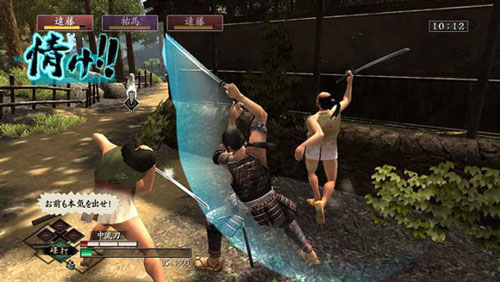 I'd feel a lot more confident in this image if there was a geyser of blood shooting out of that guy, but let's give them the benefit of the doubt and guess they hadn't implemented gore yet. 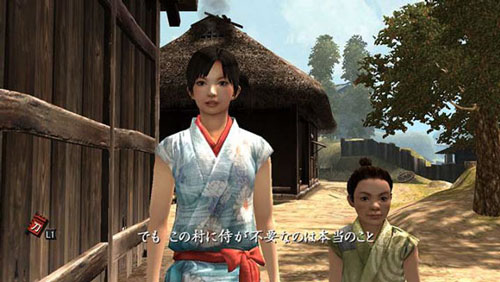 I see some plot happening! I'm not sure what's being said here, but given that it's a game about samurai, let's assume she's asking the player to kill someone.

As we can see, the game appears to have everything you'd want from a Way of the Samurai title—A japanese town, some cinematic sword-fighting, and at least 15 different endings (okay, that part's not from the pictures, I did a little research as well). But the Way of the Samurai series isn't just known for sword-fighting. No, there's always a little craziness thrown in as well, whether it be Mongo the killer giant from the first game or the wacky costumes of the second, there's always a little side fun to be had. And because this is the biggest Way of the Samurai game yet, we can expect the craziness to have been amped up along with everything else! 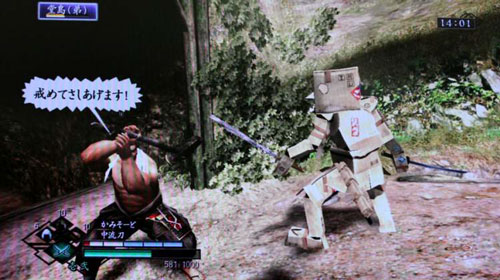 For example, here's a cardboard man! 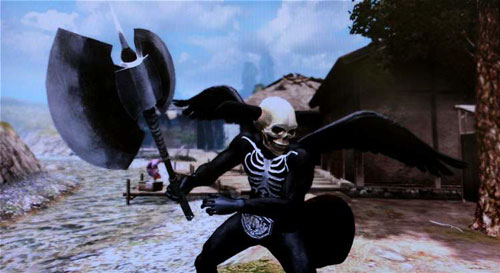 Is that the angel of death? I think so! 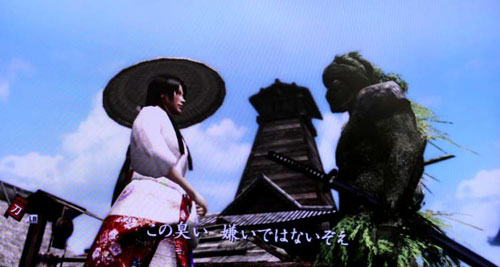 Depending on the climate, that is either amazing or terrible camouflage. 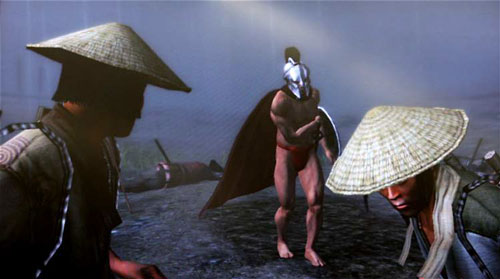 And, of course, where would we be without one of the guys from 300? Not in a Way of the Samurai game, that's where!

As you can plainly see, there's no game more promising than this one, and we can only hope that some North American developer wakes up and translates this beautiful gem, giving it the release it deserves, receiving delicious money as a reward.

Or at least a European developer, because, again, the PS3 is delightfully region-free. Anyone English. Although I'll happily accept German or French at this point. Really, I just want a language that I know how to read, people.