Fire Up The Grey Cells 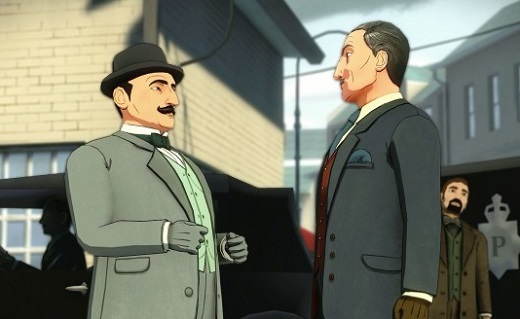 LOW Being forced to lean on the hint key because of a buggy puzzle.

WTF You want to exercise your 'Brain Cells'? Um.. you are Hercule Poirot, aren't you?

It's important to respect outright thievery in the video game world. Courts have determined that game mechanics aren't protected by copyright, and that's clearly for the best from a development standpoint.

Imagine a world where ID Software wasn't able to play Terminator: Future Shock and then collectively say 'we should do exactly this, only with less interesting enemies!' The world would have been denied Quake. (Also, every other freelook shooter.) I compliment thieves because building something new on top of something great should never be discouraged.

Take The ABC Murders, for example.

The developers obviously studied the incredible work that Frogwares has been doing with the Sherlock Holmes license—the character-defining observation/profiling sequences, the top-of-its-genre crime scene investigating, the clue-connecting deduction board—and said to themselves 'Hercule Poirot is just a rip-off of Sherlock Holmes, so a Poirot game ripping off the Holmes games could work!'

The thing is, they were absolutely right. They took the best mystery game structure, plugged in a different main character, and the result was proof positive that this is a fundamentally solid model for creating great titles.

The ABC Murders follows the plot of Agatha Christie's novel from 1936 closely—so closely, in fact, that anyone familiar with it will find no surprise twists awaiting them when it's time to unveil the killer. This is a bold choice on the part of the developers since it must have been tempting to change the story to provide a fresh experience for Poirot fans. I'm happy to see that they restrained themselves, however—it's a fine novel with a perfectly structured mystery, and the decision to remain faithful results in a satisfying story.

An interesting twist is brought to bear by the game's 'ego' system, which rewards the player for role-playing as much like Poirot as possible. Checking his moustache in every available reflective surface? Three points. Harassing people about health code violations in the middle of an interview? Another three. Making sure furniture is at right angles to walls? Ten points. Part of Poirot's charm comes from his OCD fussiness, and even though the game offers plenty of different conversational options, the developers have recreated Poirot's character and attitude perfectly. So much so, in fact, that going out of my way to play like him felt like a pleasure, rather than a chore.

While the majority of the investigation is top-notch, there is one place where the game stumbles.

In attempt to make sure that the adventure contains traditional challenges, each of the three crime scene locations has at least one 'puzzle box' which needs to be unlocked. It's a jarring break from the faithful touch with which the rest of the story is presented. The boxes themselves are interesting enough —other than an oddly buggy steamer trunk—and while they provide a decent challenge to crack and a sense of satisfaction when solved, I can't help but wish the developers had worked harder at creating puzzles which fit the text.

There are also a couple of problems in the deduction board sequences—the player is posed a question, and they have to put two or three pieces of evidence together to solve it. Unfortunately, a few of the questions are so obliquely written that it can be too difficult to guess which evidence the game wants presented. Luckily, whether players are facing buggy design or they're just plain stumped, a quickly recharging hint button is on hand to help them through the frustrating sections.

The ABC Murders is a great piece of work. Made by fans of the source material for fans of the source material, Poirot is fully at home in the point and click adventure game genre. While I can't guarantee how playable it will be for people unfamiliar with the character or story, I suspect that newcomers will find it just as captivating as I did the first time. Rating: 8.5 out of 10


Disclosures: This game was obtained via publisher and reviewed on the Xbox One. Approximately 5 hours of play was devoted to single-player modes (completed 1 time).

Parents: According to the ESRB, this game contains use of alcohol and tobacco, blood, violence. It's rated T for smoking, drinking, and a little bit of bloody murder. That being said, it's all extremely classy and restrained, and just as I'd be comfortable with middle-schoolers studying Christie novels for class (I once wrote book notes to help them do that just!), even younger teens shouldn't have any trouble dealing with this game, assuming you're there to explain more complicated concepts such as jealously and inheritance. Also, there's a near (or not so near) suicide depicted onscreen, and that might be a little borderline for some.

Deaf & Hard of Hearing: You'll be fine with this one—no audio cues, full subtitling, and all vital information is displayed in text!

Colorblind Modes: There is no colorblind mode, and a few clue-seeking scenes ask the player to notice subtle differences in color. Also, the method for opening one of the puzzle-boxes is largely color-based. You'll have problems, but luckily the hint button is there to help you through them.

Remappable Controls: They can't be altered, which is a little annoying, since they've assigned the 'select' button when interacting with items to the left trigger, which is a little awkward to use. This is because they want players to select certain items with the left trigger, then hold it and move with the right thumbstick – this is all well and good, but 'grab' should be a distinct command from 'select', allowing me to click on things with the A button as I do in every other game ever, with RT being only for 'hold and move' commands, which are much rarer. In conclusion, the game does not offer adjustable controls, and requires players to use thumbsticks and buttons on different sides of the controller at the same time.