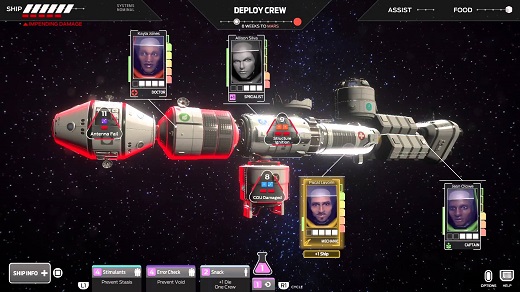 HIGH Landing my last crewman on Mars with one HP, in a ship with one HP.

LOW Being rewarded for rolling double sixes by being killed instantly.

WTF You guys are resorting to cannibalism awfully quickly. You know there’s a greenhouse on board, right?

Space is cold. While in it, no one can hear you scream. And, according to Tharsis, it’s also got a wretchedly unbalanced difficulty level.

As this boardgame/videogame hybrid begins, a rickety spacecraft has fallen afoul of rogue micrometeorites, leaving four injured crew members with the task of keeping their ship in one piece as it drifts onwards to Mars.

The trip is broken up into ten weeks, with each week following a set pattern – a number of things break, and the crew must struggle to fix the new problems along with anything left broken from the previous turns. At the same time, they must maintain healthy stress levels and avoid starving.

If doing all this sounds like a tall order, that’s because it absolutely is. Tharsis expects players to fail and die over and over and over again. At first, because they’re learning the game’s systems. Later, because they discover those systems are absurdly unfair.

The game’s setup is brilliantly simple. Damage to various parts of the ship is represented by a numerical value, and it can be repaired by sending a crew member to the ailing section and rolling dice. Healthy crew roll up to five dice, while weaker crew roll fewer. The dice result can then be either subtracted from the ship’s damage number as ‘repairs’, or assigned to activate ship functions or special character abilities.

All this dice rolling and number-crunching is daunting for the first few rounds, and new players should expect the ship to explode often, but the system actually makes perfect sense once some time is spent with it. It’s quite elegant, really.

Tharsis also does a great job with presentation. The ship has a wonderfully sterile industrial design which feels right for the setting, and the status windows that pop up with info have a clean design that makes the action simple to follow. The die rolling even has satisfying physics, giving players the chance to agonize over the tilt and spin of each individual cube.

The game’s touchscreen controls on Switch are a pleasure to use. The screen is perfectly sized for players to easily select the characters and locations they want to station them in, and dragging dice around the screen with a finger is simple and intuitive. Players can also use standard thumbsticks and buttons to navigate the various screen, but it’s far more convenient to just set a plan rolling along with a couple of taps.

However, for all of its good points, the difficulty in Tharsis is turned up far too high for it to be an easily-recommended experience.

I’m fine with overcoming dire challenges, but the challenges here don’t feel fair. Losing due to a bad roll is pure frustration, and a successful run isn’t satisfying at all, since it relies so heavily on luck. Strategy in Tharsis is responsible for perhaps ten percent of victory, with sheer luck dominating the other ninety.

The problems largely stem from the beginning of each new game. The crew starts out injured and exhausted, with almost no food to restore them or any assistance to protect them from bad rolls. The ship is already damaged, and the crew usually have between 8-12 dice split among four astronauts. Following this setup, the very first turn of any game has a roughly 50% chance that the crew will fail to get the ship in working order. With each new turn adding even more damage, players who don’t get a great starting draw will be overwhelmed almost immediately.

It’s a design failure to ask a player to restart the game multiple times until their first week is manageable. That’s not to say a good start guarantees success, though. As the weeks roll on, things get even worse.

Initially, players will only need to worry about Stasis dice effects when rolling. Stasis is when individual dice can’t be re-rolled if they land in the 1-3 range. It’s challenging but fair, especially because certain perks can temporarily nullify the effect. Less fair are Void and Injury dice, which destroy rolled dice and kill crew, respectively.

With incredibly limited options for healing crew and nobody to replace fallen teammates, a single bad roll can ruin a whole session — having less than a full complement of four ensures that the ship will crumble just a few turns after things start going bad. There’s just no way to keep up with how fast the problems pile on.

One option to make things a little easier is to cannibalize the bodies of fallen comrades. They start with one corpse already in the freezer, but food stores swell as more crew fall victim to unlucky rolls. It’s even possible to sacrifice one character so that the others have a better chance at survival. This cannibalism is an interesting feature, but it’s not effective as the emotional wallop the developers want it to be because of the heavy-handed moralizing with which it’s presented.

Like most people, I’m filled with revulsion at the thought of eating a fellow human, but I also understand that people trapped with no supplies will do what they have to in order to survive. Tharsis doesn’t think charitably of the starving, and presents cannibalism as a choice between death or the loss of humanity – it’s a harsh accusation to level at the real-life soccer players from the movie Alive.

Apparently the devs were still worried that their disapproval wasn’t getting across strongly enough, so in addition to calling them monsters, they also slather blood all over the dice of any crewmember who partakes. Having to eat a friend to survive could have been compelling or even chilling, but the implementation comes off so badly that I have to wonder why they bothered including it.

Food sources aside, on the few occasions when I completed the game, I was able to manage it only by keeping everyone alive until nearly the end. Even then, a single bad die roll would lead to a cascade of catastrophes. Under the best possible circumstances, I could only ever manage to get a single crew member down to the surface of the red planet.

As a spaceborne adaptation of tabletop dice-rolling, Tharsis is bold, interesting, and instantly accessible. Thankfully, in addition to the sadistic main campaign that I encountered when I first played the game, the developers have added a set of ‘challenge missions’ where the player is posed with handcrafted set of challenges to overcome using pre-set characters. One might ask players to survive a single turn in a incredibly crippled ship, while another demands they keep one character piloting the ship full-time while the rest keep it in running order. These training missions are extremely well-balanced and designed, and do a great job of teaching players the ins and outs of the game world before they set out on an actual doomed voyage. There are even a few terrifyingly cruel challenge missions in there for players who’ve become too comfortable with the indifferent randomness of the main game.

Despite thoroughly grasping of the rules of Tharsis and even being able to offer advice on how to be more successful to others, my winning runs were due entirely to luck. Sheer chance might be a solid basis for gambling or having a good time with friends, but when it comes to single player games, I should have a bit more say in whether my crew survives or not. Rating: 7.5 out of 10

Disclosures: This game was obtained via publisher and reviewed on the PC and Switch. Approximately 4 hours of play was devoted to single-player modes (completed 2 times). There are no multiplayer modes.

Parents: According to the ESRB, this game contains Violence, Blood, Strong Language. It’s rated M for a reason, and that reason is cannibalism. If your crew goes without food for too long, they’ll be given the option to eat the corpses of their fallen comrades, or even kill one another for food. This involves plenty of blood, and depictions of chunks of human meat. Beyond that, however, it’s a perfectly fine dice-based survival game!

Deaf & Hard of Hearing: You’ll be fine with this one – no audio cues, and all vital information is displayed in text!

Hey Dan, glad you got something out of Tharsis. I was especially drawn in by Weval’s soundtrack for the game. Beyond that, I liked the way it forced me to ignore short term threats and focus on multi-turn strategies. They recently updated the game, and the difficulty I want to say feels more organic? But still, I think I’ve put dozens of hours in and won… once. For me, surviving the randomness once seemed to make it worthwhile. I still play short sessions of it. I overall admired the design, but it is hard to recommend.