Who Will Win The Future? 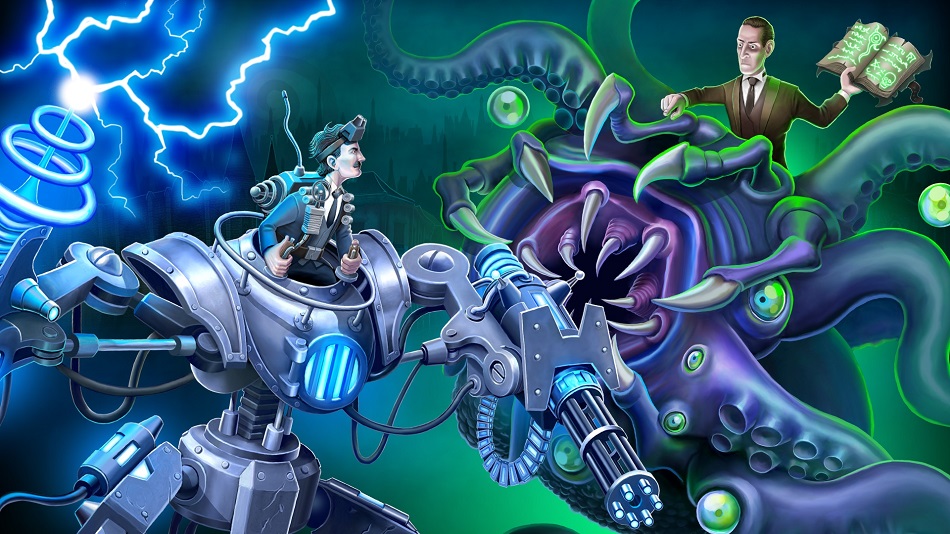 HIGH Using a fully-upgraded War Pigeon to wipe out two hundred monsters in a matter of seconds.

LOW Getting trapped by the Elder Polyp’s energy vortex again and again.

Settings don’t matter much in twin-stick shooters. Players want swarms of enemies, monstrous powerups, and (depending on their preference of foe) fountains of blood or showers of sparks. The why isn’t as important as the how, but a great setting can elevate a solid shooter to unexpected heights.

Tesla vs. Lovecraft has one of those fantastic settings, pitting the famous inventor and his arsenal of electrical weaponry against the abhorrent hordes that Lovecraft summons using his trusty Necronomicon. This leads to thirty levels of hectic action as fishmen, shoggoths, and a few other Mythos-inspired enemies attack in ceaseless hordes, forcing the player to test their reflexes to the point of exhaustion.

Smooth movement is vitally important for a great twin-stick shooter, and 10tons have done a brilliant job of developing one of the most agile systems for moving characters in top-down games. At the same time, they’ve built levels perfectly designed to utilize the mechanic.

Tesla is equipped with a teleportation backpack which allows the player to jump a set distance in their direction of movement with the press of a button, picking up any items that lay in their path. This keeps the game from becoming a slog built around surviving battles of attrition, as Tesla can warp right through hordes of enemies or across small gaps — even through walls. This frees the player up to take the fight directly to the enemy, knowing that there’s little chance of winding up cornered. Notably, the camera is agile enough to make sure that movement never becomes confusing, even when multiple players co-op on the same screen. 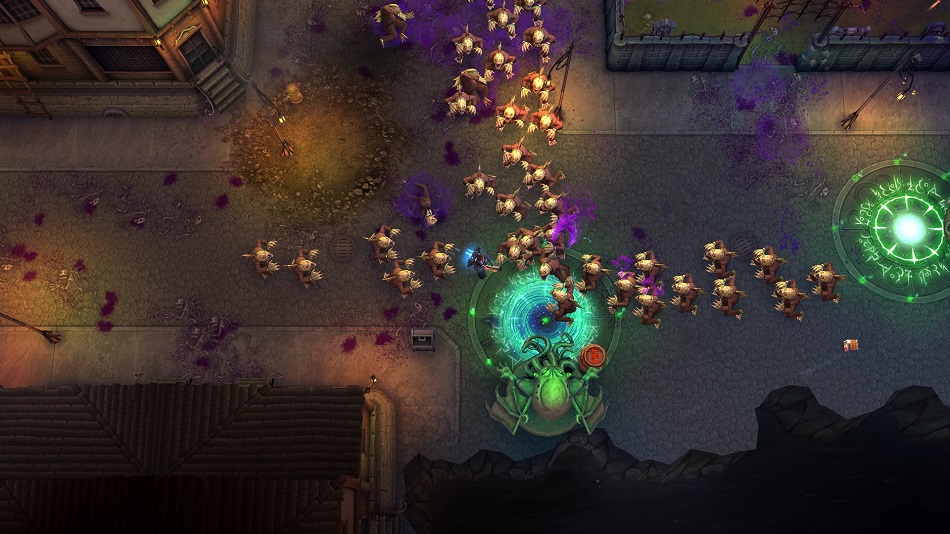 TvL’s arsenal is also well-designed. There’s a strong range of guns between wide-shooting and fast-firing, perfect for any playstyle. Impressively, they’re balanced enough that none of them seem particularly overpowered, and with the right perks everything but the starting pistol can be transformed into a formidable weapon. The player also has a ‘War Pigeon’ mech that they begin each level using. The Pigeon falls apart after a set amount of time or damage has be reached, and its parts scatter around the map. If the player collects all six pieces, they can unleash the mech again, giving them the chance to turn the tables on huge gluts of enemies.

TvL uses a Crimsonland-style upgrade system, meaning that Tesla starts each map at level 1, and quickly levels up by killing enemies. With each new level the player gets to choose between two random perks — everything from bonus damage, piercing ammo, and multiple barrels, as well as a host of ways to speed up Tesla’s movement. Success in any run is dependent to on the way players level up, and that’s as much down to luck as it is skill. Fortunately, the maps are only 1-2 minutes long, so a bad draw won’t annoy players for long before they get a chance to start again from scratch.

However, the one thing TvL botches is its upgrade system. In addition to the basic leveling-up that happens during each level, the player can collect crystals which unlock improvements — things like more teleport charges, a longer mech lifespan, a better chance at epic random perks, and so on. The problem is either that the upgrades are too expensive or the crystals are too rare. I made it through the entire game on all three difficulty levels and I never managed to unlock more than a quarter of the possible upgrades, suggesting that someone would need to spend dozens of hours to unlock everything by grinding the same levels over and over again. For a title that gets so much right, that’s a weird thing to ask of players.

Despite that bit of questionable design, Tesla vs Lovecraft is a delight thanks to its fast, tight action and its smart use of setting to push it over the top. As far as twin-stick shooters go, they don’t get much better than this.Rating: 8 out of 10

Parents: This game was not reviewed by the ESRB, but is essentially a T and contains Blood And Gore, and Cartoon Violence.  Do all of the enemies explode into bloody chunks? Yes – but not in a traumatic way. The enemies are scary cartoons, so it’s always fun to slaughter them, never traumatic. Even younger teens should be fine.

Deaf & Hard of Hearing Gamers: I played most of the game on mute and noticed no significant issues. It’s fully accessible.