Does the Coat Still Fit? 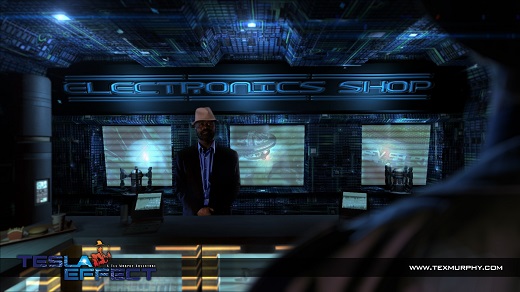 LOW Trying to figure out where the game wanted me to click. This is 2014, isn't it?

WTF Of course I have to use the giant mech to battle the wasps. Why not?

When the 'interactive movie' made its high-profile comeback with Telltale Games's Jurassic Park, I cheered. Here was a group of developers taking a chance on a much-maligned genre, and creatively employing it to tell the best possible version of a story. Tesla Effect wants to do the same for the FMV game—a relic from the 90s in which the main draw was a title full of living, breathing actors standing in front of crudely green-screened backdrops.

Picking up nearly a decade after his last game ended on a jarring cliffhanger, Tesla Effect finds series star Tex Murphy recovering from a convenient case of amnesia which gives the supporting cast an opportunity to fill players in on huge swaths of backstory without feeling overly contrived.

The short version? Ever since his girl went missing, Tex has taken his PI business down a dark path, turning into a real scumbag who works for ne'er-do-wells doing questionable things. It's the player's job to figure out who Tex has become, to unravel the conspiracy that resulted in him being nearly killed in the opening moments of the game, and then to decide who the real Tex Murphy is—the lovable rogue of previous titles, or the dead-eyed professional thug he's been recently.

The plot is a mildly confusing caper involving ghosts, cryogenics, hitmen, and a pair of competing cults who've each decided to follow Nicola Tesla's ideals in mutually exclusive ways.

There's also a host of interesting people to meet, and while the acting varies wildly from person to person, the writing is always solid. This isn't surprising, as the same creative team has been working on this world for over two decades now. Post-apocalyptic San Francisco—with its mutant citizens and A.I. rights organizations—is an entertaining setting brought to life by a witty script. The hard-boiled PI parody has been well-trod ground for a long while, but Tex Murphy is still one of the high points of the genre, always with a great quip ready to be expertly delivered by Chris Jones, who's grown into the role over the course of four games.

Unfortunately, the gameplay has not even remotely kept up with the times. When not having entertaining conversations with a series of oddballs, Murphy spends his time wandering around a series of indifferently-realized 3D locations. I'm sure budgetary restrictions keep the locations from looking better than they do, but it's disheartening to see that the devs made no effort to stylize the graphics. No, they seem happy enough to throw together a few rectangles and call it a building, and then to slap some bland, repetitive textures on top to finish it off.

It wouldn't be so bad if the game at least had some visual consistency, but every few minutes Tex will have to travel somewhere in his hovercar, and the game will cut to a surprisingly well-rendered CGI movie of a detailed future city. Or, he'll go to a location for a conversation with someone and a practical set will be sweetened with some lush CGI backgrounds before getting tossed back into the jarringly angular world they spend most of the game in. I'm not asking for everything to look as good as the cut-scenes, but it would be nice if different parts of the game didn't feel like they were in entirely different universes.

Then there are the puzzles, which are just shamefully outdated and feature pixel-hunting (which I didn't even think you could do in a 3D world.) Tex also has infinitely deep pockets, into which he stuffs literally everything that isn't nailed down in the hopes that it will come in handy at some point in the future. Even the minigames are stale—I was shocked to find that as part of getting into a mysterious hi-tech cult, I was expected to solve the classic 'Fox, Chicken, Bag of Corn' puzzle.

This kind of gameplay has been ridiculed for years, and for good reason. It has nothing to do with intuition or problem-solving skills, it's merely a series of non-sequitors awkwardly cobbled together and placed as a barrier to keep the story from moving forward. Oh, there's an anvil in the alley? Better pop it in my jacket in case I need to drop it on a camera later!

The game does its best to keep players entertained during the most trying of these sequences, always ready with a quip about the absurdity of the situations Tex finds himself in. Still, it seems like actually developing some decent puzzles and mysteries to solve would have been a better solution than hoping that we could all laugh together at the awkwardness of the bad ones. It's not a good sign that the game only manages to feel like a real PI experience once, and it involves ransacking a house to find baseball cards for a completely random puzzle.

For all its gameplay faults, Tesla Effect is never anything less than entertaining. It's just a pity that with all the work that went into the FMV portions of the game, no one bothered to do a commensurate amount of work on the 'play' parts. For all its quaint charms, Tesla Effect is held back by all of the flaws that killed its genre in the first place. Rating: 6 out of 10


Disclosures: This game was obtained via publisher and reviewed on the PC. Approximately 9 hours of play was devoted to single-player modes, and the game was completed.

Parents: This game was not rated by the ESRB, but it contains blood, violence, alcohol and drug use. Yeah, this probably isn't good for your younger teens. There's sex, violence, alcohol, drugs, a scene of innocent bystanders getting mass-murdered… Slot this pretty securely on the legitimately mature shelf.

Deaf & Hard of Hearing: You should be fine. Everything is subtitled, and there are almost no vital audio cues. Although at one point you're going to find yourself hiding from a ball of energy, and that's going to lead to more trial-and-error gameplay than you're going to be happy with if you can't hear it coming.