Dystopic… but not in a fun way. 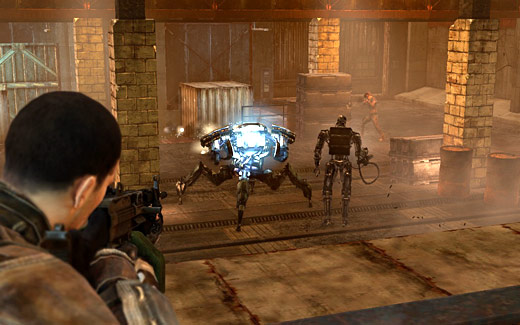 HIGH I finally got to see what one of those T-600s with the rubber faces looks like.

LOW It's two hours long. And most of that is spent ducking behind cars waiting for AI to do its job.

WTF This is a Terminator future-war game. Where are the lasers?

It's generally too simplistic to judge a game based on the length of time it takes to beat. There are dozens of different aspects that make up a positive experience with a video game, and for the most part its length only ever becomes an issue in two cases—great games are always over too soon and terrible ones seem to drag on forever. There is one place where a game's running time is instructive, and that's when considering whether a game is worth purchasing or merely renting. The old cost over length equation that lets people know how much their leisure time is costing them. And at 30 dollars an hour, this game is a startlingly bad investment.

That's right. Terminator Salvation, a 3rd-person shooter in the kill.switch mold, is just two hours long, with no replay value of any kind. That's not entirely fair—I played through the game twice. On the hard difficulty I died constantly and the game lasted four hours, on the regular difficulty I didn't die once and it lasted two. It's made up of nine extremely short levels, which include four separate rail shooter sequences. Now, there's nothing I like better than a good rail shooter; heck, the last Terminator game had an all-rail shooting bonus co-op game that added significant value to an already wonderful title. Here they don't accomplish anything other than to put sharp focus on just how little game there is to play.

The game's story acts as a prequel to the movie, rather than an adaptation of it. So rather than the heartwarming story of an incurious cyborg who learns to love, the player is s treated to a tale about the time John Connor shot a bunch of terminators for nebulous reasons to no great effect—although it does serve to introduce a number of the characters who are present for literally seconds in the film and had no impact on the plot whatsoever. So there's that. Also, in a sight all too common to licensed games, the lead actor did not lend his likeness or voice to the production. As an upside though, all of those aforementioned extraneous characters who don't do anything look and sound exactly like they did in the film.

There is one way all those additional characters can come in handy now though, that's when playing in co-op mode. Yes, to its minor success and crippling detriment, this game is specifically designed to be played, like Army of Two, co-op at all times. There is never a point a game in which John Connor is not accompanied by at least one of his resistance sidekicks. The upside of this is that when played with two people at once the game is at least a competent third-person shooter. The downside is that when attempting to play single player the experience is basically broken. The flaw is built right into the game's rather basic gameplay design. Every gunfight follows the same simple pattern, which will no doubt be familiar to anyone who's played a shooter in the past few years. Duck behind cover—shoot enemy from behind that cover—move to next cover—repeat. This simple formula is made even easier by the way the enemies, either out of politeness or bad programming, refuse to ever rush around or destroy the low concrete walls that scatter every level. They have one good thing going for them though, which is where the problem starts. All of the enemies the player will encounter during the game are completely bulletproof when shot from the front. 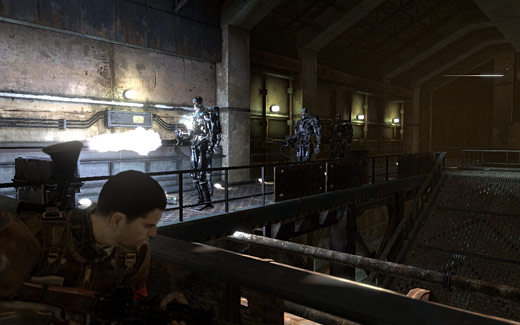 This isn't a problem in co-op mode, where the player who isn't being shot at can simply fire off a few rounds into the robots' entirely unprotected power supplies (note to self: when I design killer robots make sure they have more armor on the side they can't shoot from—actually you know what? Make robots that can shoot both forwards and backwards at the same time. Problem solved.) In single player mode however, the way the game's AI "works" conspires to destroy any possibility of enjoyment one might have.

It seems that the robots are blessed with the ability to know which of the humans shooting at them is being controlled by a real person and is therefore actually killable. As a result, they will almost always point directly at the player's cover, firing endless rounds of ammunition. At the same time the player's AI partners are—perhaps to compensate for their complete invulnerability mentioned above—totally unable to hit anything ever. I would roughly estimate that 60% of my combat time in the game was spent huddling behind cover, pinned down by enemy gunfire, frustratedly waiting for my AI to get in a lucky shot and either kill the things or get in enough glancing blows it would turn around and face them, finally giving me the chance to put it out of its misery.

It doesn't say much for a game about shooting robots that the only time I actually enjoyed shooting those robots was was right at the end when I had access so many grenades and rocket launchers that I was able to completely bypass the very cover mechanics that the game was built around. Well, that and the rail shooter sequences, but since rail shooting is basically impossible to get wrong it's hard to give them any credit for that.

Terminator Salvation is abject in its failures. I almost wish there was something I could give it credit for, but as it's impossibly short and incompetently made, there's just no reason to ever play Terminator Salvation. Heck, when looked at from an economic standpoint it doesn't even make sense as a rental. Five dollars an hour is just too much to pay for a borderline unplayable mess, although, come to think of it, I'm having a hard time thinking of a price at which a game is bad as Terminator Salvation would seem like a good deal. Rating: 2.5 out of 10.

Disclosures: This game was obtained via rental and reviewed on the Xbox 360. Approximately 6 hours of play was devoted to single-player modes (completed 2 times) and 2 hours of play to multiplayer modes.

Parents: According to the ESRB, this game contains violence. Luckily, all of that violence is directed squarely at robots bent on destroying humanity, so on the scale of violence from firing waterguns at trees to beating puppies to death with a hammer, the needle is buried squarely on the innocuous side.

Deaf & Hard of Hearing: There are subtitles for all of the dialogue, although, since there's not much of a plot, that's not a huge accomplishment. The camera also does a great job of staying oriented on enemies and reminding the player where they are, so there aren't any problems with needing to hear gunfire to know that you're under attack.

This looks like a good game, but Idk if Id buy it with my money…I use Lockerz, thats where I got my game system, but I don’t really have the money for games. Email me if you want a lockerz invite:)