The Thrill of Tedium 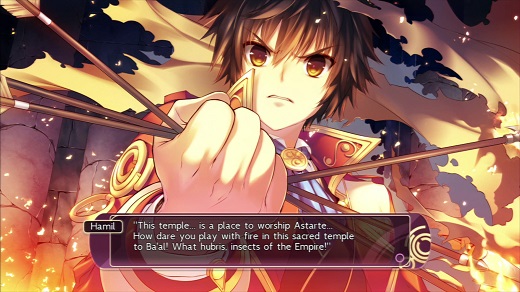 HIGH Battling the 'thing' that came out of the mine.

LOW Will this villain never shut up?

Going into any visual novel—even a hybrid visual novel/strategy RPG, as Tears to Tiara 2 describes itself—players have expect a measured pace, at best. With the majority of action centering on characters having conversations, developers have to work incredibly hard to make their dialogue and situations interesting enough to justify keeping the virtual pages turning. It's not enough to have a great setting and a few interesting faces—without thrilling events, high stakes, and forward momentum, the story sits lifelessly on the screen.

Set in a fictionalized version of Europe during the rule of the Holy Roman Empire, Tears to Tiara 2 (TTT2)tells the story of Hamil, a rebel leader and high priest who leads a rebellion against his country's oppressors. He's aided by the goddess Astarte, who's been moved by the plight of her faithful followers and has chosen to come to them in their time of need. Surprisingly, having a goddess on their side doesn't make the rebels an overwhelming powerhouse, and the game's plot follows their attempts to force Rome out of Hispania once and for all. At least, that's what the plot was about for the first 20 hours. I can't speak to what happened next, as I was unable to make it even halfway through the game—it's just far, far too dull.

TTT2 makes a decent attempt to hook its players, opening with a human sacrifice and the main character being forced to unleash his hidden magical powers in order to save the day. Then it does the least imaginative thing possible and jumps back in time so players can spend two hours following the dishwater-dull protagonist as he constantly refuses to show the slightest spark of personality or leadership.

To be fair, it makes sense from a narrative standpoint—Hamil is the last descendant of Hispania's ruling bloodline, and if Rome suspected he was anything but a simpleton, they might execute him to ensure that the population remains pacified. Unfortunately, Hamil doesn't get much more interesting after he becomes the leader of an open rebellion. A strong personality is key attribute of leaders in the fields of both politics and video games, and Hamil simply isn't effective in either role.

The supporting cast is equally lifeless, composed of stock characters from the JRPG handbook. Grizzled veterans, mysterious mages, youngsters eager to prove their place in the world—even Astarte, the goddess come to earth, is presented as a fairly by-the-numbers 'ditzy princess' type. I can only hope that these characters eventually gain a shred of depth via their experiences and monologues about their backstories, but right up until I dropped the game they came off as the most cliched cast imaginable. The fact that their dialogue is flat and lifeless just makes it worse.

It's not a complete wash, though—if nothing else, at least the SRPG sequences are well-handled. Every hour or so, the player will get to wage battle against foes using classic grid-based SRPG gameplay. These can be simple fights, high-pressure escapes, area defense sequences, and more—no two missions were simple rehashes, and the level of challenge was extremely well-balanced.

Whether I was battling soldiers, wasps or twisted Lovecraftian abominations, the battles were a consistent high point in TTT2, and had they been separated by anything less than half an hour of dull conversation each, I probably would have pushed my way through the storyline just to see all of them. Outside of combat there's a decent amount of preparation-based content as well, with characters able to train up in a secluded battlefield, as well as craft new weapons from found materials. None of it is strong enough to overcome the crushing boredom of the visual novel aspects, though.

Even when it's cut with well-made SRPG sequences to keep people playing, a visual novel must be interesting if it wants to hold an audience. With inert characters, forgettable villains, and an achingly slow plot, Tears to Tiara 2 never offers a reason for anyone to keep reading. It's a pity, too, because these developers are obviously talented when it comes to the SRPG and art elements—hopefully next time the story will be more interesting, or failing that, there'll be less of it. Rating: 4.5 out of 10


Disclosures: This game was obtained via publisher and reviewed on the PS3. Approximately 20 hours of play was devoted to single-player modes, and the game was not completed.

Parents: According to the ESRB, this game contains blood, fantasy violence, language, suggestive themes, use of alcohol and tobacco. Drinking, smoking, quite a bit of swearing—if your older teens are into dull strategy games, fine, but no one younger, please. Also, from the religious standpoint, just be warned that this is a game largely about 'pagans' fighting for freedom from the oppressive heel of monotheists, and is set in a thinly-fictionalized version of Europe. In case you're wondering if this could lead to interesting conversations, that's a possibility.

You all do realize this is a Hentai/Porn game with all the naughty bits removed? Mind you the first game was a Hentai/Porn game. This one is either one with stuff removed for sale in the west or that’s what they were going to make it as but gave up and made it into a normal visual novel.

Agreed. After 1 hour of this crap i stopped “playing”. Playing isn’t even the right word, as the only “gameplay” to be found was one quick battle playing as an overpowered dark version of the main character, born out the rage (oh- the ingenuity), in a poor attempt of the developers to start in medias res. To be sure, i didn’t know what i was getting into. From the footage i saw, the game seemed to have a bigger focus on combat, but after what felt like an aeon of wasted time watching he first VN-section, i came to the… Read more »