In Space, You Will Definitely Scream 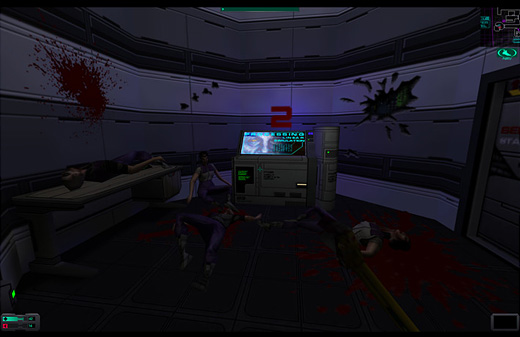 HIGH The first journey into the mind of your foe.

LOW Fumbling with my psi-amp while being peppered with gunfire.

WTF That midwife is just… yikes.

Making a list of all of the games System Shock 2

has influenced would be a waste of time, since it's far simpler to explain that "any FPS with RPG elements" can count themselves as inheritors of its legacy. Skill progression, hacking, upgradable weapons, intuitive inventory management… System Shock 2 transcended its genre to become the first true first-person role-playing game (FPRPG). That it had one of the all-time great video game stories is just icing on the cake.

Long unavailable for purchase and largely unplayable on modern systems, System Shock 2 is now easily accessible to the generation of gamers who grew up on the games it inspired. This raises a question, however—is System Shock 2 worth going back to? Is it still a great game nearly fifteen years later, or has technology passed it by? Is it now nothing more than a footnote in game design history?

The answer is unequivocal—it's still a great game. (Sorry, but I couldn't wait until the end of the review to get that out.)

From beginning to end System Shock 2 is an amazing experience, and from a design standpoint, nearly flawless thanks to strong storytelling, well-implemented gameplay mechanics, and fantastic worldbuilding. Slap modern graphics and animation on this thing, and it could be released today and have no trouble competing with modern titles.

System Shock 2's story will likely feel familiar to many, since in addition to the game's mechanics being cribbed almost everywhere, the game itself has been essentially remade twice. The first time was System Shock 2's own developers reusing the story structure for BioShock, and the second, less ethical, remake involves Dead Space basically lifting the plot wholesale.

In any event, the story involves the player (a naval officer stationed on the first ship to have hyperspace capabilities) waking up from hypersleep to discover that everything has gone to hell, and monstrous human/alien hybrids are now wandering the halls of the vessel. It's a premise that borders on the cliche, but System Shock 2 makes it work through excellent writing and voice acting (note: the use of "audio logs" was revolutionary here), as well as an incredible understanding of dramatic pacing.

As players travel through the UNN Von Braun they'll learn about its crew in dribs and drabs, gradually discovering just what happened while they were in cryostasis. It's a compelling tale full of stunning developments and great character moments—in all of its successors, it's rare to find a game that makes as good an argument for tracking down every single audio file as System Shock 2 does. 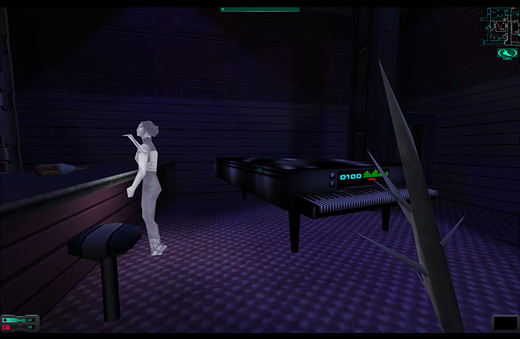 While the graphics may not have aged especially well (the textures look fine, but the models are extremely blocky) System Shock 2's villains still make quite an impression. From the parasite-infected hosts that scream about togetherness while firing shotguns, to the psychically-gifted lab monkeys, to the service robots that wave a friendly hello before self-destructing right in the player's face, System Shock 2 features an endlessly creative suite of foes who only become more terrifying as the player delves into their origins.

In addition to the story and enemies, the gameplay has also held up well over time, offering a master class in how to handle stealth and horror in a first-person setting.

As the player creeps through the levels of the ship, they'll find themselves constantly scrounging for ammo and forced to hide or run from more powerful enemies. It's only by using upgrade modules (found in the environment or as rewards for progress) that stats can be upped to where players will be able to blast apart enemies or cut through security systems with ease.

Despite all of these successes, there are a couple of nagging problems that keep me from being able to wholeheartedly recommend System Shock 2 to anyone.

The first is a minor technical issue caused by the upgrade to modern displays. While the main graphics all look fine (super-crisp representations of low-detail textures) the game's 2D overlaid heads-up display (HUD) is built from from the same number of pixels as ever, which means at higher resolutions it shrinks dramatically to the corner of the screen. My attempts to play the game at 1080 resolution left me unable to read much of the onscreen text despite sitting four feet away from a 32 inch screen. Practically speaking, almost everyone is going to have to deal with "classic" resolution.

The second problem is bigger, and it's been there since the original release—the psychic powers have a prohibitively large drawback.

In theory the psychic class is a useful dilettante, with access to a wide variety of attack and defense powers, as well as the ability to buff nearly any skill as the situation demands it. While other characters have to use stims and implants to improve their stats, a psychic can be anything they need to for a few minutes at a time, so long as their psi-boosters hold out. This all works fairly well, except for a huge hole in the system—there's no way to quickly switch powers.

All abilities are triggered by "firing" a psi-amp that sits in the main weapon slot, but they have to be selected from a multi-tiered menu first. This would be a minor inconvenience if the game paused while players were making their selections, but it doesn't—like all menu navigation in the game, it has to be performed in real time, which makes dealing with any of the sudden combat encounters that the game springs on the psychic players prohibitively difficult.

Those issues aside, System Shock 2

can still be thought of as an all-time classic for any number of good reasons. Great setting, fantastic level design, and a complete lack of terrible FPS boss fights chief among them. Above all of those qualities, however, is the key element that makes it just as enjoyable today as it was more than a decade ago—complete mastery of atmosphere and tone. So long as players are willing to accept graphics a few generations past their prime, they'll find a chilling experience that was peerless in its day, and still incredibly effective in this one. Rating: 9.0 out of 10.


Disclosures: This game was obtained via publisher and reviewed on the PC. Approximately nine hours of play was devoted to single-player modes, and the game was completed.

Parents: According to the ESRB, this game contains animated blood and gore, animated violence. Parents should take the game's rating very seriously. The graphics may be blocky, but they're still depicting some extreme gore. There's also some instances of alcohol being used as a healing item, so be sure to consider that in your deliberations.

Deaf & Hard of Hearing: You will have a very mixed experience. All directions and audio logs have text that can be read, but a good part of the atmosphere—not to mention warnings about approaching foes, are audio-only. It's still playable, but it's definitely going to be more of a challenge.

Your technical issue regarding the size of the HUD elements can be fixed easily. There’s a configuration file in SShock2 folder, cam_ext.cfg. Turn up the “d3d_disp_scaled_2d_overlay” parameter, and you can make the menu items as big as you like. I set mine to 64 for a pleasant time on 1920×1080.

I thought overall that Daniel’s review of this game was quite decent. But there are a few points I feel I need to address, even if just in the comments, for the author’s own future knowledge. “any FPS with RPG elements can count themselves as inheritors of its legacy” -I would count games such as CyberMage: Darklight Awakening (1995) or Strife (1996) as being futuristic FPS games with RPG elements that started paving the path towards System Shock 2. Those games are not as good as SS2 of course, but they are definitely FPS games with RPG elements that predated… Read more »

For those of you looking to try this game, the psi powers aren’t that tough to switch between… it’s just that it’s not explained ANYWHERE in the game.

All the Psi tiers are assigned to F1-F6. Tapping F2 (for example) will cycle through all your tier 2 Psi powers that you’ve invested in. Just do NOT reassign these keys manually – I’ve got no idea how to restore them short of reinstalling the .ini, so take care.

Thank goodness for GOG.com. I have been dying to play old games like this one and thanks to GOG I can do so legally. Plus they get the update treatment AND i can show my younger friends what I was playing at their age. Granted even with the tune-up System Shock 2 is still pretty hard on the eyes compared to the bump mapped million polygon creations of today, but I’ll take that atmosphere, story progression and action and put it up against any Resident Evil or Dead Space game out there. This is a must play and if you… Read more »

After all these years I’ve still not quite been able to finish this fabulous game. I keep coming back to it but fear usually gets the better of me. I’m also loath to let it actually end given how much I love it. *That* moment, which I believe you’re referring to in your high point, is one of my favorite moments in gaming. Agree with you about the PSI powers. I always specialized in these for a bit more variety, but I did feel I was dicing with death a bit more than I reasonably should. It all adds to… Read more »