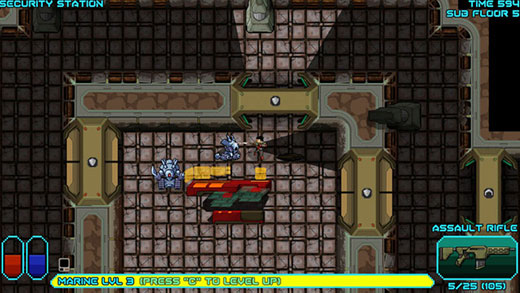 HIGH Using psychic powers to crush foes in a cloud of shrapnel.

LOW Going five levels in a row without finding a single bullet.

WTF I starved to death because I didn't eat for an hour? Do I have a tapeworm?

The Sword of the Stars series takes players on an empire-building journey through the distant future, allowing them to research and design their own ships to conquer alien worlds and guard precious trade routes. It's a rich and detailed universe with six default races, each offering their own distinct cultural lore. Naturally, the developers of the series saw value in leveraging that content outside the core series, and The Pit was born: a game in which all of the politics and complex strategy of the source material is jettisoned so that humans can shoot scary monsters in a dungeon.

A formal, turn-based Roguelike, The Pit sends a single soldier down into the depths of an ancient research facility in the hopes of finding a cure for a plague that's ravaging a key human world. To accomplish this, the player will traverse over 40 levels jam-packed with enemies to fight, traps to overcome, and resources to craft.

All of this is realized in a bright, colorful style that’s a departure for the series, but one that’s internally consistent and gives the game visuals that suggest a lighthearted romp. As such, it’s jarringly effective when monsters collapse into a pile of shattered gore upon their deaths.

Speaking of the graphics, the creature design is something of a high point. While there is a certain amount of palette-swapping going on, the raw number of models on display is impressive, and will ensure that players never get bored with seeing the same creature over and over again during their trip to the bottom. Sadly, the monsters are the only thing the game does entirely right.

There's a large amount of technology and weapons available to find and construct using a crafting system, but terrible balance issues keep it from working as it should because none of the starting characters are well-suited for survival if they play to their strengths.

The Marine is good with guns and knives, but lacks the skills necessary to find more ammo and repair weapons. After starting the game, he'll die while trying to fight beasts with his bare hands. The Engineer can craft weapons and ammo, but isn't strong enough to carry the massive number of components necessary to make it a viable option. The Scout's bioengineering ensures she'll never go hungry, but she's not good at surviving in general.

The only hope a player has of making it through the game is trying to bring up their character's weak stats up as quickly as possible—only well-rounded characters have a chance in The Pit, which makes me wonder why the developers bothered creating classes at all, instead of allowing players to build the character they want from the outset.

I just referenced 'going hungry' in the paragraph above, and this mechanic is the game's biggest misstep: the inclusion of a 'food' system that needs to be looked after in addition to the player's general health.

This hunger stat is a disaster, both because the randomness of the game's level generation means that players may not find enough food to stay alive no matter how well they play, and also because the frequency at which the characters need to eat defies all sense or believability

The game's turns are called 'moments', which roughly work out to three seconds each. Every two moments (6 seconds) players lose a 'food point'. If they run out of food points, they starve to death. Since characters start with around five hundred food points, if they don't eat a full meal every fifty minutes, they will die. It's a completely nonsensical complication that serves only to make the game difficult for difficulty's sake, and breaks the logic of the game's world.

While roguelikes are famously hard to complete, I think it counts as an admission of the too-high difficulty that the first piece of additional content for The Pit, the add-on 'Mindgames', sands off most of the core game’s rough edges and turns it into something more playable. The new Psion class starts with a psychic attack that's quite powerful, and with a little bit of development he can slow his metabolism and spontaneously generate food out of thin air, effectively canceling out the disastrous 'hunger' system.

Without the Mindgames add-on, The Pit is a good-looking roguelike with severe balance problems that render it too difficult to play. With the add-on, it's more accessible, even to players who are new to the genre. The downside is that it feels like the developers are charging five dollars to patch their semi-busted game. There's enough new content in Mindgames to keep it from feeling like a shakedown, but it would have been nice if the devs had addressed The Pit’s flaws without forcing a new purchase. Rating: 5.5 out of 10


Disclosures: This game was obtained via publisher and reviewed on the PC. Approximately 30 hours of play were devoted to single-player modes (completed 1 time). There are no multiplayer modes.

Parents: This self-published game was not rated by the ESRB, this game contains blood, violence. You may not want your children playing this one. Despite the bright aesthetic, it's loaded with blood and gore. With humans, animals, and even yeti being graphically shot to death, it's something you might want to hold off on until they're older teens. There's no salacious content or booze, though, so that's something.

Deaf & Hard of Hearing: It's a turn-based roguelike. So yeah, it's almost completely accessible. The only thing you'll be missing out on are distinct sound effects that the various monsters make even when they're not visible onscreen—which can provide useful advance warning about what might be lurking through the next doorway.