Bring A Gun To A Swordfight 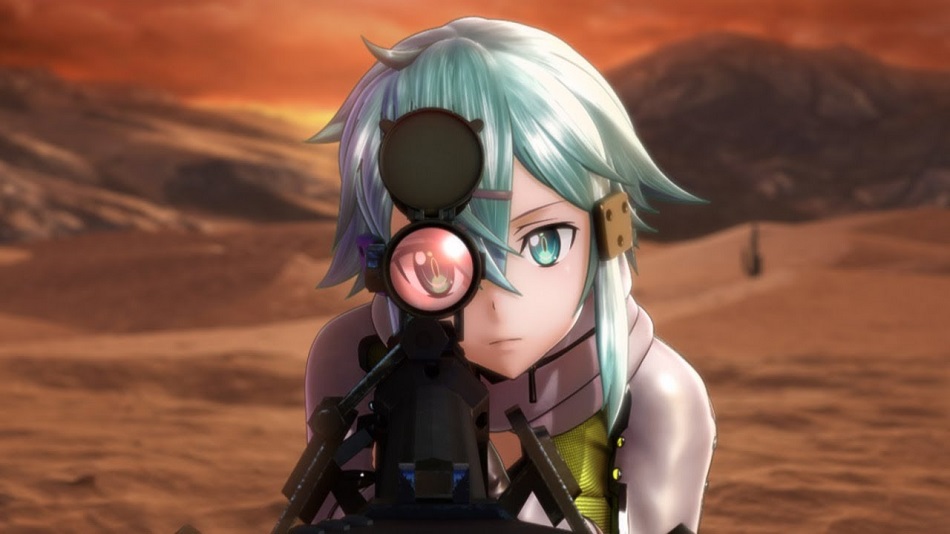 LOW Not being able to shoot up while flying foes can shoot down.

WTF I’m not super-clear on what the purpose of ‘Kiriko’ was.

Setting a singleplayer campaign in an MMO’s world seems like a crazy idea. Playing not as a hero on an adventure, but as a person in an online game where adventure is happening would seem to add an extra level of artifice to the game, further distancing players from the experience.  In practice, though, Sword Art Online: Fatal Bullet understands that the people who play online games bring real-life drama along with them, and that subject matter can be just as worthwhile as tackling a dragon hoarding a cache of magic crystals.

A 3rd-person shooter set in a VR MMO, Fatal Bullet casts players as a brand-new player dragged into the game by a childhood friend who needs help with an in-game event. A lucky break ends up awarding the player the two rarest items in the game – a grappling hook to let them traverse the world vertically, and an AI partner that’s unusually helpful. Suddenly the player is surrounded by people accusing them of cheating, hangers-on who want to be near success, rivals who want to steal what they have, and, naturally, the cast of the SAO franchise who can be added to the party after the first couple of hours.

Fatal Bullet’s gameplay is built around traditional action/RPG elements, with things skewing heavily towards the RPG side. The player goes to the hub world, collects bounties, goes treasure hunting, and performs story-based missions, then heads out into fields and dungeons to blast away at various robotic enemies. They’re allowed to bring along three AI partners, and the available characters do a good job of filling out traditional MMO archetype slots. There are tank characters with skills to attract attention and soak up damage, healers, snipers, and support characters that buff the team in various ways.

Since the game provides the chance to play almost any way someone wants, I tended to get in close to blast away with SMGs, and with the right team backing me up, I could be assured that my wounds would constantly be healed and that stronger enemies would find themselves stunned or set on fire. I attempted a few different approaches, building sniper, tank, and support loadouts, and never had trouble assembling a team to keep things competitive. All of these builds and skills are also easily transferable to the optional online component, where people can team up with other players to farm bosses for materials or fight each other to determine who the best is. 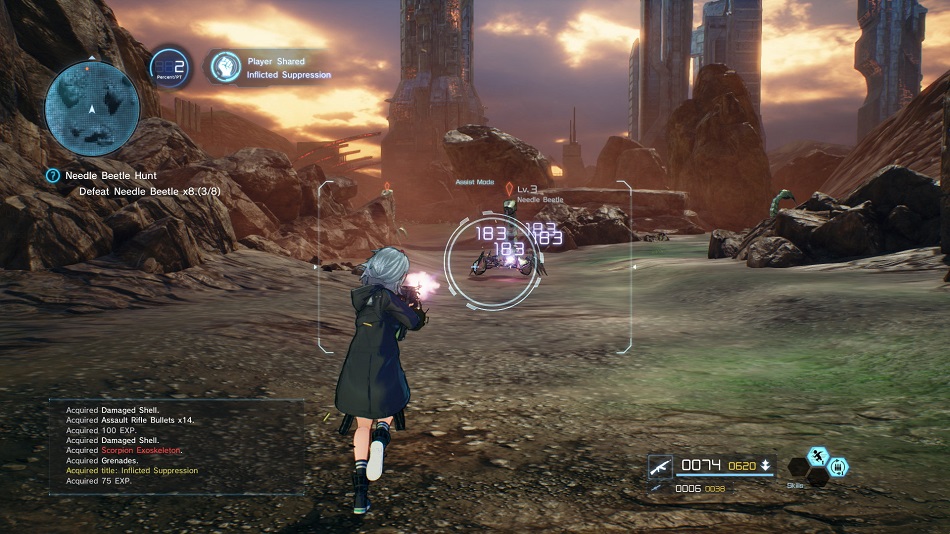 Unfortunately, this flexibility goes to waste thanks to repetitive enemy encounters — there aren’t enough enemy types to fill out the campaign. In the first zone players will fight a few different types of walking and flying robots, some scorpions, and the occasional metal bee. All of those enemies will reappear for the rest of the game with new color schemes and buffed stats, but no significant changes. New zones will introduce one or two new new enemy types, but there just isn’t enough variety.

Also troubling is Fatal Bullet’s crafting system, which baffled me to no end. Supposedly weapons can be upgraded by finding materials in the field, either in chests or from enemy drops, but I was never able to put the parts together until long after I’d found or purchased far better weapons than I could have crafted myself. Later, I discovered that material drops are restricted to certain difficulty levels – the consequence being that players looking to take it easy will effectively have the entire crafting part of the game closed off to them.

Despite those stumbles, where Fatal Bullet truly excels is in its storytelling. Never really focusing on the game-within-a-game’s story, the main plot points here are all about the players, why they’re playing MMOs, and what they hope to get out of the experience. Issues addressed include PTSD, stalking, social anxiety, and others. The script delves deep into the idea that while building a virtual community can be a positive kind of social interaction, neglecting real-life interactions can be dangerous. Also, there’s a murder-mystery storyline which plays out in a side story.

Sword Art Online: Fatal Bullet is a perfect game for anyone looking to get a taste of what MMOs feel like without wanting to dedicate hundreds of hours of their lives to the experience, and perhaps more importantly, it has an ending. Rating: 7 out of 10

Parents: According to the ESRB, this game is rated T and contains Mild Language, Suggestive Themes, and Violence. In addition to the standard JRPG penchant for suggestive costumes, there’s some discussion of romantic obsession that definitely earns the game the T rating. The language is so mild I didn’t notice it, and almost all of the violence is within the context of virtual characters shooting virtual robots.

Deaf & Hard of Hearing Gamers: I played most of the game on mute and had no trouble – there are subtitles for all dialogue, and an incredibly useful mini-map and HUD to keep you apprised of enemy locations. It’s fully accessible.