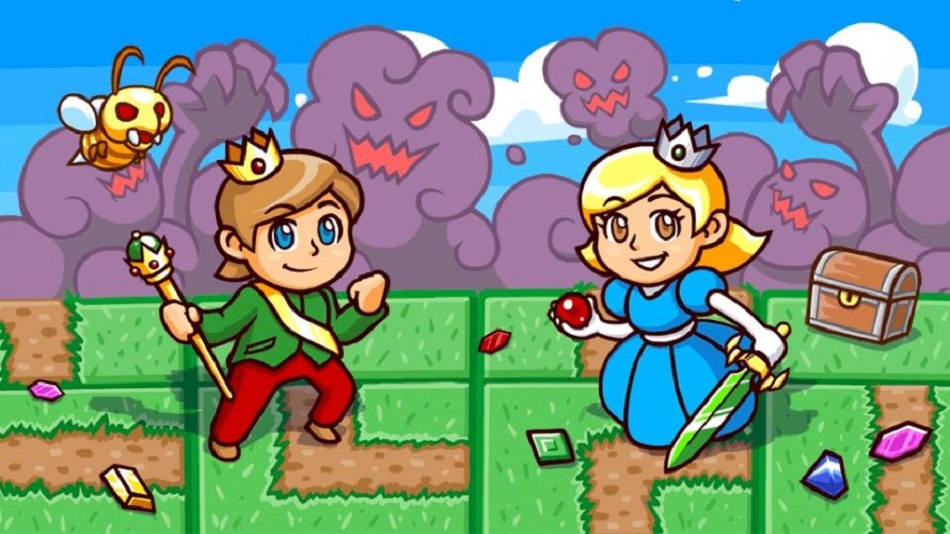 HIGH Solving every floor of the tower in quick succession.

LOW Grinding the same level over and over again to get strong enough to fight the boss.

WTF I’m supposed to click on the boss to kill it? How could I have guessed that?

As developers strive to transform every conceivable ‘casual’ genre into an RPG-lite, fresh ideas are harder and harder to come by. There’s been solitaire, boggle, taipei, and literally dozens of match-3 RPGs. It was only natural that someone would eventually get to Pipe Dreams-style path building. What couldn’t be predicted is that a developer would transform that simple idea into something as compelling and addictive as SwapQuest.

Set in a kingdom besieged by demons who’ve escaped imprisonment in a magic crystal, SwapQuest takes players on a journey as either a prince or princess. The goal is to retrieve a magic sword and reassemble the prison crystal in order to lock the demons away once more. This is accomplished by guiding the chosen royal through a series of twelve fields (and four boss fights) by swapping tiles around to create a path around dangers, or straight into them if it’s time to farm experience.

SwapQuest‘s mechanics are deeper and more complex than the premise would suggest. In addition to creating a path by moving squares with 2, 3 or 4 exits on them, the player has to direct their avatar along the path that’s created. The royal will walk on their own, but they need to be pushed in a direction every time they have more than one choice. They can also reverse direction or stop,  so the player is able to keep them from blindly wandering into danger – which they otherwise would. Essentially, the player has to use two entirely different skillsets at any given moment – at times it pushes this title to the very edge of what can fairly be called ‘casual’ gameplay.

Working in classic 16-bit style, SwapQuest‘s devs have put a huge amount into each level. Every one has a completely different set of monsters and background art, while also managing to include unique twists. A ‘lost in the desert’ level constantly changes the direction of travel, the ‘burning city’ has players pushing back fires, and a ‘dark mine’ forces players to shatter glowing crystals that spread through the level, lighting their way. Then the campaign wraps up with a challenge tower that sets aside the constant treadmill effect and replaces it with a series of trap rooms which demonstrate that the game’s systems work just as well in straight puzzle structure as they do in the rest of the action-heavy campaign. 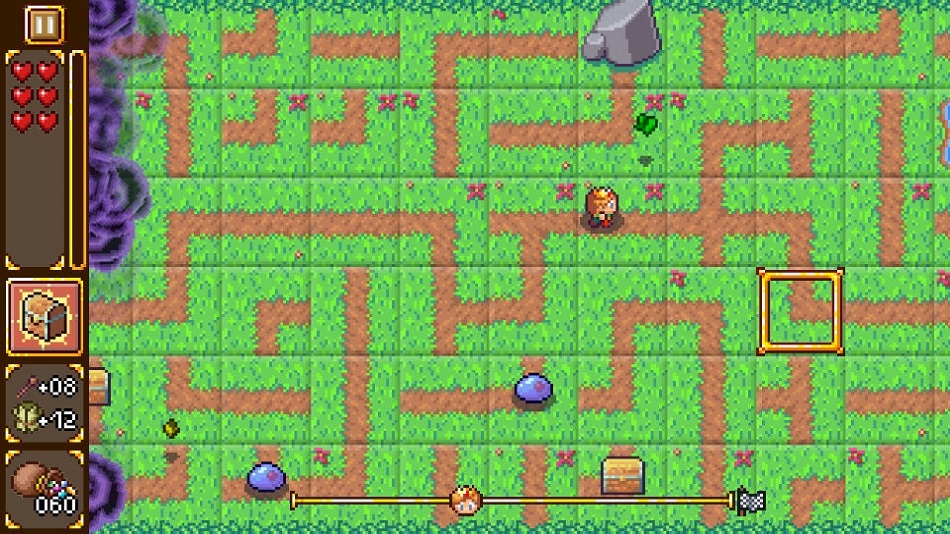 Each area in SwapQuest is littered with obstacles to be avoided, monsters to fight, and chests to open. However, killing enemies is the only way to gain the levels necessary for late-game survival, so much playtime is spent building paths to put characters into danger — something of an interesting reversal. When killed, monsters explode into showers of health and jewels that need to be collected, which is where the gameplay gets a little too complex for its own good.

It’s necessary for players to pick up jewels to upgrade weapons and armor, and if they can’t grab the hearts, they won’t be strong enough to keep fighting enemies. The problem is that the player’s avatar has to actually walk within a square’s distance of each item to pick it up. Between the pressure of the scrolling map and the character’s slow walking speed, this can prove extremely frustrating. The player can speed things along by swapping gem-covered pieces into their path, but it’s nearly impossible to grab more than a fraction of the gems scattered around the screen. Since players use the left thumbstick to move a cursor around, maybe the devs should have used it to collect gems and hearts as well — it would have cut out a lot of frustration without having much effect on the difficulty level.

I should also mention the endgame difficulty, which spikes to a ridiculous extent. Throughout the adventure, the player can choose their path on their way to the secret tower. Then there’s a boss fight that’s pretty tense, but largely fair. Right after this boss, the game announces that players didn’t get all of the crystals needed to finish off the demons, and they’re dispatched to play the levels they didn’t select the first time. This shouldn’t be too bad since the player has just found a magic sword of legend and should be able to breeze through the levels. Sadly, the developers decided to jack up the endgame monster health and strength to the point that they’re difficult for a fully-leveled character to complete than they were for a level one character the first time through.

This is a bizarre choice that strips the player of any sense of accomplishment right at the end of the game, especially when they have to fight the last boss a second time, and the new form is way, way cheaper than its old one. While it’s theoretically possible to upgrade to the point that the royal can face these challenges, those upgrades cost a lot of gems – earning enough means farming levels over and over again, struggling to pick up enough to make a difference while avoiding the new, super-powered monsters.

SwapQuest does a great job of transforming a casual classic into the foundation of an RPG-lite, and for the vast majority of my time with it, I found it surprising and clever. It’s just too bad the developers ramped up the endgame challenge for clear reason. I was seriously considering giving the game a second playthrough to see how the other characters leveled up and transformed over the course of the adventure, but the prospect of suffering through the endgame again made put the game down after the credits rolled. Whatever the reason behind the difficulty, the devs wound up shooting themselves in the foot when they should have been sticking the landing. Rating: 7 out of 10

Parents: According to the ESRB, this game is rated E10+ and contains Fantasy Violence. This is as safe and kid-friendly as violence gets. It’s just unrealistic fantasy creatures (squids, demons, vampires, yetis) exploding into clouds of money when killed. It’s harmless.

Deaf & Hard of Hearing Gamers: There are no notable audio cues, and all instructions are offered as text.