The Gun Is Hardware 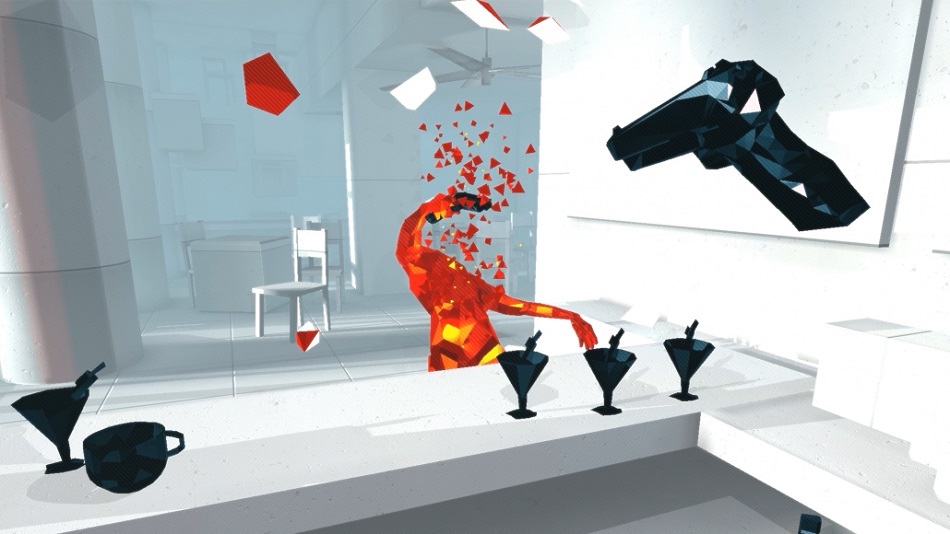 HIGH Punching a goon out of a helicopter and having him land at my feet seconds later.

LOW Missing with five throwing stars in a row.

WTF Advancing time by making a ‘yadda yadda yadda’ motion with my hand.

It’s SUPERHOT, but now players are inside the game, rather than just playing it. What more need be said, really? A lot, probably, since stepping into the world transforms everything about the experience.

(For an in-depth recap of the original, read Mike Suskie’s or Corey Motley’s full reviews.)

Based on last year’s title of the almost-same name, SUPERHOT VR puts players in the role of a gamer in a small room who’s jury-rigged a virtual reality system out of a stack of old Amiga 2000s. Armed with a bunch of bootleg discs, players can delve into a monochrome world where they’ll gradually discover that videogame piracy is a more complex and dangerous endeavor than they’d first suspected.

That’s just the story, though, which is largely unimportant to SUPERHOT‘s gameplay. Just like the original, the hook is that time only progresses when the player is in motion. The action is controlled with Moves — one for each hand — which allow them to freely engage with the stationary locations they’re placed in. This the big change from the non-VR version — now instead of freely exploring levels, each area is broken up into a series of setpieces. The player starts at one spot, defeats all of the shining red figures contained within, and then warps to the next.

While SVR‘s gameplay is more contained than SUPERHOT‘s, I found it much deeper and more complex. Rather than just sweeping around a map, players are asked to move their whole bodies to survive SVR‘s levels. Dodging bullets is the name of the game, and players have a good four meter square in which to move around as they sidestep, duck, and lean out of the way of incoming fire. Players can hide behind cover, slice bullets in half with knives, even block them with frying pans – there’s a huge number of tricks to be learned, and the devs do a stellar job of introducing them one at a time. 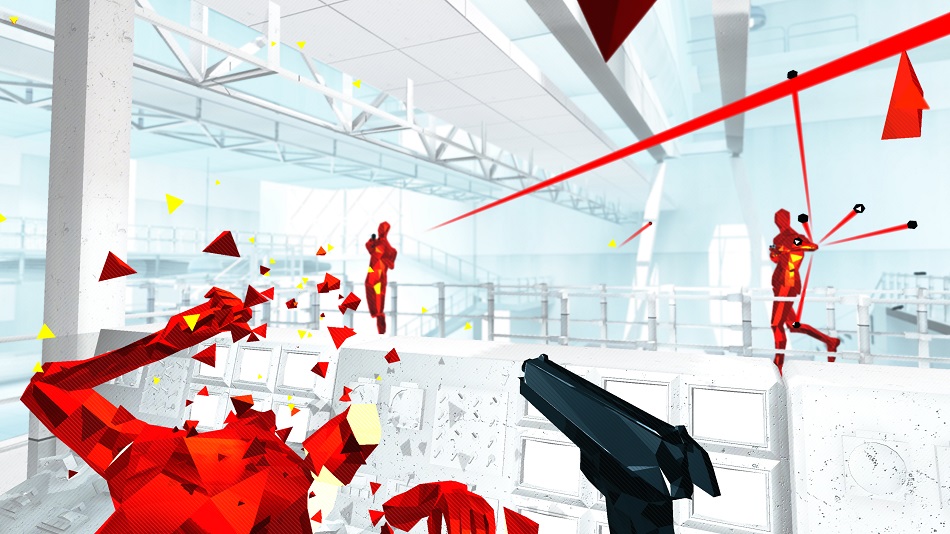 Level design is probably SVR‘s strongest point. Every area is based around a single location, and the developers have found a way to tell a short story in each without traditional narrative. To be fair, most of these stories are ‘get to a place and kill a guy’ or ‘guys are trying to kill you, escape from them’, but it’s not the complexity that impresses here, it’s the immediacy. By jumping from one area to another, the devs invite the player to imagine the pieces in between, building a story out of a series of moments.

For example, one level starts with the player grabbing a gun and executing someone so that they fall into an open grave. Then they move into a maze of tombs, where the victim’s friends have set up an ambush. Finally the player finds themselves on the other side of the planned execution, turning the tables in a dramatic fashion. Looked at in isolation, these are just static shooting galleries. But, as players experience them, they’ll naturally fill in the blanks themselves, creating memorable experiences from a few intense moments of action.

SVR‘s has only two real drawbacks. The first is an overcommitment to immersion. Once the game begins, the player IS the gamer in the cramped apartment with all the AMIGAs. Instructions are few and far between, and all of them happen strictly in-world. There’s not even a pause or menu button, which actually created a bit of trouble for me when I got stuck at the end of a level because I’d looked the wrong way when the direction for what to do next appeared. Since none of the obvious solutions worked, I was forced to quit the entire game and restart the level before I found out what I was supposed to do. Including a way to restart levels wouldn’t be a terrible idea.

The other problem is throwing. When players are dodging, weaving, and shooting, the game works perfectly. When they’re asked to pick up a knife and throw it at something, SVR transforms into a baffling ordeal. I played through the campaign twice, and dreaded whenever I was coming up to a thrown-object level since no amount of practice could offer a reliable method for hitting what I was aiming at. I’m sure the developers are loathe to include a simplified point-and-shoot throwing mode since it would break the immersion that the game is built around, but right now the throwing is so frustrating it made me want to quit more than once.

SUPERHOT VR is a dazzling experience that manages to improve on what was already mind-bendingly intense. I didn’t think it was possible, but the developers have improved on SUPERHOT, cutting what little fat there was off of and leaving only the purest moments of intense violence. SUPERHOT was a completely bold and different addition to the world of FPSs, and SVR manages to do exactly the same thing to the virtual reality scene. Rating: 9 out of 10

Disclosures: This game is developed and published by SUPERHOT Team. It is currently available on PSVR, Vive, and Oculus. This copy of the game was obtained via publisher and reviewed on the PSVR. Approximately 3 hours of play were devoted to the single-player mode, and the game was completed. There are no multiplayer modes.

Parents: According to the ESRB, this game is rated T and contains violence. Lots of shooting, lots of exploding crystal people, some alcohol bottles, but not much objectionable. Be careful about younger teens playing the game, though – suicide is used as a mechanic to advance the story, and the player is more than once asked to shoot themselves in the head. This could easily be triggering for some.

Deaf & Hard of Hearing Gamers: You should be fine – sound does not play an important part in this game at all. It’s fully accessible.