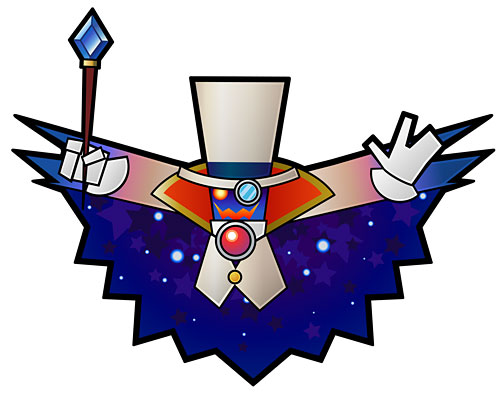 It seems like suspension of disbelief is something videogames never really have to strive to achieve. Perhaps it’s due to the relative newness of the medium, but gamers, as a species, are entirely willing to accept huge contrivances and overlook unrealism so long as the game plays relatively well. We seem to have made peace with the fact that games have no point of contact with the real world. As technology advances and game series draw on and on, it’s natural human instinct to look for patterns and continuity, which is where problems arise. Look at Mario, for example. Why did he give up construction for plumbing? Were the turtles he encountered in the sewers minions of King Koopa? Did he follow one of them down a pipe into the Mushroom Kingdom? Can the estate of Lewis Carroll sue?

The biggest question, of course, relates to Mario’s physical dimensions. Specifically, does he have two of them, or three? Various texts disagree on the subject, but one thing is clear—the schism created by these differences is fertile ground from which comedy can be grown. The Paper Mario series toyed with this idea, positing a scenario where Mario is a 2D character in a 3D world, but Intelligent Systems obviously thought there was more depth to delve. Inspired by a visual trick from The Thousand Year Door, they asked a simple question: what would classic Mario levels look like expanded one dimension into the background? So yes, the entire game Super Paper Mario is based on a gimmick, but in its defence, the gimmick is an extremely good one. Oh, and there’s some RPG and platforming stuff tossed in there as well to keep things from getting dull.

The setup is simple enough. A new villain has appeared and kidnapped Mario’s entourage, then teleported them into an alternate dimension. It’s up to Mario to follow them into that dimension and rescue them, then foil the villain’s scheme, primarily by jumping on the heads of many, many monsters. What seperates this title from other Mario games is that it attempts to find a middle ground between the action titles and the role-playing games. Combat is handled through the venerable art of stomping, it takes place over a total of 32 levels, and coin blocks still offer a wealth of cash to anyone willing to slam their head against them. The role-playing elements include gaining experience through the stomping, buying items with the coins, and having cities to return to and explore between tackling worlds. 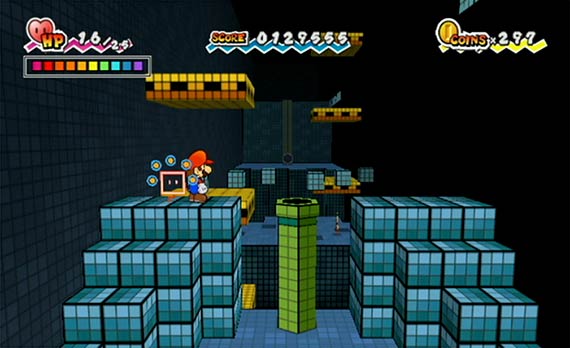 This mixture actually leads to some gameplay improvements and innovations. Now that Mario has hit points rather than lives, the platforming central to the gameplay is no longer so unforgiving. Whenever a slip of the thumb sends Mario down a bottomless pit it’s a simple matter of him being reset to the last ledge he stood on, one HP worse for wear. It feels like a revelation, after years of restarting levels, to finally be able to coast for a little while.

Another nice feature is the game’s handling of partner characters. In addition to being able to freely switch between the main characters of the franchise, the player has access to a large number of ‘Pixls’, wireframe faeries with adorbale pun names that imbue the player with special abilities, one at a time. Most of these cover a standard videogame concept, like sprinting, or dropping bombs, or swinging a hammer, but a few are interestingly unique, like Fleep, who gives the player a chance to peek behind a section of the game’s 2D background to search for hidden treasure. The most interesting and useful of them is Tippi, Mario’s constant companion over the course of the game. The game is played by holding the wiimote sideways and using it as an NES controller, but pointing it at the screen transforms Tippi into a cursor that can be guided around the suddenly-paused screen, offering useful tips on how to battle enemies, and revealing invisible doors and platforms.

The game’s most interesting feature by far is the much-discussed 3D mode. Early in the game Mario is given the ability to turn right 90 degrees and travel into the mythological third dimension, where enemies can’t touch him and what looked a moment earlier like an insurmountable wall is revealed to be nothing more than an easily passable arch. At the beginning of the game I worried that the novelty of seeing everything from a different point of view was going to wear out its welcome over the course of the game, but it never did. No, artful level design ensures that it feels like an organic part of the proceedings. In addition to helping Mario dodge incoming blows, the 3D view is used primary as a puzzle-solving tool. Whenever I reached a dead end or felt confused about what to do next, simply jumping over to the other dimension invariably pointed me in the right direction.

A wonderful side effect of the 3D view is that it allows players to appreciate just what a fantastic job Intelligent Systems did with the art design. Everything looks great in 2D, but when Mario flips over it’s amazing to see just how perfectly the simple lines and deep colours work in 3D. The devlopers essentially had to build every level twice, and not only do they work seamlessly together, but they have the (probably intentional) effect of causing the nostalgia-minded among the players to pause and wonder just what twenty years worth of 2D Mario levels might look like if given a similar treatment. 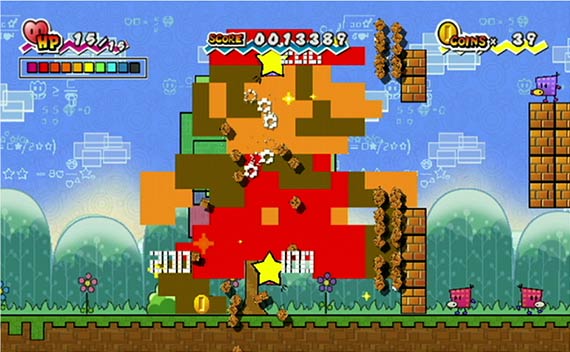 The game isn’t entirely without problems, though. The chief amongst these is the difficulty level. It’s really, really easy. With his wealth of hitpoints and ability to sidestep around opponents, Mario can generally just breeze through levels without much trouble at all. For players that aren’t especially skilled at the old fatal bouncing, playing as Bowser makes the whole thing even simpler, as he’s able to just unleash a blast off flame that can cook any opponent in seconds. Bosses can be challenging if the player sticks to controlling Mario, but, perhaps in an attempt to make the game accessible to all ages, every one of them is ridiculously easy when playing with the correct combination of alternate character and Pixl.

While on the long side for an action game, it’s very short by RPG standards, and can easily be beaten in under twenty hours. At that length, and with the focus on story sequences and level-building, it’s just too long to have much replay value as a straight action/platform game. It’s also sad to see the supporting cast relegated to such small roles. Since they can’t move into the third dimension the way Mario can, it’s impossible for the player to make progress as one of the alternate characters for very long. Generally the partners are used for very specific situations: Peach for long jumping, Luigi for high jumping, and Bowser for combat. This specialization would be much more tolerable if there were some way of instantaneously switching between the characters, as there was in Thousand Year Door. Unfortunately players are forced to go into a menu, select which character they want to play, then watch a two second animation as the characters change places. It doesn’t sound like much, but as the game goes on, the delays eventually grow tedious.

These niggling problems can’t keep Super Paper Mario from being the finest game yet released for the Wii, as well as my early pick for game of the year. There’s so much to like about this game that I haven’t even touched on the story, but that’s only because I don’t want to spoil any of it. Suffice to say that Intelligent Systems and their English localizers have once again managed to craft a wonderful story that alternately laugh out loud funny and legitimately touching. With its fascinating new take on platforming, Super Paper Mario not only provided me with a fun experience, but managed to actually affect the way I think about games I’ve already played. I can’t remember the last time I’ve seen a game this accomplished, and it’s a title that no one should miss out on. Rating: 9.5 out of 10

A little late for a review of this game, but still, a good and accurate review. I was very impressed with the game, kept playing for about a week whenever I found time, but didn’t complete it because of how easy it was. I wouldn’t be able to play for more than a half hour at a time because of the excitement factor of a good Wii game would die down after that half hour and it just got boring.