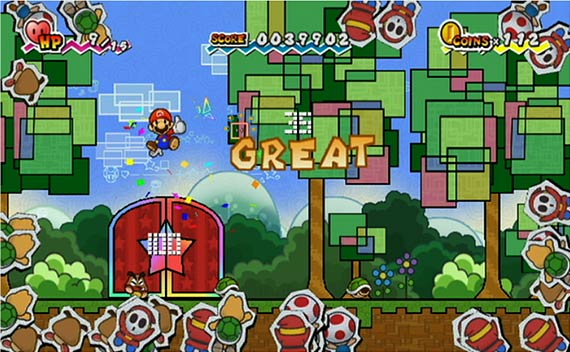 Parents, are you kidding? Your only excuse for not having purchased this for your children already is that you haven’t been able to snag a Wii yet. If that’s the case, I wish you luck. Still hesitating? Have no fear, beyond a little cartoony violence and wacky depictions of the afterlife, there’s absolutely nothing here to upset or corrupt your children.

Mario fans should grab this ASAP. Once again, the brilliant developers over at Intelligent Systems demonstrate that they have a better understanding of the Mario mythology than anyone else.

Deaf and Hard of Hearing gamers have little to worry about: beyond the beep that warns of low health and the tinkling sound that accompanies the occasionally hard to see secret panels, there are no audio cues and nothing you need to know that isn’t printed on screen. You’ll have no problems.