Adventure Has A Name… And A Lot Of Guns 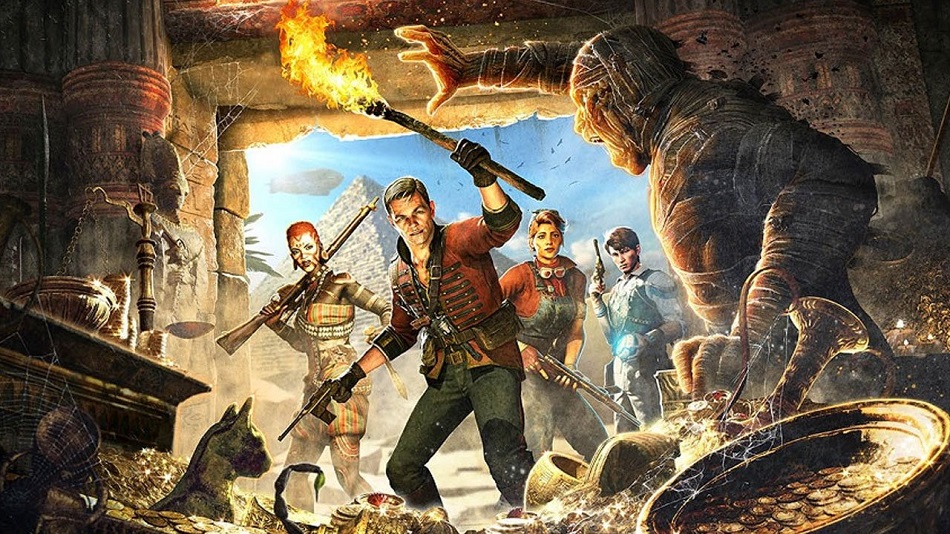 HIGH Using the energy lasso power to disintegrate a crowd of zombies in seconds.

LOW The fleeing relic carriers are far too easy to miss.

All of their guns are golden. I think it’s important to note that right off the top.

Other games may ask players to grind, ‘prestige’ or pay real money for golden weaponry, but Strange Brigade just throws it at the player. Every character’s starting gun is gold, engraved, and covered in custom detailing. It’s not a random thing, it’s not something the developers did on a whim – it’s a mission statement, because SB is a game devoted to excess.

A third-person shooter set in an apocryphal time between the two world wars, Strange Brigade lets players pick from four stalwart adventurers and sets them on a quest to stop an evil Egyptian goddess from conquering the world. How can they save the day? By shooting zombies. Hundreds and thousands of zombies. 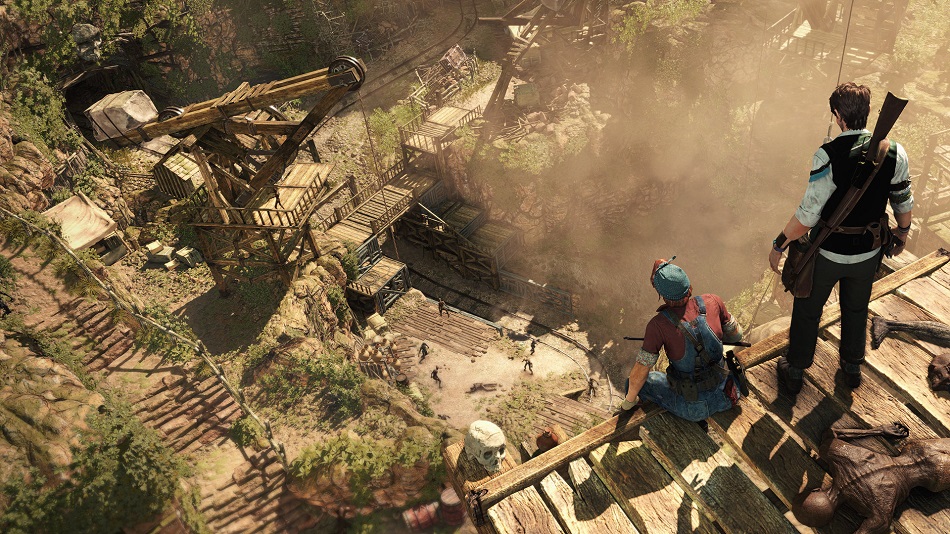 As a spiritual follow-up to Rebellion’s Nazi Zombie Army, Strange Brigade offers the same kind of co-op thrills that series specialized in, now expanded to an impressive degree. Where NZA was beholden to Sniper Elite‘s mechanics whether or not they made sense, SB has been built from the ground up to give up to four players the best possible ride as they shatter long-dead walking corpses.

In addition to a wide array of firearms and grenades, each character comes with a special perk such as unlocking secret doors or gaining health with every kill. They also each have a super attack that’s powered by collecting the souls of defeated foes. The choice of character is more than aesthetic here, as the various skills suit different playstyles that can work well in combination with one another. One character might be able to lure a mob of zombies around a decoy, while another leaps in with an explosive power dive to wipe them out in a single strike. The devs have managed a perfect balance here — all of the characters are perfectly playable solo, but have clear roles to fill in multiplayer.

The levels are built around facilitating fast and brutal combat thanks to corridors packed with zombies and infested arenas with clear sightlines and player-activated traps. Combat is frantic, with SB constantly surprising players for almost its entire length — there are eight standard levels and one abbreviated final boss level, and every one introduces at least two new enemy types that complicate things.

While the game can easily be played via nonstop combat, each level is also littered with hidden rooms and puzzle doors. A few of these are mandatory – energy beam puzzles or lights that have to be shot in a certain order – but the vast majority are optional. It’s here that the developers truly make the game feel as accessible to single players as it is to groups – something NZA never managed.

When played solo, these side objectives completely change the pace by encouraging full exploration of the stunning levels, each one littered with clever detail work and gorgeous vistas. To keep from feeling repetitive, games need to constantly change either mechanics or environments, and Strange Brigade goes hard for the second option. Every level follows a simple ‘kill plenty of enemies on the way to the boss fight’ structure, but each location is vastly different than the last. Moving from day to night, and from claustrophobic tunnels to wide-open plazas, every area offers a distinct architectural style and a twist on pathfinding, ensuring that the player never gets hit with a sense of deja vu.

Strange Brigade is the rare title that manages to construct completely satisfying single- and multiplayer experiences in the exact same space. It’s not a huge project — a motivated team could blast through in under five hours while digging up all of the secrets might take closer to twenty — but it’s immensely replayable thanks to character variety and the different dynamics of co-op and solo modes. With each new Sniper Elite game being markedly better than the last and Battlezone being a standout achievement in VR tank simulation, I feel like I say this at least once a year, but it’s always true — Rebellion has done it again! Rating: 9 out of 10

Parents: According to the ESRB, this game is rated T and contains Animated Blood, and Violence. This game is weirdly safe for an ultra-violent romp. There’s no vulgarity, and the violence is almost entirely bloodless since players are battling reanimated corpses. A few giant scorpions bleed, but that’s it.

Deaf & Hard of Hearing Gamers: I played a good amount of the game without audio and had almost no problems. The developers have come up with a clever way for the Deaf to know if they’re about to be attacked by offscreen enemies – spectral hands appear at the edges of the screen to alert players. It’s creepy and helpful at the same time! Now, the problems. There are enemies that carry valuable relics and cat statues that can be shot for cash rewards. Both make their presence known only by sound effects. While it’s possible to stumble onto them without hearing the telltale jingling or meows, it’s far more difficult than if the developers had added a ‘meowing’ and ‘jingling’ visual cue when they appear. All dialogue is subtitled, though. (Yep, they’re there… Look closely below. The subs are tiny!!) 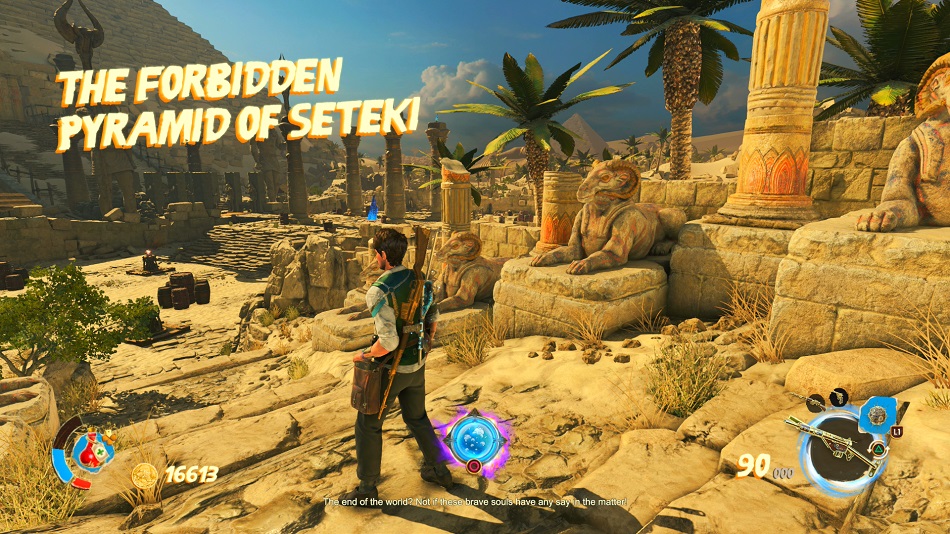 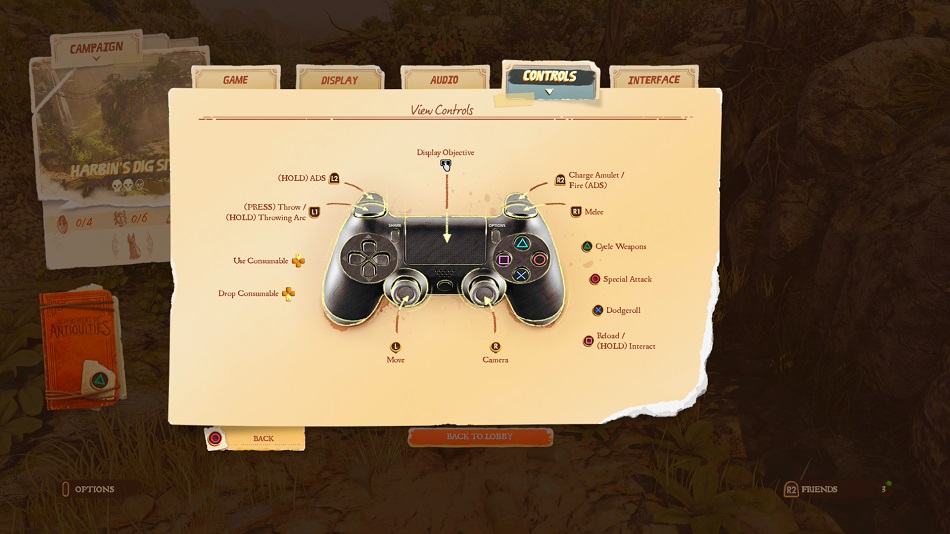