Real World of the Dead 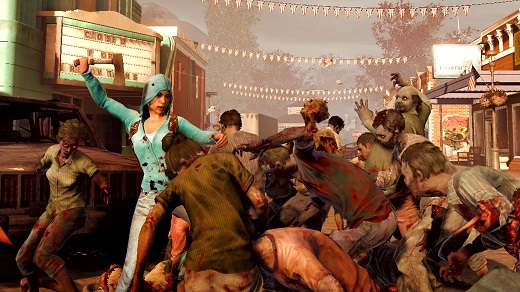 HIGH Watching zombies congregate around a beacon that's leading a missile right to them.

LOW Seeing my truck go flying because the physics engine decided the zombies I was plowing through were made of iron and anchored in concrete.

WTF To unlock a character, I have to make another character gravely ill and then execute them?

The original State of Decay on Xbox 360 and PC was a good game which improved notably with each new update. Its first add-on, Breakdown, ramped up the difficulty level and challenged players to survive the endless spread of the living dead. The final addition, Lifeline, radically changed the focus of play while keeping the systems of gathering resources and building bases as the backdrop for a desperate rescue mission.

State of Decay: Year One Survival Edition for the Xbox One faithfully presents all of these modes with just enough new content to keep this from feeling like a simple re-release, and gives players the total package for easy consumption.

Even though this is my third trip back to State of Decay's Trumbull Valley, I remain impressed by what an achievement the world is. So often games are built using railroad-playset versions of cities—they look real enough at first glance, but can be walked through in a matter of minutes. However, the work of Undead Labs never feels like an arbitrarily scaled-down facade.

As the land transforms gradually from a deep, thick forest to wide amber fields, and then to a small town area, every part of the world is authentic and logically-placed. Nearly every building is a fully-decorated location and not just an interesting backdrop, creating one of the most realistic-seeming video game locations ever.

Speaking of realism, State of Decay offers players the opportunity to roleplay survival after the zombpocalypse, and it accomplishes this better than any other game by letting players use their own common sense when trying to build a post-zombie society. Surviving is primarily a matter of securing resources, and those resources are found in completely logical locations. Need food? Loot someone's kitchen. Medicine's probably squirreled away in the bathroom, and construction supplies are commonly in the shed out back. Rather than forcing players to learn its own arbitrary logic, State of Decay's world is close enough to ours that real-world instincts are often just as valuable as the help windows that pop up.

While these qualities were present in the previous releases, the biggest new feature in Year One Survival Edition is the adorably-named 'Letters From CLEO'—a series of side-mission supply drops that appear every hour or two, offering resources and a couple of high-tech weapons each time. The loud beacon announcing the drops has the bad habit of attracting zombies from far and wide, which means a nasty fight is guaranteed.

These drops are a nice bonus, but as the only significantly new content in the game, I was a little disappointed to find that they don't offer as much storytelling as they could. For example, Lifeline does a good job at hinting at the condition of the outside world as well as the possible causes of the zombpocalypse, but those narrative threads aren't picked up or fleshed out in this new edition. Similarly, no-one has any idea who or what CLEO is, which means players can read these new supply drops as either an intriguing avenue to be explored in the next game, or a 'thank you' from developers happy that people have bought their game again. Obviously one of these options is more narratively intriguing than the other.

Regarding to the technical side of the game, I'm sad to see that it remains something of a mixed bag.

On the plus side, the move to Xbox One has improved the resolution, offering crisper zombies and gore splatters. The framerate's also massively better, and it's now possible to fight hordes of zombies without a single stutter. This step up doesn't extend to vehicles, however—the world still suffers from serious pop-in if cars or trucks are driven any faster than a decent running speed. It was no surprise that the 360 struggled to render Trumbull while traveling on wheels, but it's disappointing to see that the Xbox One hasn't fixed these problems, suggesting it's more an issue with the engine than the hardware it's being run on.

While most of the AI problems have been fixed, there's still the occasional bit of odd behavior to contend with. Sometimes zombies get stuck in walls, occasionally they run straight through closed doors, and in the game's most reliably frustrating bug, they have a terrible habit of not triggering during the base defenses in Lifeline mode. It's bad enough that I have to desperately hold my own against wave after wave of the ravening dead… being expected to leave my base and remind zombies to load so that I can kill them and end the mission is adding insult to injury.

Despite the fact that it still needs some polish, State of Decay remains the gold standard in the zombie survival genre. Putting all this content on the Xbox One is a laudable move, and I recommend it just as strongly now as I did when I was playing it on the 360 and PC. It is by no means a flawless experience, but I'm inclined to cut the developers a lot of slack based on how difficult it must have been to create a world as whole and detailed as this one is. Undead Labs understood that in order to create the truest-feeling zombie survival game, they had to make a world that was completely believable. They managed it, and the result remains a triumph. Rating: 8.5 out of 10


Disclosures: This game was obtained via publisher and reviewed on the Xbox One. Approximately 50 hours of play were devoted to single-player modes and the game was completed.

Parents: According to the ESRB, this game contains intense violence, blood and gore, drug reference, strong language. Please keep your children away from this game. There's drinking and swearing and Molotov cocktails and people being torn to pieces by the shambling dead. While there's no sex or drug use actually present in the game, the characters talk about those things enough that you should consider this thing serious about its M rating.

Deaf & Hard of Hearing: You should have no real trouble with the game. Everything is subtitled, and there's a handy minimap to let you know when aggressive zombies are headed your way. The only real trouble you'll get into is missing out of the distinctive cries of a couple of the super-zombies make once they've spotted you. But that's only a minor disadvantage, since they do show up on your mini-map soon after. All dialogue is subtitled.