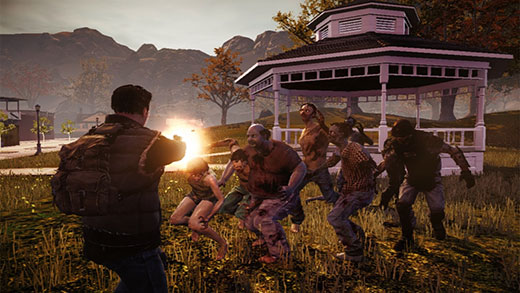 HIGH The desperate thrill of running out of bullets and finishing off a zombie horde with a wrench.

LOW All of my hard-gathered resources disappearing because the game was broken for a week.

WTF Ah, a dynamite suicide vest. That'll teach those zombies for tearing my guts out!

for its bugginess and a couple of poor design decisions, while making it clear that everyone who cares about zombie or survival games had to at least try it out. I can't argue with his assessment. The tension permadeath adds to even the simplest encounter is unparalleled, and the living world the game creates is unique and thrilling in ways that other zombie games can only dream of—even the simplest errand can escalate without warning into a full-on siege of undead.

Breakdown, the new State of Decay expansion, wants to make that feeling last forever by stripping away the plot and creating a new 'endless' mode where the zombies never stop their onslaught, and players can never escape the horror. However, before getting into Breakdown, I'm sorry to report that even six months later and played on a new platform, State of Decay is still buggy.

The PC allows for higher framerates and better graphics, so I never had to deal with the choppiness Brad encountered, but there are plenty of other glitches left in the code. Zombies occasionally teleport through walls, and missions break and can't be completed—at one point the entire game would crash every time I tried to play Breakdown. After a week I tried loading a regular game, and it worked fine. Even the amost-fatally terrible design decision that Brad mentioned—the game draining resources when it's not being played—hasn't been corrected.

Despite these problems, the core gameplay of State of Decay is still incredibly addictive.

Scavenging a neighbourhood house-by-house and trying to keep quiet as zombies shamble by is an experience that feels so intensely right for the genre that I never found myself tiring of it. Even without the plot and characters of the main game providing an obvious framework, I found the experience of gathering survivors and building a community compelling in and of itself.

The developers have even added a 'challenge' system to the game, asking players to accomplish things like killing a set number of zombies with headshots (or car doors, or firebombs…) and then rewards success by giving access to a new 'hero'; a special survivor with excellent skills or equipment, who'll both show up in the current game and be selectable as the starting character next time around.

While the gameplay is still amazing, Breakdown's open-ended structure does create one problem – a severe lack of focus.

This add-on's premise is that players can find and repair an RV they can use to escape to another valley, should resources run short in the current one. The catch is that the new valley, while taking place on an identical map, will have a greater number of vicious zombies to deal with. This is nice in concept, but on a fundamental level 'bug out when things get bad' doesn't feel like a satisfying goal, and without a better goal in mind, the game can start to feel aimless. It's made worse because the RV can easily be fixed in the first half-hour of a session, ensuring that players will then spend the next ten hours being reminded by the NPCs  that 'hey, whenever you want to leave, it's fine by us'. Being told that I can end the game at any time didn't do a great job of making me want to keep playing.

The developers try to create motivation by offering leaderboards that score performance in each valley, and by making certain characters only unlock on higher difficulties, but those are too external to the experience to keep anyone but the most die-hard player going. Creating a more concrete goal would help immeasurably in this respect. For example, what if players could create a stable, self-sufficient community and clean out the valley, essentially 'winning' the game? Then a handful of the best survivors could be dispatched to the next town over, hoping to tame it while going up against much harsher opposition? Really, any kind of an end point would go a long way towards making Breakdown more satisfying.

Despite all the main game's bugginess and Breakdown's motivational problems, State of Decay

has perfectly captured the feel of the best zombie fiction. Up against a tide of entropy, players can gather and fight and build, but it won't last forever, and the zombies are going to win eventually. When it clicks, State of Decay embraces that terrifying inevitability and makes fighting against it feel not just satisfying, but almost noble. Rating: 8 out of 10


Disclosures: This game was obtained via publisher and reviewed on the PC. Approximately 20 hours of play was devoted to single-player modes (completed 2 times).