Taking the Fight to 'Em 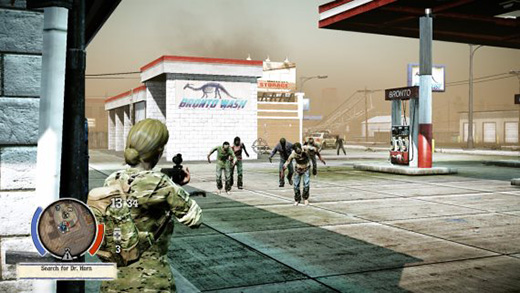 LOW Having no idea where my molotov is going to land after I've thrown it.

WTF No, be my guest and charge that juggernaut, Mr. Injured Accountant Armed With A Letter Opener.

Undead Labs is getting there, albeit slowly.

. This add-on moves the action to an all-new, smaller map, and trades the original formula of rambling exploration and world-building for focused objectives and tight timelines.

Instead of random survivors, the player is now in control of a team of soldiers overwhelmed with cries for help from all around the city. With the threat of zombie sieges always looming, players are forced to make hard choices—extract mission-vital personnel, rescue stranded civilians, or gather the resources that make basic survival possible? The main struggle in Lifeline isn't against zombies, but the clock.

Lifeline does a fantastic job of ramping up tension gradually. As the game begins players have access to loads of military hardware like airstrikes, drone recon, vehicles and weapon drops. The game gives players a taste of what it feels like to be in charge of an effective fighting force, and for the first hour or so, creates the illusion that it may actually be possible to finally beat the dead. Then things go horribly wrong and the soldiers find themselves cut off, scrambling against chaos, and scrounging for every possible advantage.

There's a solid story woven through the plot-centric missions. As they scour the city for doctors, scientists and related personnel, the player will get hints about the world's backstory, including tantalizing ideas about just what may have caused the zombpocalypse in the first place. No questions are definitively answered, but Lifeline seems to offer an assurance—especially in a series of sub-missions concerning zombie biology—that all of this is going somewhere, and that Undead Labs is interested in building something bigger than a generic survival narrative.

If the well-designed plot wasn't enough to recommend the game, the developers have fixed one of the biggest problems in the original title. Despite the enormous size of the map in State of Decay, players were constantly being told not to use cars, lest they attract the attention of the dead. Approximately no players heeded this advice, which led to a huge gameplay dissonance—if I'm driving a pickup truck everywhere, why can't I load extra supplies into it?

With Lifeline, Undead Labs has finally altered the game so that the mechanics reflect how people wanted to play, as opposed to how they intended people to play it. Duffels can now be loaded into cars, giving supply runs the potential to be five times as effective as they were in the past. This isn't just in Lifeline, either—State of Decay and the Breakdown DLC have also been patched, meaning that Lifeline has actually made going back and replaying the earlier versions a more attractive prospect.

Not all of the game's problems have been fixed, however. The framerate remains inexcusably choppy whenever there are more than a few zombies onscreen at once. Cars will still roll with the least provocation. Grenades remain completely impossible to aim, and it's now an even bigger problem since thrown flares are used to target airstrikes. The biggest issue, however, is that friendly NPCs still can't be given orders, and this DLC is all about rescuing them. I know they mean well, but when I have a group of three heavily-armed soldiers trying to deal with an infested house, what do a couple of researchers think they're going to accomplish by charging in with wrenches? A 'stay in the car until it's safe' button would go a long way towards making the game more playable.

Now in its third iteration, State of Decay

is demonstrating a steady improvement that would be the envy of most titles. Each new add-on has made the game's world more interesting and added fascinating gameplay developments. There are still bugs and difficulties, but the developers have demonstrated a passion for both repairing their mistakes and coming up with innovative new twists on their survival horror concept. Lifeline is their best experiment yet, and I'm interested to see what they come up with next. Rating: 8.5 out of 10


Disclosures: This game was obtained via publisher and reviewed on the PC. Approximately 12 hours of play was devoted to single-player modes (completed 1 time). There are no multiplayer modes.