Endless Armies Of The Dead 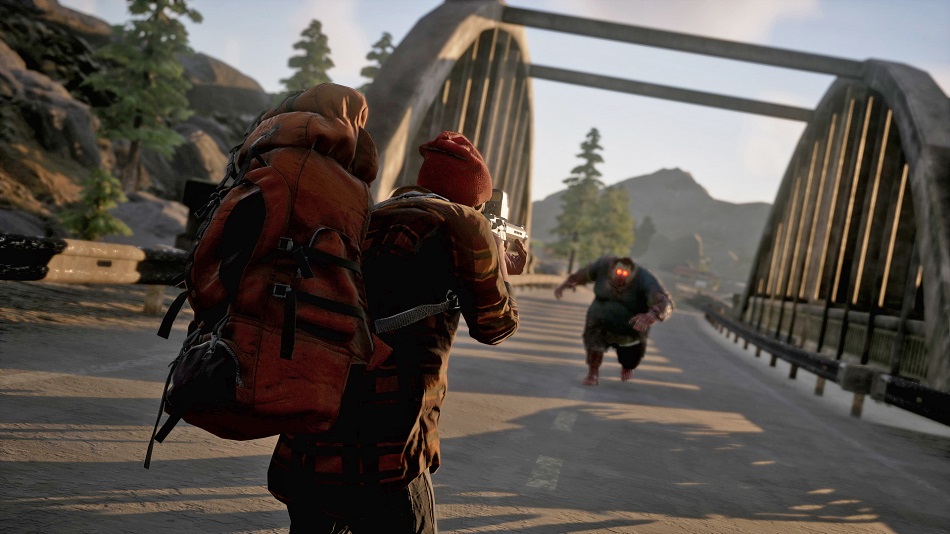 LOW Driving across the map because the game can’t adjust objectives to my base’s location.

WTF Why no update on CLEO, Undead Labs?

There was DLC for the original State of Decay called ‘Breakdown‘ that stripped storytelling out and dropped players into its zombie-filled sandbox. The goal was to build a community until it was strong enough to defend itself, then pick a sufficiently leveled-up character and head to the next valley (basically resetting the map) to start all over again. This mode was satisfying because SoD‘s kill/loot/build loop was solid, and it was packed with challenges that unlocked heroes with unique weapons and special abilities.

Breakdown‘s main drawback was the complete abandonment of narrative, which had actually been one of State of Decay‘s strengths — the campaign offered a well-told tale of zombie survival that kept me playing despite all the technical bugs and inexplicable crashes.

Why is it important to explain the Breakdown DLC before discussing State of Decay 2? Because it’s actually Breakdown 2.

As with its predecessor, SoD2 is a third-person realtime game that drops players into a huge map with static locations offering randomized loot and NPCs. They’ll have to secure a homestead, scavenge materials to fortify it, and then recruit more survivors and keep upgrading until they’re strong enough to leave. Once accomplished, all that’s left is start the whole thing over. Luckily, there are three different maps to choose from this time, giving players strong incentive to restart in a new location.

Apart from the variety in maps, several steps have been taken to ensure that this is a more robust experience than Breakdown was. Most notable are the “hero” and “leader” systems. 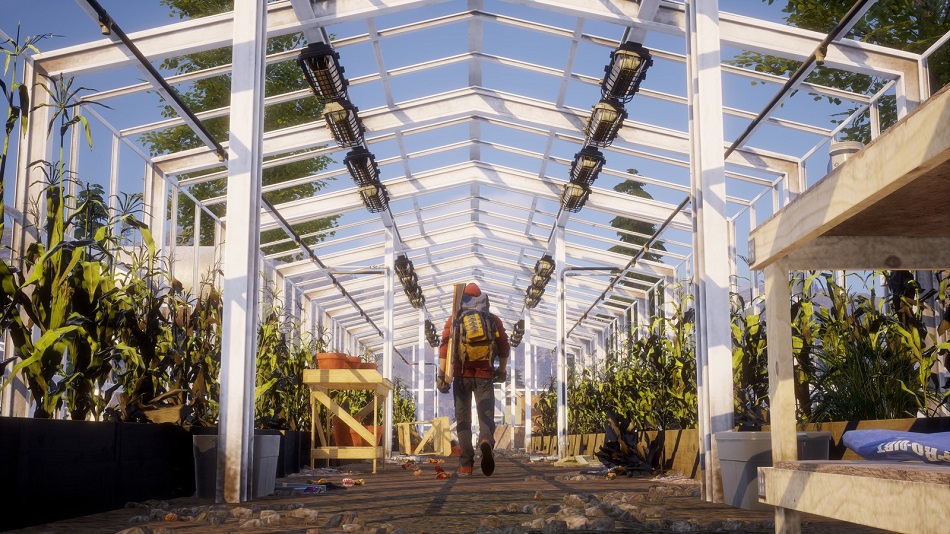 As characters go on missions to kill zombies and complete objectives, they’ll increase in value to the community until they become “heroes” who provide experience and training bonuses to the rest of the group. One can even be promoted to “leader”, which opens up one (of four) mission chains based on what type of leader they’re destined to become – a Sheriff, Builder, Trader, or Warlord.

The different ending tracks are good additions because once they’ve been completed, the player’s next community starts with a themed perk. I beat the game as a Builder, and my subsequent attempt started with free water and power to all homesteads — it was a gigantic advantage, and I can only imagine the other bonuses are similarly useful. Unfortunately, despite the boosts they give, they don’t make up for the lack of narrative because the missions don’t differ much from standard assignments players will be doing anyway – clear this infestation, grab those materials. There also aren’t many. In my two trips through SoD2, I saw plenty of repeated events.

SoD2‘s radio broadcasts hint at a bigger world — government-aligned mercenaries attempting to secure the nation, conspiracy theorists desperate to figure out where the zombies are coming from, and even a cameo appearance by Lifeline‘s most memorable character. Perhaps the devs are planning narrative DLC, but right now, these glimpses make the complete lack of storytelling seem even more egregious. Nowhere is this worse than the initial character selection – the player has to choose between siblings, best friends, lovers who met during the zombpocalypse, or a long-time couple whose relationship was on the rocks before the world went to hell. I eagerly anticipated how these storylines would play out, and I’d assumed that each pair would react to events differently, giving a reason to try different teams during a second playthrough.

Sadly, this wasn’t the case. Once the prologue ended, no matter who I chose, my characters were just two random members of the community. I found no exclusive dialogue referencing their relationship, no missions that could only be completed by the two of them, no reason to look at them as anything but two generic members of the roster. It’s an obvious missed opportunity.

Combat is just as serviceable as ever. Zombies are easy to defeat on their own, but formidable in swarms – and not just because too many cause the framerate to go to hell. A key improvement this time is that partner AI has gotten a lot better at looking out for itself. They’ll match the player’s actions fairly well, and won’t run into combat unless they’re attacked or the player initiates. Of course, it’s even better with actual co-op. Players with Xbox Live Gold can go online and visit their friend’s communities to trade and help out with quests. There’s even a Monster Hunter World-style S.O.S. function that allows players to put out a call for any random person to drop in and help with a tough mission or formidable nest of zombies. 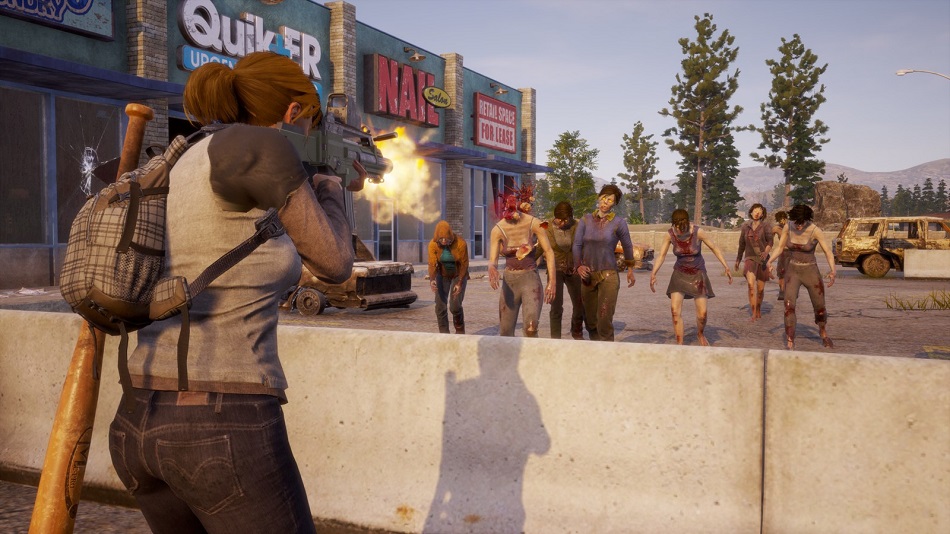 Speaking of zombies, there aren’t any major new threats this time – just plague zombies that can infect characters, making them require immediate medical attention. There are also plague hearts, which are zombie nests that have to be destroyed before the community can be completed. These are decent additions, but nothing that changes the way SoD2 is played, and the suggestion that the zombies possess some kind of hive intelligence raises far more questions than the devs have any interest in answering.

Technically, SoD2 is as rough as the first State of Decay. Sometimes cars that tap world geometry will inexplicably explode into flame and go flying through the air. The framerate is shockingly bad in major zombie encounters. The engine can’t make walls disappear, so players will find keeping track of their surroundings in small interiors nearly impossible.

Worst of all is the way SoD2 handles refueling vehicles. Driving around the map is an absolute necessity – not just because of the protection cars offer from zombies, but storing things in a trunk for transport is vital. The problem is that all of the vehicles have incredibly bad mileage and run out of gas after about ten minutes of driving – less time than it takes to get from one end of the map to the other and back. Bad driving conditions and zombie attacks already force players to spend plenty of resources maintaining vehicles, so adding tight fuel restrictions is adding insult to injury, in addition to being utterly unrealistic. What car can only travel five miles on a full tank of gas?

State of Decay was the high-water mark for open-world zombie survival, and while State of Decay 2 doesn’t top it thanks to the complete lack of storytelling, it’s a suitable upgrade. The hero system and three maps add replayability to the game, and Undead Labs’ history with the franchise suggests that they’ll get around to fixing many of these problems later. That said, it took them two years and a new platform to finally iron out the first State of Decay — let’s hope this one has a quicker turnaround time. Rating: 6.5 out of 10

Parents: According to the ESRB, this game is rated M and contains Blood snd Gore, Drug References, Intense Violence, and Strong Language. The game features non-stop blood and gore, the end of the world, and humans killing each other as well as zombies — it’s a bleak mess. Also, people discuss using alcohol and drugs fairly extensively, and there’s constant use of profanity. No kids allowed.

Deaf & Hard of Hearing Gamers: While the game has subtitles, there are many audio cues with no visual counterparts. Being able to hear zombies nearby is of the utmost importance, especially because only activated and attacking zombies show up on the game’s mini-map. Also, if players are being shot from off-screen there’s no indicator to let them know about attack direction, so it’s possible to start losing health and have no idea why it’s happening. This game is not fully accessible and please note that subtitle font and size cannot be changed. 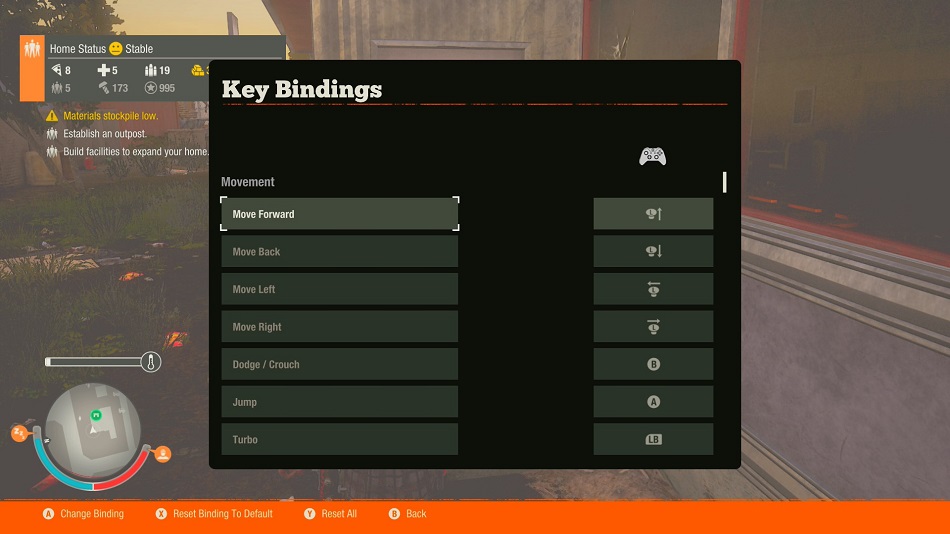 Remappable Controls: This game’s controls are fully remappable – players can assign whichever button they like to whichever action they prefer, across every context, and even make the game playable with a single thumbstick and automatic camera if they prefer!

Is it wrong that I miss boarding up broken windows in my base? Great game, though.