All Hands On Deck! 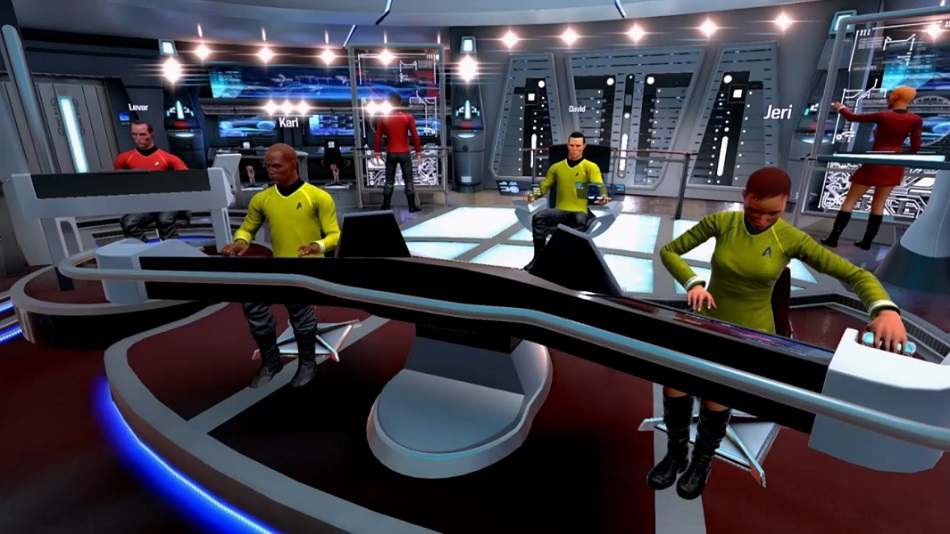 HIGH Punching it into warp as a fleet of Klingons closed in.

LOW Playing with a helmsman who couldn’t find the heading numbers.

WTF Getting a look at the tactical console on the original Enterprise. How did Chekhov manage it?

While it’s possible to play Star Trek: Bridge Crew solo, there’s no point in it. Yes, the AI players are broadly competent, and a single player can jump into any role at a moment’s notice to perform the fine tasks that need a human hand, but that’s not what the game is. No, Bridge Crew is about communication and coordination between four players –about building trust and transforming a group of people into more than the sum of their parts. This is a purely co-op experience, and it’s one of the best I’ve encountered.

Star Trek: Bridge Crew puts players in control of the USS Aegis, a high-tech experimental starship tasked with searching a remote area of space for a possible new Vulcan homeworld. Naturally, Klingons have already established a presence in the sector, which is going to turn the survey mission into something considerably more exciting.

Players take on one of four roles on the starship’s bridge – Helm, Tactical, Bridge, and, of course, Captain. Each one is vitally important in its own right, and all are incredibly engaging to play. The helm controls the speed and direction of the starship in three dimensions, using a steady hand to maneuver through asteroid fields and keeping enemies within firing range. The tactical officer scans ships and fires weapons, either blasting away at their shields and hull to destroy them, or surgically crippling ships’ systems to remove them as a threat.

Engineering manages the ship’s power output, which doesn’t seem like it would be such an important role, but the developers have put an intensive focus on stealth in Bridge Crew, and it’s entirely up to the engineer to make sure the ship isn’t detected at an inopportune moment. As for the Captain, they have the most important job of all – while it may not seem as immediately satisfying as the other roles thanks to a lack of shooting and steering – the captain provides vital context for the rest of the crew’s actions. Only the captain can access mission information and map screens, and only by relaying the information on them and making quick decisions about which tasks to prioritize can the crew have a chance of succeeding. 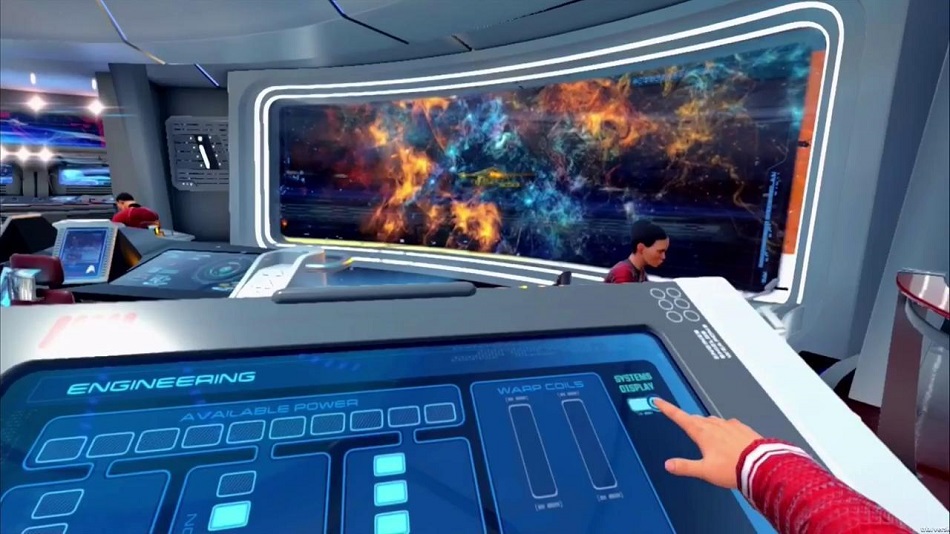 Every station has completely intuitive controls. Players can operate them with either their Dualshock or Move controllers, and it’s a simple matter to hit buttons and move sliders that activate a console’s functions. Everything is built around touchscreen interfaces that players will tap to set speed, allocate power, or target enemies. The developers have managed to capture the look and feel of the 2009 Star Trek starships, and everything is screen-accurate to a fault. There are quick tutorials designed to get players up to speed on the controls, but everything is designed to be almost idiot-proof, ensuring that players are never confused about which button does what in the heat of battle.

The game’s campaign is made up of just a handful of missions, which each take around half an hour to complete. They all have multiple objectives (often focusing on stealth) as the crew of the Aegis must avoid an overwhelming Klingon force. The stealth sections are designed to truly get the team working together – the captain has access to a readout of the ship’s power signature, which is depicted as a ring on the map. Should any enemy ships enter the ring, they’ll detect the Aegis. It’s up to the captain to direct the helm to carefully avoid enemy patrol routes while the engineer keeps the power at minimum levels and the tactical officer does the scanning and teleporting that completes objectives. This decision to build the game around careful, stealth-based gameplay makes the whole thing feel a lot like a submarine simulator, and an unusually tense one at that.

While the campaign is fairly limited and can be beaten in a single session, the developers have included a random mission generator to encourage replayability. The game will draw objectives, threats, and locations from a pool, then let the crew get right into the action. It doesn’t say great things for the game’s main campaign missions that the randomly generated ones are nearly as in-depth and satisfying to play, but they really are good enough to justify repeated trips back into the world of Bridge Crew.

There’s also a truly challenging hard mode offered in the form of the Orignal Series Enterprise bridge. Superfans (or those looking for a deeply frustrating hour or two) can put themselves inside a gorgeous recreation of the classic Enterprise, offering a complete lack of holographic displays, touchscreen interfaces, or any useful visual cues. Seriously, every control station is just an array of switches and colored buttons. Players are free to bring up a cheat-sheet, of course, but that doesn’t make the experience any less daunting.

Star Trek: Bridge Crew accomplishes what no previous game came close to — it truly makes the player feel as if they’re on the bridge of a starship, taking part in sci-fi adventures. When a skilled crew is working under an able captain, Bridge Crew offers a uniquely thrilling experience, making everyone feel that they’re contributing equally to every part of the mission. There are plenty of co-op games out there, but I’ve never encountered one as purely collaborative as this. This isn’t about characters with different skillsets making up for each others’ shortcomings, this is about transforming four people into cogs in a machine designed to do incredible things. Rating: 8 out of 10

Disclosures: This game is developed and published by Ubisoft. It is currently available on PSVR, Oculus, and Vive. This copy of the game was obtained via publisher and reviewed on the PS4. Approximately 1 hours of play were devoted to the single-player mode, and 10 hours to multiplayer modes. The game was completed.

Parents: According to the ESRB, this game is rated E10+ and contains fantasy violence. This couldn’t be safer. No blood or gore, swearing, really any objectionable content. The scariest thing about the game is the possibility that – should the Aegis take enough damage – one of the NPCs wandering around the bridge will be killed. If your children are old enough to wear VR headsets, they can play the game.

Deaf & Hard of Hearing Gamers: It’s a game built entirely around audio communication with other crew members. Without audio, it’s unplayable in anything other than the mediocre single-player mode. This game is not accessible.