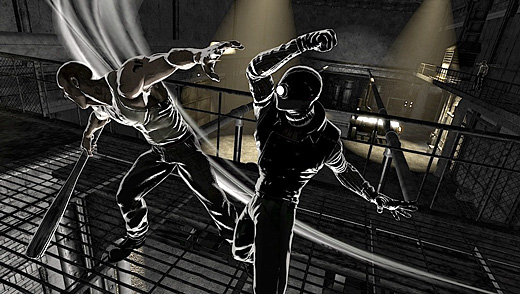 HIGH Dragging a gunsel into the shadows and webbing them to a wall in a single, effortless motion.

LOW Being unable to tell an enemy from a wall in 2099.

It's an inventive solution, to say the least. When attempting to adapt a long-running and varied a property like Spider-Man, how does the corporation exploiting that property decide on which version of the web-slinger to feature? While indecisiveness isn't traditionally considered a virtue in video game design, developer Beenox has generated interesting returns by offering players a taste of four different games that they could have made. But are all of those games worth playing? Or even different enough to warrant the separation?

flies in the face of Spider-Man gameplay conventions by eschewing the "open-world" concept of recent Spidey titles and instead putting the player in contained locations for a more episodic structure in which to punch villains and climb up walls.

The story does an excellent job of providing a sensible framework for the incredibly random choice of enemies and locations. Mysterio tries to steal a tablet promising him godly powers, and while fighting Spider-Man the magic stone explodes, sending pieces throughout the multiverse, forcing the Spider-Men of the varied realities to play clean-up—a situation made more difficult by the fact that, in a coincidence so startling that it defies all odds, every single fragment happened to be picked up by a famous Spider-Man villain.

The developers have done a great job of making Spider-Man's controls feel intuitive and facile. It's simple enough to move quickly around the environment, although nearly no swinging is required, which is profoundly odd for a Spider-Man title. The aforementioned contained levels don't afford much space for Spidey to pick up speed, and most of the time players will just get around by "Web-Zipping" to various ledges and posts, much like using Batman's grappling gun from Arkham Asylum (a coincidence that's far from accidental).

The combat system is overstuffed with options, but an extended series of tutorials and a bonus point structure that rewards players for experimenting with different play styles and attempting more challenging feats combine to get players up to speed quickly. The fighting and moving mechanics are certainly solid—it's a pity that I can't say the same for the premise. The multi-verse approach isn't a bad idea, but other than providing fan-service to True Believers the game doesn't make a strong case for three of its four game modes. 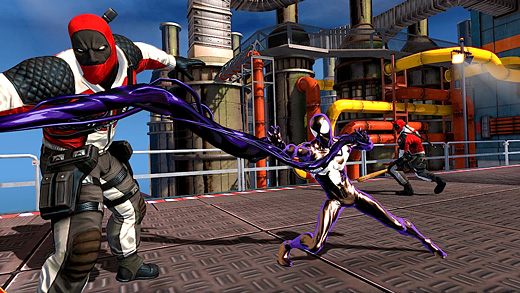 The Amazing and Ultimate modes are, for all intents and purposes, the same mode. The main difference between them is that Ultimate's graphics are marginally more cell-shaded than Amazing's. The real difference is supposedly that Spider-Man is wearing the Venom suit in one mode and his regular suit in the other—but that's just a visual effect. From a gameplay standpoint, grabbing enemies with a pseudopod as opposed to a clump of sticky chemicals is negligible.

The third world, "2099", is kind of a magnificent disaster. The gameplay is largely identical to the Amazing/Ultimate levels, but the art design is so garish that it actually makes the game considerably harder to play. Depicting the future as a cluttered neon mess works in movies and on the printed page where the viewer/reader is supposed to be overwhelmed by the experience. Navigating a mess of glowing steel in a game is another matter entirely. Everything in the 2099 world is a confusing jumble—enemies blend in with the scenery, while platforms and destinations get lost in the maelstrom. I ended up playing nearly half the level with my "Spider-Vision" (highlighting enemies and locations) turned  on —certainly not the experience the developers were hoping for, I'd imagine.

It's understandable if most readers aren't familiar with this iteration of the wall-crawler. There have only been eight Spider-Man Noir issues over the past three years, and it seems to have been included here solely because it allowed the developers to shamelessly rip-off Arkham Asylum to absolutely fantastic effect.

The Noir levels place the player in eerie, shadow-filled locations, and encourage them to carefully sneak about and pounce on their prey at opportune moments while dodging searchlights and tommygun fire. The Noir levels would stand out simply by virtue of their difference from the rest of the game, but it's their exceptional design that truly makes them notable. Each one of the (only 3!) levels offers a large, open playground that gives players a chance to practice their stealth skills in a wide variety of ways. The sequences are tense and thrilling, and I was always sad to see them end because it meant I was going back to another three levels of undifferentiated brawling and climbing.

If I've implied that most of Spider-Man: Shattered Dimensions

isn't worth the foil it's printed on, I should make it absolutely clear that it isn't the case. It's just that, while most of the game is a well-executed brawler with some light exploration thrown in and some memorably over-the-top boss fights, the Noir sequences shame the rest of the title by providing top-flight stealth levels that are as thrilling to play as they are visually interesting to behold. Shattered Dimension was an interesting experiment, but on the whole I'd have rather just played Spider-Man Noir. Rating: 7.5 out of 10.

Disclosures: This game was obtained via publisher and reviewed on the PS3. Approximately 10 hours of play was devoted to single-player modes (completed 1 time).

Parents: According to the ESRB, this game contains mild language, mild suggestive themes, violence. Parents, be wary. This game may be rated T, but it's a hard T. Not only does it feature constant violence, but there are also a number of disturbing situations, including the mass-slaughter of government agents, who are then transformed into zombies that the player is forced to execute. Hell, one of the villains is even a proud cannibal, who, in flashback, devours Peter's famously-dead Uncle Ben. So yeah, you might want to take a second of consideration before grabbing this for younger teens.

Deaf & Hard of Hearing: Like all too many games, Spider-Man: Shattered Dimensions suffers from an insulting lack of incidental subtitling. So while the plot's cut-scenes will be coherent enough, you'll be missing out on all of Spider-Man's quips while fighting enemies across four dimensions. Given Spidey's reputation as the quippiest superhero, this is something of a startling oversight. On the upside, though, there aren't any vital audio cues whose absence will cripple your enjoyment of the game.

I picked this game up last month, and I actually really enjoyed it. It had something that none of the Spider-man movies (and, honestly, none of the Spider-man games outside of Ultimate Spiderman) had: that light-hearted Spider-man feel complete with humorous Spidey quips. It’s interesting, as we seem to have the same problems with the game: the 2099 world doesn’t really work all that well and isn’t all that much fun and the game in general is pretty repetitive. Nice to see that we have the same love for the style-rich Noir universe, though. To me, it was by far… Read more »