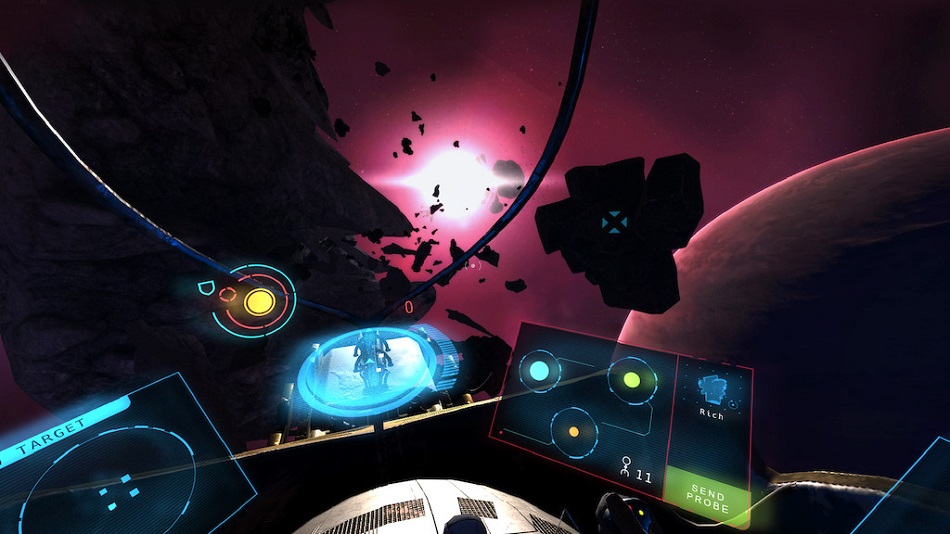 WTF Non-functioning volume sliders? How does that get through testing?

The volume controls don’t work. This may be a weird note to start on, but it’s a baffling oversight.

As I started the game, I was displeased to discover Space Rift‘s audio blaring into my ears. I looked over to my options console — which my spaceship’s onboard computer refused to admit existed, in a cheeky meta moment — and turned down the volume sliders.

This action that had no effect on the volume of the music and speech screaming at me. This didn’t cause any problems in the game since the PSVR has a volume control built into the headphone jack, but it’s puzzling. How does a developer miss something so basic and fundamental?

The same way, I’d imagine, that they left in a pair of game-breaking bugs.

Space Rift is the story of a dystopian future in which megacorporations control Mars with an iron fist. This puts them in a great position because Earth was devastated by a meteor impact, so the red planet is the only viable place for humans to cling to survival.

The main character is a miner who gets caught up with a group of revolutionaries planning to use a device to terraform Mars, putting him into conflict with the aforementioned corporations who prefer the current state of tightly-managed misery.

Most of Space Rift is set inside the cockpit of the main character’s mining ship. It’s a good-looking virtual space, sized correctly for the player sitting in a chair wearing their VR helmet. The cockpit has a few screens that need to be looked at from time to time, and it’s completely natural to glance over to the left or right to start an audio file or begin drilling an asteroid.

The immersion isn’t flawless, though — pressing the X button doesn’t simply activate the touchscreens, but rather causes player’s avatar to reach over and tap them. The rest of the time, his arms lay passively on armrests, holding the ship’s control sticks. Players can pitch, yaw, flip on the afterburner, and even blast AI drones out of the void, but their avatar’s arms won’t move in the slightest. It’s a distraction in what would otherwise be an extremely effective cockpit design.

Strangely, though, the fairly realistic graphical style of the cockpit is completely at odds with the world that players look out on. 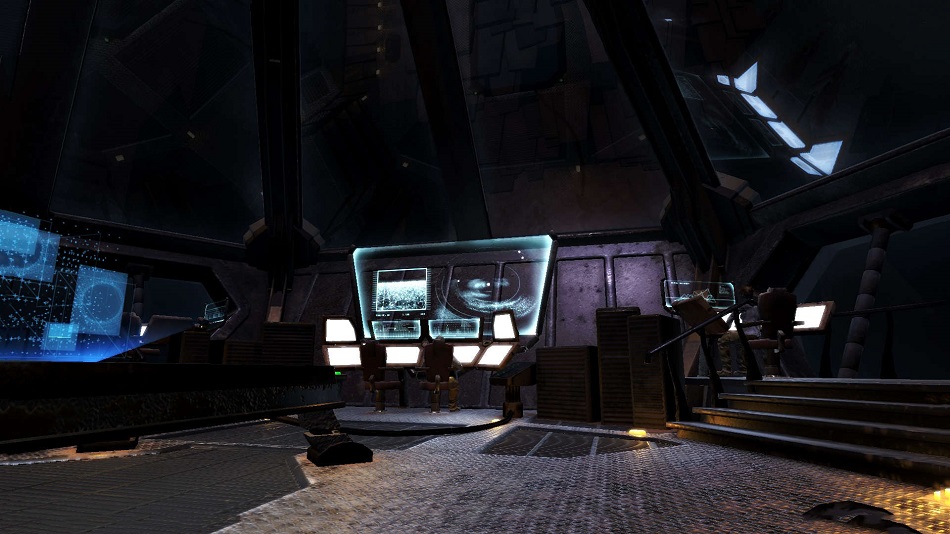 Inside the ship is a modern PSVR title, outside is something more akin to 1994’s TIE Fighter thanks to flat, unskinned polygons arranged to suggest the shapes of spaceships, asteroids, and high-tech facilities. It’s a bizarre clash of visual styles that hurts the game’s effectiveness at world-building. Had the developers simply gone all the way retro with their visuals and given players the chance to explore a late ’90s-style 3D world, I would have appreciated it and defended the choice. Staring out the window at a giant spaceship built of fewer polygons than the window itself is supremely unimpressive.

It’s too bad that the aesthetics don’t wow, because in its short running time, Space Rift offers solid gameplay.

The mining (necessary for upgrading the ship after four of the five missions) takes the form of a timing minigame in which the player has to land a drill on an asteroid and then detonate a mining explosive in a rich area of its core. It’s just involved enough to be interesting, and the game doesn’t ask players to do it enough times in a row that it ever becomes tedious. There’s also a decent amount of variety in the missions, including straight-up mining, dogfighting, scanning tankers and exploring research facilities. I was impressed by the types objectives, although with just five missions to play, I would have been sorely disappointed if the developers had repeated themselves.

This brings me to the game’s big problems, apart from the graphics.

The first are the game-breaking crashes. I’m not sure exactly how I broke the training mission, but halfway through, I found myself too short on resources to complete an objective, forcing me to start the whole thing over.

Then, after completing the training mission and going to my home starbase, I made the mistake of trying to travel back to the staging area from the briefing area. It seems the developers hadn’t allowed for this possibility, and the door to the mission briefing room had disappeared, leaving me with no way to start the next mission. So I restarted the game again.

After those two mishaps, things ran smoothly until the end, where the AI becomes unpredictable and unfair. Obviously the developers tuned everything for space-based combat, so setting the last level within a research facility just confuses the enemy drones. Suddenly their line-of-sight and range becomes impossible to judge, and they develop the ability to shoot right through solid objects. It’s a mess that turned what should have been the last five minutes of the game into a twenty-minute slog of repetitive respawning.

With decent gameplay and mildly intriguing story, I would have given Space Rift a passing grade in the current PSVR lineup. However, the lack of a coherent art style and the disastrous bugs keep me from being able to do that. If and when Chapter 2 is released, I hope the developers manage to buckle down and make sure everything works properly. I don’t hold out much hope, though — I mean, how many games are there where even the end credits are broken? Rating: 3.5 out of 10

Disclosures: This game is developed by Vibrant Core and published by bitcomposer. It is currently available on PSVR. This copy of the game was obtained via publisher and reviewed on the PSVR. Approximately 3 hours of play were devoted to the single-player mode, and the game was completed.  There are no multiplayer modes.

Parents: According to the ESRB, this game is rated E10 and contains fantasy violence, mild language. While there are threats of violence and tales of murder, by and large the player will just be blasting AI drones out of the sky for most of the game. There’s no other objectionable content of note.

Deaf & Hard of Hearing Gamers: There are few audio cues, and none are necessary to playing the game. All key lines of dialogue are subtitled, but a large amount are not.