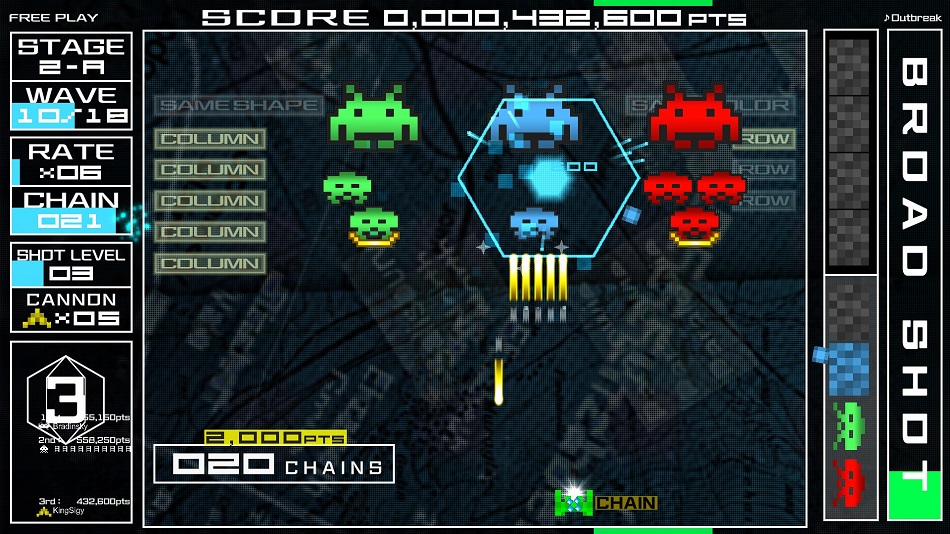 HIGH Unleashing a bonus-mode barrage of spread shots on an unsuspecting armada.

WTF How am I supposed to kill a hundred ships that are smaller than my shots?

Space Invaders has been updated and remastered countless times, with new graphics plastered over its simple visuals and new powers and enemies introduced to spice up the gameplay. In light of all the attempts over the years, it seems like Space Invaders Extreme would have its work cut out for it when planning to bring something new to the table. The developers managed it, however, by leaving the graphics all but untouched to capitalize on the current wave of retro love while thoroughly redesigning the gameplay without stripping it of the classic Space Invaders feeling.

So, how does one remain faithful to the Space Invaders experience? First and foremost, it’s about keeping the player’s craft locked at the bottom of the screen, firing upwards at endless pixelly foes descending in rigid formation. I mention ‘craft’, because visually, the player is controlling a ship in outer space rather than the traditional tank. Also gone are the concrete barriers that can soak up enemy fire – now players will have to dodge all incoming shots, creating play that’s more frantically high-pressure than the franchise is known for.

SIE is all about keeping the player on the offense. While the ship is still armed with a single blaster that can only have one projectile onscreen at a time, it’s rare for the player to be without a bonus special weapon for more than a few seconds. Also, in addition to their varied shapes, alien ships now come in five colors — white, blue, red, green, and grey. While white are the classic ‘generic’ ships, each of the others has an associated power-up. Simply destroy four like-coloured ships in a row, and a capsule drops to unleash exploding shells, rapid-firing spread shots, or a piercing laser that wipes out an entire screen’s worth of enemies in seconds. 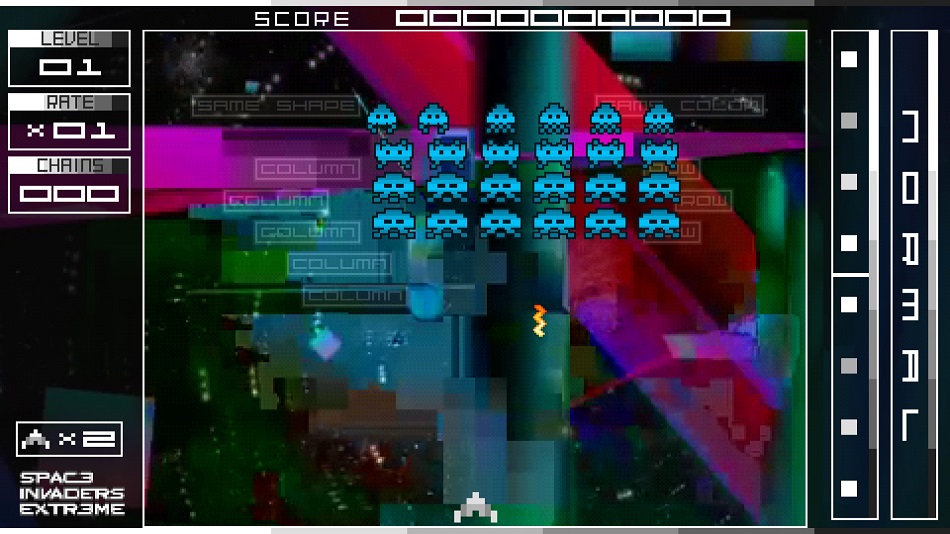 These powerups massively increase the speed of play. Each level offers multiple waves of ships, with a new one appearing the moment the last ship of the current wave is destroyed. Also, high scores aren’t just for bragging rights any more — they’re necessary for getting access to the harder (and higher-scoring) levels. To manage it, players will have to keep combos going for multiple waves while also killing enemies in specific patterns to earn extra lives and larger bonuses.

While the graphics are left primitive intentionally, the devs have found ways to put an effective sheen on the proceedings. There are pixelated particle effects to celebrate enemy deaths, screen-warping color effects whenever the player makes it into bonus mode, and even vast size changes to some of the enemies. Players can also choose the classic pure-black background or mix things up with a writhing visualization that matches the techno soundtrack. I personally found it a little distracting when trying to track dozens of onscreen projectiles, but it accurately captures the look and feel of the arcade experience the game is going for.

Even with all of the bells, whistles, and new gameplay mechanics, Space Invaders Extreme manages to nail the challenge and thrill associated with its ancestor. Blazing speed, an empowered player, and enemies with varied abilities can’t obscure the fact that it’s the classic foundation underneath that makes this game work so well, and SIE proves that it’s still viable today. Rating: 6.5 out of 10

Disclosures: This game is developed by TAITO and published by Degica and TAITO. It is currently available on PC. This copy of the game was obtained via publisher and reviewed on the PC. Approximately 3 hours of play were devoted to the single-player mode, and the game was completed. There are no multiplayer modes.

Parents: According to the ESRB, this game is rated E, because of course it is. This is Space Invaders. There’s no more harmless kind of violence than the alien shooting featured in this game. Let the kids go nuts with it.

Deaf & Hard of Hearing Gamers: The game largely works fine without sound. There are audio cues, but they all have visual accompaniment. It’s fully accessible.