From Beneath Red Sands 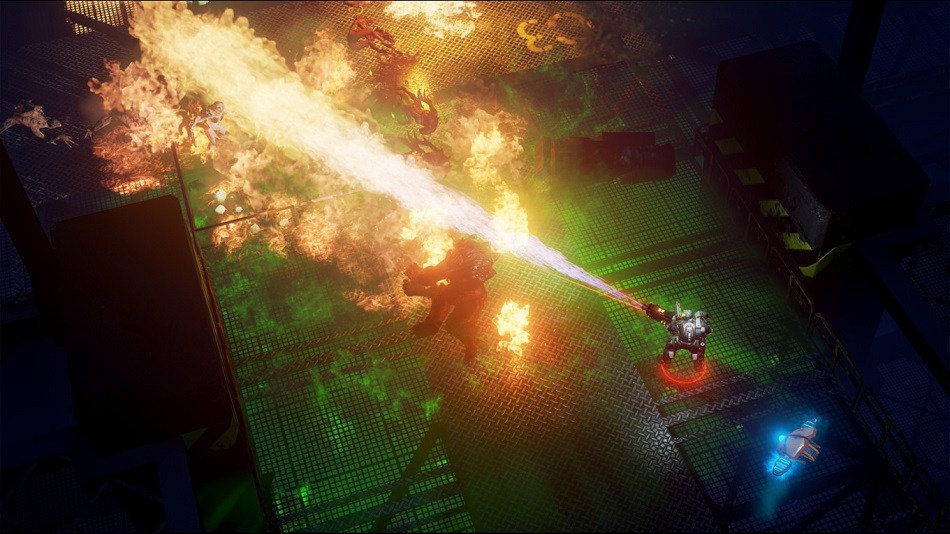 LOW Any of the boss fights.

WTF The mini-nukes are safe to detonate so long as I’m exactly halfway inside the blast radius.

There’s a hard and fast rule when it comes to shooter design, one that developers break at their peril — If there are unlimited enemies, there must be unlimited ammunition.

There are a number of ways to bend this rule. Certain levels can be themed around escape, for example, with the player expected to flee from a neverending horde of foes. Developers can also make enemies constantly drop ammunition, transforming killing and resource gathering into a single activity. A game with infinite enemies and incredibly small amounts of ammo, though… that would be madness, unless a developer was trying to build an entirely new kind of shooter, with a completely original mechanic designed to make this kind of insanity playable.

That’s what Solstice Chronicles: MIA is, of course. It offers a new concept in the world of twin-stick shooters by asking the players to manage their difficulty level like any other resource. That sounds strange and the game doesn’t explain it very well in the four tutorial levels — I was a full third of the way through the campaign before I was truly confident about what I was supposed to be doing. Once I’d wrapped my head around it, however, I was able to appreciate it for what it is – a mechanic that complicates and deepens the twin-stick genre like no other before it.

Players take control of a marine cut off from his unit during a mutant outbreak on Mars. His goal? Partner up with a likable AI drone, figure out where the mutant virus is coming from, and escape with a cure. There are a wide variety of environments, and an RPG-lite system that lets players unlock weapons and powers with skillpoints they earn by beating levels. This is all pretty standard fare, and Solstice MIA‘s writing is good enough to create a sense of building threat and momentum over the course of the story. It also has solid art design. The power-armored marines move with an authentic clunkiness, and the various mutant types, from the lowly facehugger all the way up to giant sandworms, are suitably creepy and disgusting. 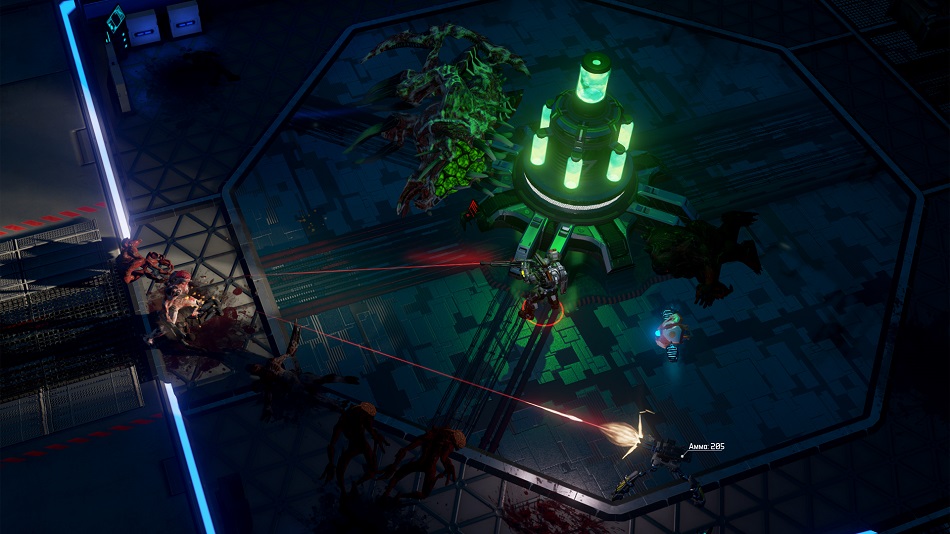 The real star of the show, however, is the ‘Threat’ system that Solstice MIA is built around. At all times the player has an indicator letting them know what the maximum number of enemies that can spawn at the current moment is. As enemies run up and are gunned down, new ones are spawned out of zones marked by green smoke. Making progress through the levels and killing certain foes will raise the maximum spawn limit over and over again until a constant stream of enemies are rushing towards the player. The only way to survive is to learn various systems of threat management.

The player’s drone buddy has four different powers — two that raise the threat level, and two that lower it. When the drone is out digging up more ammo or detonating a micro-nuke, the threat goes up. When it makes a shield or taunts foes, the maximum threat goes down. These powers are notable for how well-balanced they are. An infinitely-recharging screen-clearing bomb sounds way too powerful, but if using it only brings more enemies, it’s actually more about buying a brief respite rather than wiping out entire levels.

However, the two threat-lowering technologies are where the real inspiration shines. Players can only lower the threat by either summoning the shield, or calling every enemy to attack simultaneously with the taunt command. This forces players to learn the layout of levels, pick defensible chokepoints that they can hold, and battle the hordes on their own terms. Success in here isn’t about killing everything, because players never can- – it’s about players picking their moment and luring foes into fights that they can’t win. It’s a layer of strategy that I was never expecting to see in a twin-stick shooter, and it works incredibly well.

…It works in most levels, anyhow. Solstice MIA‘s biggest flaw is that the devs can’t make their innovative new concepts work in every situation. Specifically, the boss fights are the game’s low point. When players can move around large, multi-tiered levels full of obstructions and corridors to use against their foes, things are great. It’s less impressive when they’re dropped into arenas and expected to battle fast and deadly bullet sponges that are relentlessly chasing them. All of the battles are winnable (the mini-nuke will ensure that, if used correctly) but the devs haven’t found a way to make the boss fights as innovative and engaging as the rest of the campaign, and they suffer by comparison.

Solstice Chronicles: MIA is a breath of fresh air in the twin-stick shooter genre. The threat system makes it feel like nothing else out there, transforming it from just another run-and-gun into something far more strategic and complex. It’s not a complete success, but it manages to add a satisfying amount of strategy without skimping on the action, which is a feat that I’m shocked no one has managed before. The ending promises a sequel, and I can only hope that the developers work the bugs out of their concept by then so that they can establish this as a whole new subgenre of the twin-stick shooter. Rating: 8 out of 10

Parents: This game was not reviewed by the ESRB, but it contains violence and strong language. The game is firing assault rifles at evil mutants. There’s essentially no content other than violence, although little of it is so traumatic that it should give any but the youngest players pause.

Deaf & Hard of Hearing Gamers: There are very few audio cues in the game, and even when they don’t have accompanying visual cues, they shouldn’t provide too much trouble. All dialogue is subtitled.

Thanks for the review. Sounds interesting. But in a world where Nex Machina exists, this game is a hard sell. It just appears too mechanically complicated to hold interest when there are twin stick shooters that are far faster and more intuitive on the market.