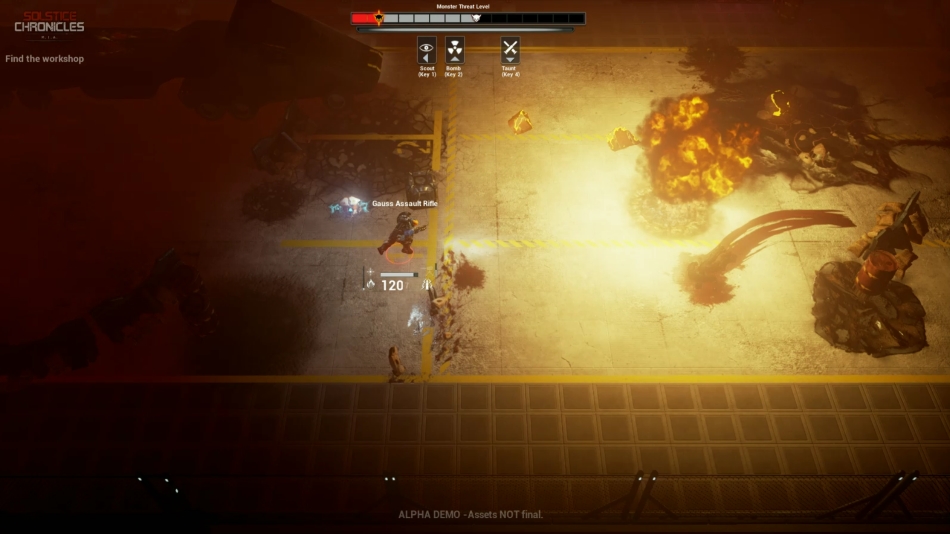 There’s something to be said for going with what works. Solstice Chronicles: MIA is, if nothing else, a prime example of a developer taking tried and true elements and using them to give players exactly what they want. The developers behind The Red Solstice have moved their Sci-fi RPG franchise into a new genre – the twin-stick shooter – and it absolutely works.

As I started playing, I could see boxes being ticked left and right. Space marine in power armor? Check. Floating robot sidekick? Check. Hordes of zombies and crawling monstrosities? Big check on that front. This is a title clearly designed to make the most of commonly-popular design elements. However, it’s not all a carbon copy of other games. Setting it on a crumbling martian facility during a monster uprising is bound to invite Doom comparisons, but the gameplay is so radically different that I suspect it will be able to distinguish itself ably, while providing the same kind of quick, brutal thrills.

Players are dropped into a sewer level with just a pistol to defend themselves and a glowing waypoint line to direct them to their next objective. It may seem strange that I’m mentioning that feature specifically, but as someone who’s spent untold hours lost in isometric catacombs trying to find my way out using a torch and muzzle flashes, it’s impossible to overstate the importance of clear directions in this kind of game. Soon enough zombies arrive, and then never stop arriving, as far as I can tell.

The developers have built a narrative, exploration-based twin-stick shooter where the action never lets up. In fact, a meter at the top of the screen lets players know just how intense the mutant threat is at any given moment, and I was never able to get it all the way down to zero. It’s a constant battle with all the blood and explosions one would expect, and it’s all manageable with the help of a droppable turret and a surprisingly adaptable robot buddy.

MIA is obviously still in development, and there are quite a few places that need to be polished (for example, enemies currently don’t stagger when shot, which just looks weird) but even in this three-level demo, it’s a strong, playable experience that has a huge amount of promise. I’d advise anyone with even a passing interest in twin-stick shooters to keep an eye on it.

Solstice Chronicles: MIA has successfully reached its fundraising goal at FIG – you can check out the details of their campaign here!

If you’d like to see the game in action, here’s forty minutes of gameplay free of all that pesky narration that I normally get up to: