Less Than A Snowball Would Have 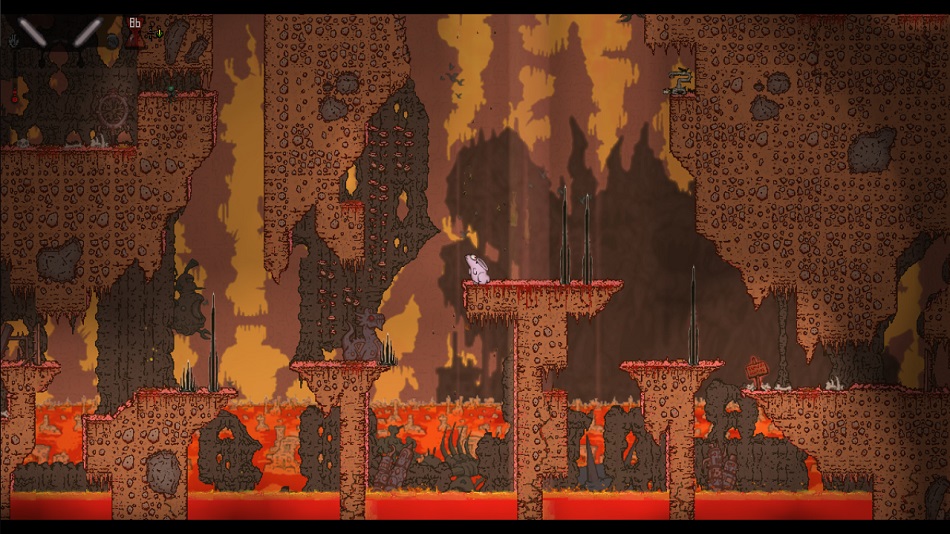 HIGH Using a demon pig as a trampoline to escape a deadly pit.

LOW Dying repeatedly because my rabbit can’t grab a ledge.

WTF The dead animal sculptures that decorate the abyss.

Sadistic platforming is a difficult genre to nail. It’s fine to throw hordes of enemies at players, or to give them ridiculously complex jumps to navigate — even luring them into deathtraps over and over again is a perfectly acceptable tactic. The genre is about punishing players for their hubris in trying to beat the game, after all. There’s only one thing that developers can’t do, though, and that’s have controls that are anything but perfectly tight. This is where Snowflake’s Chance, an otherwise impressive indie title, falters badly.

The titular Snowflake is a rabbit who started its day with one objective – find four pieces of corn. Plans go awry when the third piece of corn turns out to be cursed. Snowflake ends up being dragged to the depths of hell and assigned just 99 chances to make it all the way back to the surface. On the way, players will have to contend with monstrous animals, all manner of mechanical traps, and a dark version of Snowflake which gets larger and more aggressive every time the player dies, ensuring that the worse they perform, the harder the game gets.

Snowflake’s hell is an impressive feat of level design. It’s built of pitted stone and crumbling earth, and decorated with suffering animals as far as they eye can see. Every floor is built outwards from a central chasm that runs the full depth of the pit – in an impressively cruel move, it’s possible for a player to slip and fall all the way back to the beginning of the game from almost any height, which is an intensely dispiriting experience, to say the least.

Luckily, the game offers checkpoints as Snowflake gradually moves up through the layers of hell, but even those have a sadistic twist. A checkpoint isn’t the place where the respawned player starts from, but rather the height from which their surprisingly helpful crow friend will drop them from after pulling them back out of the abyss. This ensures that reaching a checkpoint never feels completely satisfying — yet another one of Snowflake‘s tricks to make sure players remain beaten and defeated. 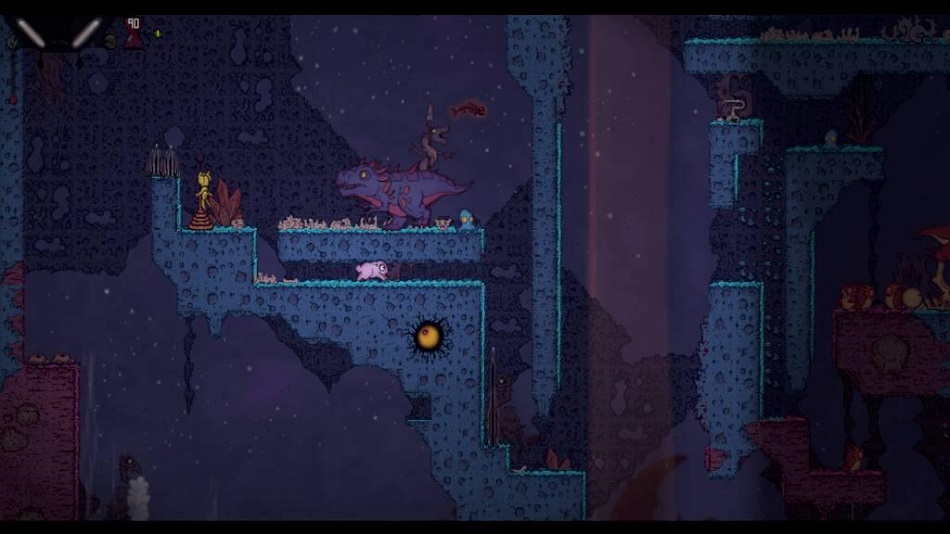 The game also offers a pleasantly complex set of mechanics to help players through. There are secret paths that can be opened if the right keys are found, spectral buddies to help keep them alive, and even upgrades to their health, power, and jumping ability that last for just a single life. The developers have obviously thought their game through completely, ensuring that play is as complex and rewarding as the art is twisted and beautiful. This quality paid to most aspects of the experience make it all the more tragic that the controls just aren’t there.

Snowflake moves in a jerky fashion, without any natural momentum. He can climb on some walls, but jumping off them is a baffling ordeal. His single attack is sluggish and nearly impossible to time, which is a big problem given how utterly necessary it is once his evil version starts getting aggressive. Snowflake also doesn’t stick well to uneven terrain, so the jump button becomes unreliable at the most inopportune moments.

The biggest problem, though, is Snowflake’s ‘climb’ skill. If a level is broken down into squares, Snowflake has a jump height of one square. He can jump over one-square-tall obstacles, and his face reaches the top of square two. If he’s pressing up against a ledge when he reaches the apex of his jump, he can clamber up to the top of a two-square ledge… except he often doesn’t. For whatever reason, Snowflake will simply fail to grab on as often as he succeeds. This move is absolutely required to beat the game, and the fact that it’s unpredictable is inexcusable.

Snowflake’s Chance looks incredible, and the work that’s been poured into its conception of hell is some of the best sadistic platforming I’ve ever encountered — I just wish I’d had a fair chance to play it. Games designed to challenge and punish their players can get away with a lot, but they can never skimp on the controls. Sadly, Snowflake’s Chance just isn’t as tight as it needs to be. Hopefully this gets repaired at some point in the future, because other than this one key flaw, it has all the makings of a minor classic in the realm of cruelty. Rating: 6.5 out of 10

Disclosures: This game is developed and published by CarlMorganArt. It is currently available on PC. This copy of the game was obtained via publisher and reviewed on the PC. Approximately 4 hours of play were devoted to the single-player mode, and the game was not completed. There are no multiplayer modes.

Parents: This game was not rated by the ESRB, but contains blood and gore, as well as extreme violence. No kids. It’s entirely about cute animals getting killed over and over again. No kids. Absolutely no kids.

Deaf & Hard of Hearing Gamers: The game has no audio cues of note, and I was able to play it just fine without sound.