Laughing Past the Graveyard 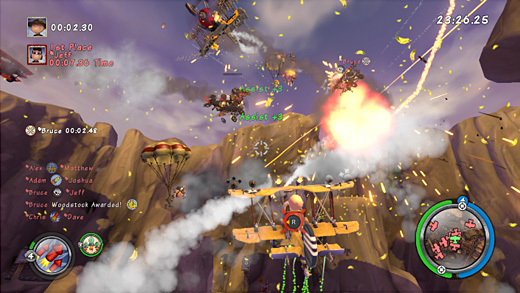 HIGH Scoring a tenth consecutive kill and being upgraded from biplane to flying doghouse.

WTF Linus is an officer in the Austro-Hungarian air force?

How long must we wait before making jokes about a tragedy? The Great War ended a little more than ninety years ago. If there's anyone left alive who fought in it, they would be well over a hundred years old. If it's thought of at all outside of history classrooms, it's only because someone questions the tradition of wearing poppies in November. We have, it seems, reached the point where not only is it acceptable to make light of one of the most heartbreakingly pointless wars in modern history, but that desecration of suffering can be marketed to children. Assuming, of course, there are any children out there who are still fond of Peanuts.

Snoopy Flying Ace is a multiplayer-intensive aerial combat title which plays like Crimson Skies-lite. It's so simplified, in fact, that I wish there was a further diminution of the word "light" that I could use to describe it—"lyt," for example. The modestly-sized downloadable game offers a series of forgettable single player and co-op missions that serve little purpose other than to familiarize players with the controls they'll be using in the online dogfighting that serves as the game's main focus. The game treats them as perfunctory at best—eighty percent of them boil down to shooting four waves of enemies as quickly as possible, and the rest are tedious exercises in stunt flying. This oversight seems especially strange when one considers that a number of the levels feature natural hazards in certain multiplayer modes. Natural hazards in the form of giant robotic war engines—the kinds of creations that would have made perfect level bosses had a little more effort been put into single player design.

Frankly, I would have preferred that the single player mode been excised entirely, since that's where the game's worst excesses in misappropriating history occur. While the multiplayer mode has players using their XBL Avatars to pilot diesel-punk biplanes in messy dogfights, the single player mode has the player controlling Snoopy as he battles squadrons of fighters led by members of the Peanuts cast playing lieutenants and colonels in the German air force.

As if it weren't bad enough to see these characters wearing the Iron Cross as if it had no meaning, the single player mode also commits the greatest sin possible against its source material: It allows the player, in the role of Snoopy, to defeat the Red Baron, level after level, fight after fight. Peanuts was perhaps the bleakest, most fatalistic entertainment ever offered to children on a daily basis—if there's an overarching theme to the half-century of strips, it's the futility of human endeavor. People will never get what they want, and anything they attempt will end in failure—but they have to keep trying anyway, because the human condition is to strive without positive result. 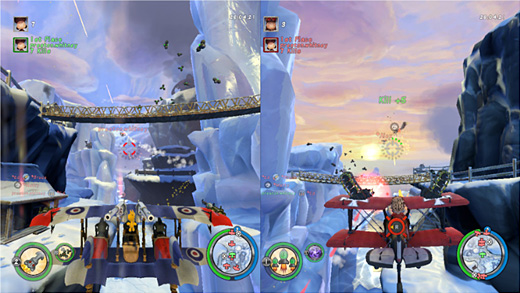 Just like Charlie Brown never gets the Red-Headed Girl, Snoopy never shoots down the Red Baron—that refusal to let the characters have what they want is the whole point of the strip. Letting the player do so as a matter of course is just like letting some random punk beat up Darth Vader and the Emperor at the end of Star Wars: The Force Unleashed: it undercuts the entire point of the original text for a momentary thrill.

The game is far more successful and far less offensive in the multiplayer section, although that's not without its flaws, either.

For the most part the simplified controls work like a charm, allowing the player to zip around the map, easily locating their prey. It's the maps themselves that are the problem—they're far too small for the number of players that regularly compete on them. Each one is less than a minute wide, and prominently feature wide-open central areas that almost force the players to congregate there. I don't remember playing a single game that didn't wind up with all the players blasting away in a swarm like a group of heavily armed gnats. Which brings me to the game's weapons… I'd call the variety of massively over-powered special weapons "unbalanced," except that doesn't really describe the problem.

It's not that there's just one or two weapons that flawlessly lock onto enemies or kill them instantly—it's that nearly all of the weapons have one or both of those qualities. This is the one of the first flight combat games I've seen with progressive, auto-regenerating health, but it's not actually that useful. I only ever saw a handful of situations where a damaged player lived long enough to claw back some of their precious life.

Perhaps I've been a little harsh on Snoopy Flying Ace, and if so, I'd like to blame the attitude on my dread prospect of this game's suggested trend continuing. Whenever the frenetic action slowed, and I was given a moment to consider just how absurdly horrible the game's marginalization of tragedy was. Watching the Peanuts gang playacting the war to end all wars led me to imagine a day, nearly half a century away, just a few years after Bill Watterson's death, in which an enterprising company will develop a 4D holomind amusement where gamers battle in a hilarious version of the Second World War where Calvin is Hitler and Hobbes is Mussolini. Snoopy Flying Ace is the first step in the direction of that result, and as such, we should seriously consider whether or not this is a slippery slope that anyone ought be heading down. Rating: 4.0 out of 10.

Disclosures: This game was obtained via publisher and reviewed on the Xbox 360. Approximately 3 hours of play was devoted to single-player modes (completed 1 time) and 10 hours of play in multiplayer modes.

Parents: According to the ESRB, this game contains violence. Parents shouldn't let their children play this game—while the violence is cartoonish enough to be inoffensive (everyone bails out at the last moment, parachuting to safety) and the 3D depictions of the Peanuts crew are sufficiently adorable, the central historical hatchet-job of the game's premise might do enough damage to their long-term understanding of the horrors of armed conflict that you should steer them in another direction.

Deaf & Hard of Hearing: You'll have no problems with the game—there's no story to require subtitling, and while audio cues are useful during combat, onscreen indicators do a good job of filling the player in on where their opponents are, and just when they need to pull a quick maneuver to break a missile lock. That's not a reference to targeting systems, either—there's literally a missile that homes in on opponents and sinks hooks into the plane before detonating.

Can I just say, this review has one of the best “WTF” lines of any I’ve seen on the site. Some terrific observations about Peanuts in here to boot.

I’d be more interested in games that explore war for profit or war against imaginary enemies.. that emphasize the relationship between business and destruction of property and political rhetoric. War as service industry. Metal Gear touches this, but only as an aside. There was an episode of the excellent anime ‘Kinos Journey’ that featured a militarized country that stops fighting it’s enemy neighbor-state by turning their war into a friendly competition where they both invade a neutral poor country and kill innocent civilians for ‘points’. That’s uncomfortable entertainment, but that’s what I’d like to see.

I think you raise an interesting point, especially in light of the recent controversies about Six Days in Fallujah and the upcoming Medal of Honor. The complaint in these cases is often that it’s “too soon” to have games, even thoughtful and serious games (I am not alleging that MoH is thoughtful or serious), about these wars. But when is it long enough ago that we’re comfortable making entertainment out of mass death? The wars end, but the resulting personal damage persists for decades. The cost of our current wars, in psychological problems and broken families, will continue to be… Read more »

This review made me realize how bleak the Peanuts actually are. No wonder I am so messed up, considering that my favourite childhood cartoons ranged between the bleakness of Peanuts and cynicism of Garfield 😛