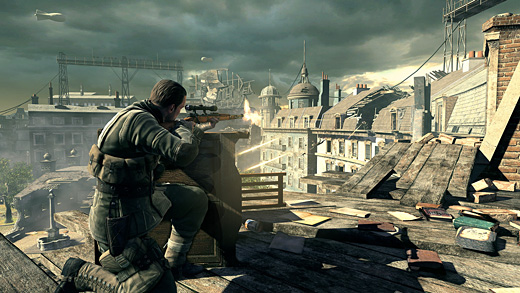 LOW Are those tank guns manned by psychics?

WTF And then the bullet plowed through his head, popping his eyeball before blasting off the back of his skull! (Repeat 100 times.)

It's rare to give a positive review to a game that repulsed me, so Sniper Elite V2

has put me into somewhat of an awkward position. In a profound way I'm happy that there's a game that allows me to crawl through the rubble of a war-torn Berlin, find a German officer with my binoculars, sight down my rifle's scope (also adjusting for bullet drop and windage) before pulling the trigger and ensuring a villain's death. It's what the game chooses to follow that trigger pull with that gives me such pause.

To quote the back of the game's box: "X-RAY KILL CAM see organs tear and burst, bones and teeth shatter, as your bullet passes through your enemy."

I can't say I wasn't warned about the game's more obscene aspects, but the box failed to warn me how viscerally disgusting it would be to watch a bullet shattering spines and tearing lungs to shreds, nor how distressing I would find it watching that kind of violence literally hundreds of times before the game was over.

Sniper Elite V2 isn't a sequel to Sniper Elite, but rather, a remake—this is Rebellion's second shot at getting their magnum marksman opus right. In that respect, V2 is a qualified success since almost all of the previous game's flaws have been repaired—a background noise meter has been added to make sound-masked sniping something other than a pipe dream, the running and shooting content has been massively scaled back, and the story has been improved, giving players a goal far more important than slightly delaying Russia's nuclear program. However, all that would be damning V2 with faint praise if the game didn't succeed in its most important goal—being an incredibly satisfying sniping simulator. 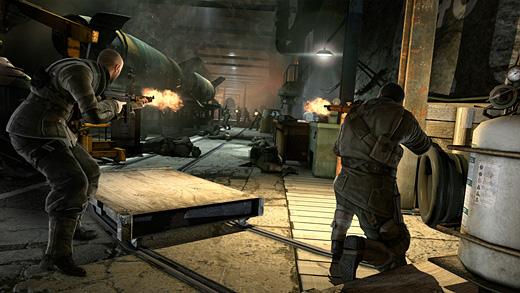 Where the first game threw the player into the world of sniping and expected them to pick it up as they went along, V2 offers just the right amount of hand-holding as things get started. In addition to the adjustable difficulty (the player can decide exactly how realistic they want the sniping to be) the game offers a slo-mo "empty lung" mode which places a marker on the screen, letting the shooter know where their next bullet will land. This mode does a fantastic job of training players in the intricacies of calculating bullet drop—after a few dozen times of doing just what the marker told me, I was able to simply eyeball headshots at a few hundred meters.

The only problem with the sniping is that there simply isn't enough of it. There's far more than last time around and the game's maps have been designed so that using the sniper rifle is almost always an option in gunfights, but despite the larger role that sniping plays in the game, it still lacks a wide variety of truly dramatic sniping setpieces. There are a couple of ambushes, and a thrilling sequence in which the player is invited to interrupt an execution, but by and large, the player will spend most of the game crawling from cover to cover, taking potshots at distant riflemen. This is a game about being a heroic sniper, yet there are only a handful of opportunities to shoot the driver of a moving vehicle—and in only one of them does it result in something interesting happening. What kind of sense does that make?

This problem is best exemplified in the game's challenge mode. One would assume that such a mode would involve taking out a set number of targets within a certain amount of time, or following a particular criteria. The upcoming Hitman game's "Sniper Challenge" demonstrated this concept beautifully. Instead, V2 offers a bog-standard survival mode  in which the player is dropped into one of a few shockingly small maps and tasked with battling wave after wave of enemies who relentlessly rush their position.

On the subject of relentless rushes, V2 suffers from the same massively unfair AI quirks that its predecessor did. Unless a masking sound (bells, explosions, klaxons) is covering it, the sound of the player's gunshot will invariably draw every single enemy's attention with unerring precision. They're so alert that it borders on comical.

At one point I fired a shot into the grenade on a soldier's belt, causing it to detonate. Despite the fact that my rifle's report occurred within the same second as a deafening explosion, another soldier standing just twenty feet from the blast was able to tell not only that a bullet had triggered the boom, but exactly from which window the bullet had originated. 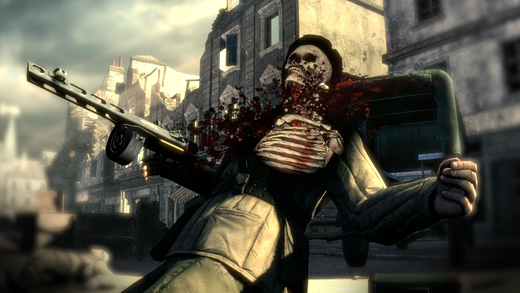 Tanks are the worst offenders—it's a proven fact that a real tank can have trouble seeing other tanks, in this game they serve as impossibly hyper-vigilant sentry turrets. In the most ridiculous instance, I was tasked with eliminating a tank patrolling a perimeter outside an underground base. I went about the task by crawling through a series of buildings, then finding a doorway completely blocked by rubble except for a tiny 18-inch gap at the top. Lying three yards back in near-complete darkness, I aimed through the gap and waited for the tank to pass my target zone, a full 100 yards away. Imagine my surprise when the tank slowed, swiveled its barrel at my location and opened fire. I understand the developers want their enemies to be challenging, but this isn't a game about killing psychic Nazis.

Now, back to the X-Ray Bullet Camera.

I'm no stranger to violence, but this is something else altogether. The developers at Rebellion have taken the key reward moment of sniping games—setting up the perfect shot, then following the bullet in slo-motion to its target—and perverted it. The very first time I pulled the trigger in the game I was treated to the sight of a man's eyeball popping. If that doesn't disgust you, it's only because I don't have the stomach to describe it in more graphic detail. I caused visually similar acts to happen more than thirty times over the course of V2—only the developers didn't present it as a monstrous act of violence designed to shock the player's sensibilities, but rather offered it as a prize for following the game's rules.

In the last few levels I found myself aiming at enemy torsos—after all, dead is dead, and no one deserves to die that badly. That's right, the game convinced me to worry about how cruelly Nazis were dying. Before booting up V2 I'd have thought that impossible.

While there's been plenty to complain about in Sniper Elite V2

, I can't condemn the game overall. There are great 1st- and 3rd-person shooters out there, and this can't be counted among them, but in the sniping subgenre, V2 is basically peerless and should be respected as such among its audience. What are fans coming to a sniping game for? Verisimilitude in trajectory modelling, and a chance to shoot someone who has it coming. Sniper Elite offers both in spades. It could be better, but it delivers on all of its promises, and stands head and shoulders above the competition. Rating: 7.5 out of 10.


Disclosures: This game was obtained via publisher and reviewed on the Xbox 360. Approximately 10 hours of play were devoted to single-player modes (completed 1 times) and multiplayer modes were not sampled (I was unable to find a game online).

Parents: According to the ESRB, this game contains intense violence, blood and gore, language. Dear Lord, don't let your children anywhere near this game. It's not for them. Just… no. This is violence so far on the other side of acceptable that you must protect them from it at any cost.

Deaf & Hard of Hearing: You're still going to have trouble hearing when enemies have spotted you, but forgiving amounts of regenerative health should get your through the rough parts, dialogue and plot sequences are subtitles, and an onscreen marker finally offers you the ability to pull off the masked shots that were impossible last time around.