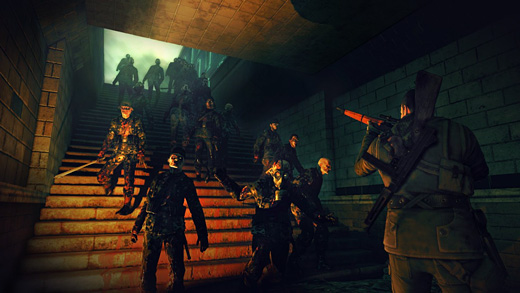 LOW Anything with skeletons. Seriously, the skeletons are horrible.

My problems with Sniper Elite V2 were well-documented, and beyond a few technical issues, they boiled down to this: reveling in the brutal, anatomically explicit destruction of human beings left me with a bad taste in my mouth. The sniping mechanics were great, there were some well-designed levels, and overall the whole thing felt polished and professional. It also felt deeply disturbing.

The developers have addressed this specific complaint in the most logical way possible—by populating the war-torn streets of Germany with zombies! While this new iteration comes with a few flaws all its own, it's certainly solved its predecessors' biggest problem since it's now entirely possible to play the game without feeling like a terrible person.

Throwing players into the action with only the barest figleaf of exposition, Sniper Elite: Nazi Zombie Army

(NZA) invites 1-4 players to stalk their way through shattered structures, find clean fields of fire, and then watch as bullets tumble in slow-motion through the rotting organs of a horde of zombified nazis.

While it is technically a stand-alone game (purchase of Sniper Elite 2 is not necessary), NZA is built on Sniper Elite's architecture, and as such recreates all of that game's features and flaws. The cover system is still fairly useless, but since almost none of the game's enemies have guns, it's not much of a flaw here. The sniping mechanics are as gorgeous as ever, once again giving players a choice of just how realistic they want marksmanship to be.

There is one key restriction, however. Unlike in V2, sniping difficulty has been tied directly to overall difficulty level, and the 'custom' difficulty option has been removed, even for single-player games. While I'm not certain that letting players decide exactly how hard they wanted the game to be was a most-used feature in V2, its was definitely a nice addition, and I missed it this time around. 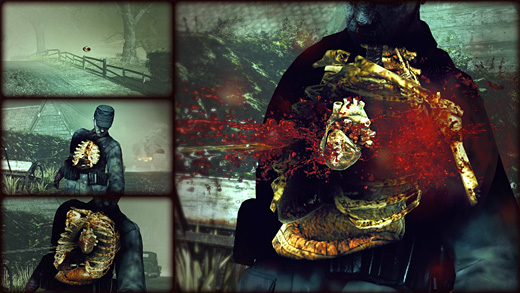 NZA takes place over five levels culled from V2, but all of the maps have been completely redecorated so the game never seems like a simple revisiting of well-worn locations. While the plethora of bloody pentagrams and clutches of gutted corpses get a little over-the-top at times, the set dressing, along with thick fog and a notably creepy soundtrack, do a fantastic job of giving NZA a tone and atmosphere all its own.

The new enemies are more of a mixed bag. Zombies are exactly the foes one would expect, lumbering forward with relentless bloodlust. The game manages to put two twists onto this classic villain, however, which keeps the game interesting.

Vital shots are just as important here as in V2—zombies not executed with a headshot have a bad habit of getting right back up to continue the fight. The second development is actually quite a coup on Rebellion's part—the sheer number of zombies that can appear onscreen is huge for an FPS. At certain points the players will find themselves having to defend strongholds from a 'siege' of zombies, and here that word is not being used lightly.

Dozens of zombies clog the narrow city streets, and unlike the lumbering mooks of Dead Rising, each one of these resurrected soldiers can easily kill the player if they manage to get within arm's reach. Every one of these sieges is a skilltesting struggle the requires expert marksmanship, clever planning, and the careful implementation of high explosives. This is even more true in co-op mode, where the number of zombies for each fight is more than doubled.

The other foes are where the game gets into a little trouble. The enemy snipers are just fine—in fact, they're better than the ones in V2, since these ghouls can jump from rooftop to rooftop, rather than just ducking in and out of a single piece of cover. Less entertaining are the giant zombies that fire an MG42 and wear bulletproof coats. Having an enemy that needs to be shot in the head is nothing new, but asking players to shoot the same guy five times in the face goes from challenging to frustrating— especially when half a dozen will show up per level. 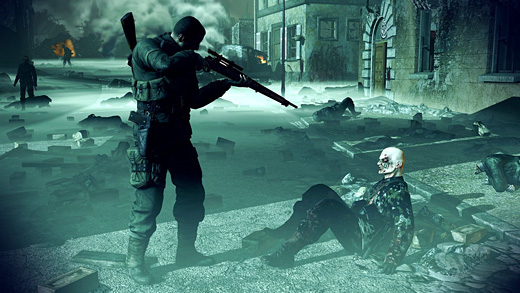 Then there are the skeletons who represent everything wrong with the Sniper Elite franchise, in that they basically cannot be sniped.

From time to time a portal will open and a group of skeletons will leap out—visually, they're an interesting idea, but in practice they simply don't belong in the game. The skeletons run so fast that they can't be tracked with rifles, and even if the player manages to get a bead on one, their animation is so jerky that targeting their vital organs is nearly impossible. This forces the player to take out their pistol or SMG and just start firing wildly. It’s super-effective, but also the exact opposite of the gameplay that people are coming to a Sniper Elite title for.

While there's nothing original about Rebellion's decision to offer 4-player zombie-killing co-op, its implementation in NZA is nothing short of fantastic. Every level in the game is littered with multi-tiered killzones that give sniper teams a chance to spread out and fire on zombie hordes from a variety of angles and elevations. Teamwork is both easy and incredibly necessary—as mentioned above, there are far more zombies to tend with in the co-op mode than the regular game, so only by focusing fire is survival even possible.

While these hordes of zombies are something to see, there is one major hitch in the co-op mode: the number of enemies do not scale based on the number of players, and there are only two settings— single player or co-op. This isn't an issue normally, but if a player or two drops out during the course of one of the half-hour levels, the remaining two players will suddenly find themselves up against a horde of the undead so huge that they simply cannot be defeated.

makes a worthy addition to the Sniper Elite franchise. With its extremely budget-friendly price and surprisingly large amount of content, NZA will please existing sniper fans, as well as anyone curious to check out what it might be like to shoot a few hundred zombies in the face from 70 yards away. The skeletons are a disaster and the bosses aren't great, but the core mechanics are so good that it deserves a look solely on their strengths. Rating: 7.5 out of 10.


Disclosures: This game was obtained via publisher and reviewed on the PC. Approximately eight hours of play was devoted to single-player modes (completed one time) and four hours of play in multiplayer modes.

Parents: The game is not rated by the ESRB, but it contains blood and gore, intense violence. Parents should keep their children very far away from this game. There's no booze, smoking, or sex, but you probably don't want your children spending this much time looking at zombies' internal organs.

Deaf & Hard of Hearing: You will be mostly fine with the game. For the most part you'll have visual warnings about approaching zombies, and all instructions are presented as text. Every now and then some skeletons will teleport in behind you, however, and without an audio cue to warn you, don't be surprised if you find out they're there by taking a non-fatal hit.

This is only for PC at the moment? That makes my Xbox sad.