One Shot, So Many Kills 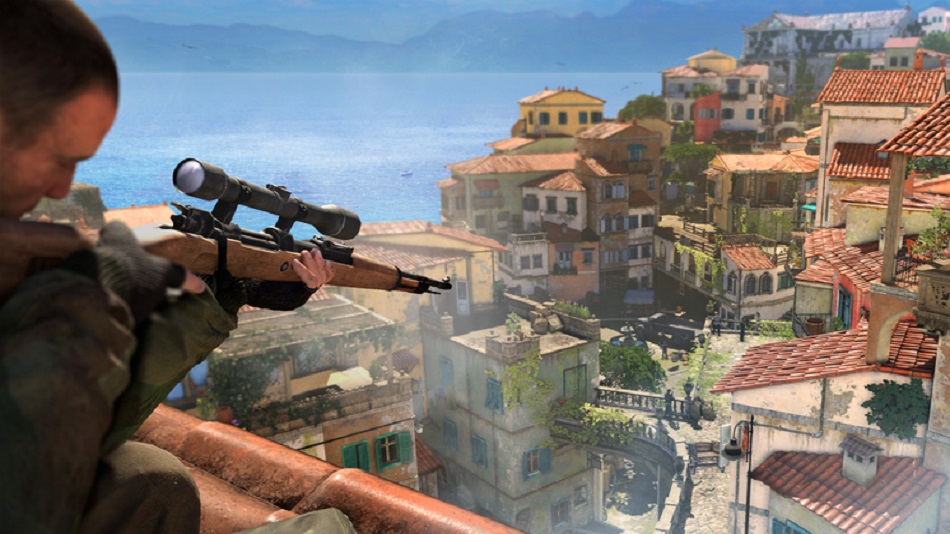 HIGH Pulling off a 400-meter headshot in high winds.

LOW No longer being able to choose what kind of scope I want to use.

WTF The often-strange bios that appear over enemies when watching them with binoculars.

Well, Rebellion has done it again. Every time a new Sniper Elite game has come out since 2012’s V2, I`ve noticed that each title is a marked improvement over the previous one. There’s something new this time, however — something that elevates Sniper Elite 4 beyond incremental improvement, marking it as the first great game in the series. Rebellion has finally embraced open levels that can be fully explored and traversed, and the difference is tremendous.

Moving the action to Italy, Sniper Elite 4 follows franchise hero Karl Fairburne on his quest to safeguard the Allied invasion of Sicily. The Axis want to deploy radio-operated drone bombs capable of sinking the fleet before it nears land, and they must be stopped. To accomplish this he’ll have to work with Italian partisans, collect secret documents, and, naturally, shoot people from hundreds of meters away.

At long last, Rebellion has both the will to design an incredible sniping game and the technology to realize their dreams. Gone are the tight canyons and claustrophobic cities of the previous entries. While players could (at best) expect three or four great sniping setpieces in the earlier games, SE4 offers choice sightlines and perfectly-placed roosts in every single level. Each area also offers a wide variety of sound-masking options to give players the chance to shatter skulls all over the map without the enemy having the slightest idea where the shots are coming from.

The first level acts as a kind of statement of purpose — Karl is set loose on an island where the drone is being tested, and tasked with killing a general and his four officers. Players can approach this task any way they want, including blasting their way from cover to cover, riddling Nazis with SMG fire, sneaking around patrols, setting traps and slitting throats, or — and this is where the game really stands out — climbing to the top of a tower and shooting the general from 400 meters away. Sniper Elite 4 is now both the most versatile entry in the franchise, and the most sniping-focused. 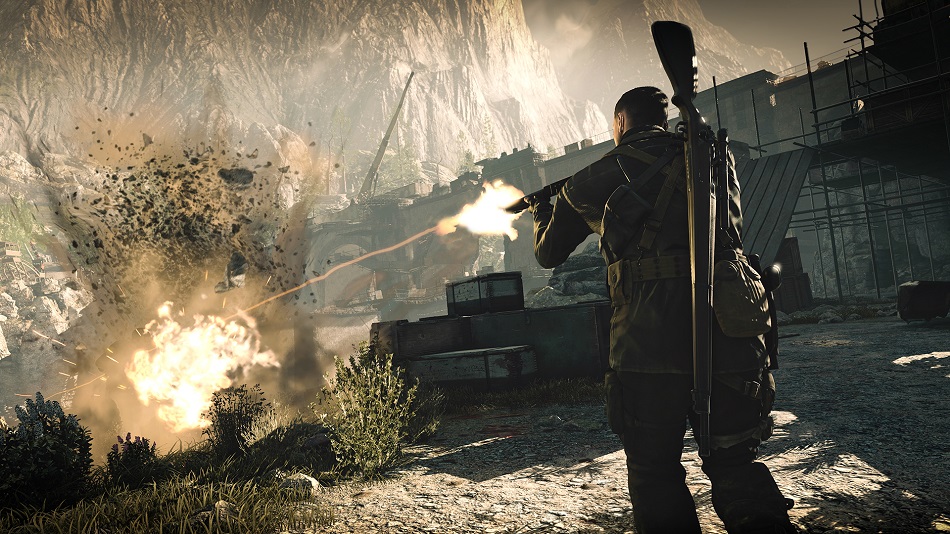 Sniper aficionados will find that playing on Authentic difficulty is once again a sadistically satisfying experience. Where the normal mode simplifies matters by letting players zoom in and out with both the sniper scope and the binoculars they use to mark targets, Authentic locks them into using a standard magnification – 20x for the binocs, or considerably lower for the rifles. Not being able to mark targets and watch silhouettes move behind cover changes the game completely. Accurate shooting requires binoculars to find out an enemy’s exact distance, adjusting the scope for bullet drop, and some quick calculations to determine how wind strength will affect their aim. It’s harsh training, and at the start of the game, every successful shot feels like a miracle. By the end of the campaign, players will be able to hit their marks entirely on instinct.

The multiplayer is excellent once again. While it features standard deathmatch modes, the real standouts are the sniping challenges. No-Man’s-Land mode forces teams to stay on opposite sides of a barrier, engaging solely with rifles. Distance King, scores players (or teams) based on how far their killshots flew before putting their opponents down. Both work incredibly well and feel like nothing else out there. While there are just a few maps currently available, each is dense and complex enough to allow for intensely strategic gameplay.

While the entire campaign can be played in two-player co-op, the standout co-op mode is Overwatch. This mode offers two huge maps packed with objectives, but the twist is that one player controls Karl, moving along a series of cliffs and bridges looking down on the mission area, while the second player controls a partisan commando who must sneak through the levels, stealing files and sabotaging facilities. The commando also marks targets for the sniper to execute, and the sniper picks off the soldiers that have the commando pinned down under heavy fire. It’s a completely different experience than the campaign, but it’s every bit as polished and fits perfectly alongside it. It’s only two levels, but they’re beautifully constructed and do an incredible job of encouraging and transforming teamwork into satisfying gameplay.

Sniper Elite 4 is the best sniping game I’ve ever played, and is absolutely the high point of the series. This is a perfect example of what can be achieved if a developer understands what their game’s potential is, and never stops working towards it. Rebellion has made huge leaps forward with every new entry in this series, and they’ve finally reached a point where the results are flat-out incredible. I can only imagine the great things they’ll accomplish in the future. Rating: 9 out of 10

Parents: According to the ESRB, this game is rated M and contains violence, blood and gore, strong language. As always, I’m going to suggest that you keep the kids as far as possible from this title. Exploding eyeballs, crushed testicles, punctured livers spewing bile everywhere — this is as disgustingly violent as games get. I know it’s tempting, especially today, to teach children the value of shooting Nazis and Fascistas, but try to find a game that’s a little less gruesome unless they’re in their mid-to-late teens.

Deaf & Hard of Hearing Gamers: On the higher difficulty levels sound is an important element of the game’s design, but so long as you turn the mini-map on you should have no trouble playing the game. There’s still a sound-masking symbol onscreen to let you know when it’s safe to snipe.

I had lots of fun with this game. It offers you sandbox freedom, without the open world tropes. It’s a very fun and “open” game and is highly replayable. Also a great game for “in between” games. Play some levels, put it down for another game and pick it up later to plays ome new levels.

“This is a perfect example of what can be achieved if a developer understands what their game’s potential is, and never stops working towards it” Yes!! Now if only other devs could learn from this example. So many potentially great games get squandered because of an unwillingness to improve.

Great review. Definitely going to play this one.