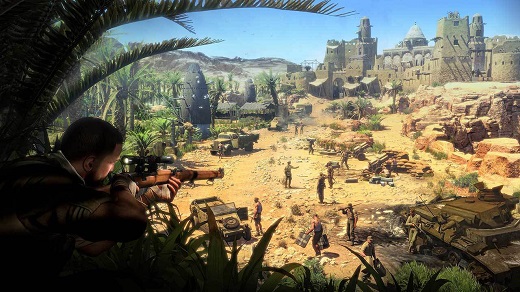 HIGH Sneaking up on a tank and putting a bullet in its gas hatch.

LOW Dying stupidly and finding out that my last checkpoint was 90 minutes ago…. because there aren't checkpoints.

Sniper Elite 3 Ultimate Edition takes players back to the North African Theatre of World War 2, offering all the sniping action of the original release, along with three new missions on two new maps, and a host of new weapons to experiment with.

I enjoyed this version far more than my last experience with the game, although that's less to do with the fairly mixed new content, and more because I used this opportunity to try the game's 'realistic' difficulty setting. To my surprise, I found it to have a transformative effect that elevated the game's accomplishments and made its flaws melt away.

The meat of the Ultimate Edition is a three-mission pack about saving Winston Churchill from assassination by a team of elite German commandoes, but these missions are something of a mixed bag.

The first reuses one of SE3's maps—it's an inspired reuse, with interesting enemy placements and plenty of new obstacles to overcome, but it's still not a wholly new mission. The second takes place inside a secret weapons lab. It's an interesting location, but far too small for many sniping opportunities to arise. The mini-campaign is wholly redeemed by the third new mission, which has two halves. The first concerns eliminating foes in and around a cliffside village and a Roman ruin. The second is even more impressive, as it's an epic sniper duel against a team of marksmen—exactly the type of nail-biting setpiece action that SE3 was woefully short of.

The new weapons added to this version aren't anything special. While it's nice to finally have a quick-firing pistol to make the stealth sequences a little less awkward, the new rifles (each with their own strengths and weaknesses, of course) aren't so different from the four base weapons. Their inclusion seems mostly like a nod to firearms aficionados.

While the bonus content may not set the world on fire, I'm still going to recommend the Ultimate Edition more strongly than I did the base game, and that's because of my experiences with the 'Authentic' difficulty level. It's rare that a harder difficulty level changes not only how a game is played, but what it is on a fundamental level, but this isn't just a sadistically difficult way of playing. ‘Authentic' is a new game, and a much better one.

Playing on this level of difficulty takes away all aiming assistance, the mini-map, and the ability to tag enemies. Where SE3 allowed players to muddle through with decent stealth skills and sniping only when it was convenient or flashy, Authentic difficulty makes sniping a necessity, and it's players' only hope for survival.

In this mode, enemies are smarter and far more accurate, and their bullets are incredibly deadly. The only way to survive is to develop the kind of sniping skills that the game should have been about all along—things like sneaking from cover to cover, setting traps, and shooting enemies in the head and then disappearing before their allies can figure out the shot came from. Doing these things feels vital and intense in a way that the regular game never did. While in this mode I strongly recommend that the X-Ray Bullet Cam be turned off before playing. Not only does it seriously distract from the flow of combat, avoiding indulgence in the gore is considerably less damaging to the human soul!

However, even this stellar version isn't without flaws.

Since players can't count on a visual cue to calculate their bullet drop, it only makes sense to use the rifle with the highest muzzle velocity, since it makes long-range shooting something other than impossible. There's just no reason to ever use the other guns. The other drawback is that in-mission saving is completely turned off for Authentic difficulty, and these are some punishingly difficult levels. The fact that one mistake can cost players a full hour of progress provides a significant disincentive to trying it out. I understand that letting players save and retry shots as many times as they want would have drained the tension that's so vital to this mode's success, but Rebellion could have left automatic checkpoints in to make the thing a little more accessible without compromising their vision.

Sniper Elite 3: Ultimate Edition isn't a huge improvement over the original version, but going back and playing it again showed me that I'd seriously underestimated that game in my original review last year. On second glance, it's an amazing sniping experience available at a budget price. This is a game that shooter fans who are willing to push their skills and patience to the limit absolutely shouldn't miss. Rating: 8.5 out of 10


Disclosures: This game was obtained via publisher and reviewed on the PS4. Approximately 20 hours of play was devoted to single-player modes (completed 1 time) and 3 hours of play in multiplayer modes.

Parents: According to the ESRB, this game contains blood and gore, intense violence, language. Dear lord, don't let your children anywhere near this game. It's not for them. Just… no. This is violence so far on the other side of acceptable that you must protect them at any cost.

Deaf & Hard of Hearing: You should have an okay time. This time around there are clear visual signals letting players know when they've been spotted, and even a distance meter letting them know how far they are from safe cover, so they won't have to rely on hearing an enemy say 'hey, where did he go?'. The onscreen 'sound masking' icon makes a return, allowing you to silently snipe foes without trouble. That being said, if you want to try playing it on my preferred 'Authentic' difficulty level, you're going to be in a world of hurt. Without any visual cues for offscreen enemy positions or alertness, audio cues are all the game offers to let players know it's safe to move and shoot. Consider that mode—the best version of the game—basically unplayable.