Back to the War Crimes 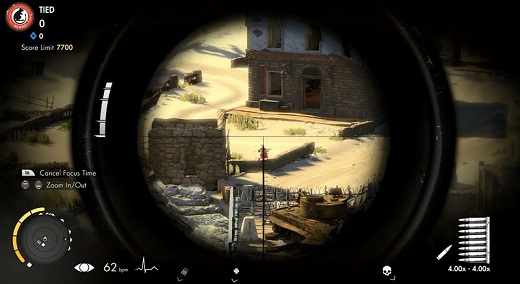 HIGH The sniping-only multiplayer. Wait, did I seriously just say multiplayer was the best part of the game? Huh?

It seems that having a genre entirely to themselves has driven the developers at Rebellion to get stagnant, creatively. This is only their third Sniper Elite title, and while technical advancements have made this their best-looking, best-playing sniping game to date, there's surprisingly little to hold a player's attention across its paltry 8 stages.

A third-person shooter with a focus on sniping and stealth, Sniper Elite 3 drops players into Africa and tasks them with foiling a mad scientist bent on constructing the largest tank the world has ever seen. It's a notably smaller threat than the nuclear science and super-powered V2s of the previous games, but at least moving the setting from crumbling European cities to the wide-open desert has put an interesting new spin on level design. Where before the player moved along prescribed paths from one encounter to the next, now snipers are offered relatively open areas that can be traversed at will, allowing them to find their own favorite vantage points.

In an unfortunate choice, the game's focus is once again placed heavily on stealth. Rather than simply finding a high position and killing enemies from it, each level's objectives force the player to crawl through the dirt for minutes on end, using a cover system to hide from enemy patrols while infiltrating German encampments. I continue to be baffled at the comparatively small amount of sniping in a game with 'Sniper' in the title.

To the developers' credit, the game is at least no longer actively hostile to players who want to actually snipe, as the previous two titles were. Opportunities to mask the sound of gunshots are far more plentiful than ever before, sniper 'nests' have been placed on the map to offer prime shooting angles, and firing a single unmasked shot no longer alerts every solider on the entire map to the player's exact position. Unfortunately, the game now lacks any notably dramatic sniping opportunities.

Where the previous game was light on interesting sniping situations, at least it allowed players to shoot a quarter-mile from one building to the next, blow up a rocket as it was being launched, and shoot a fleeing Nazi out of his car. SE3, by comparison, offers no setpieces of any kind. While most of the game's enemies can be sniped, they can just as easily be stabbed or machinegunned. Simply put, sniping never feels like a skill essential to the mission's success.

Of course, this wouldn't be a review of a Sniper Elite game if I didn't take a moment to consider the series' trademark 'X-Ray Camera' in which players are treated to the sickening spectacle of bullets tearing apart internal organs, smashing spinal columns, and—most frequently—popping eyeballs.

Having recovered from the soul-wrenching experience of watching skulls shatter over and over in V2, I was able to engage with SE3's excessive violence from a more detached, analytical position, and found it to be strangely lacking and haphazardly implemented. If I shoot someone in the arm, I'll see their bones shatter, and it's the same with legs and skulls. But, in the incredibly likely event of firing a bullet into someone's torso, the bullet will magically pass through the victim's ribcage, allowing it to damage organs without obstruction. It's a strange oversight.

Even stranger is the fact that the bodies of the people I snipe offer no external sign of damage. A bullet can plow through someone's face, completely destroying their palate, nose, and popping both eyeballs, but when I look at the corpse, the face is completely unmarred. It's bizarre. I'd write it off as the developers assuming no one would ever get close to a body they'd sniped and trying to save themselves some work, but the game encourages players to search every single person they kill in the hopes of uncovering weapon upgrades. This missing gore seems like an inexcusable lapse.

Sniper Elite 3's saving grace is a fantastically well-implemented multiplayer mode that makes competitive sniping an exciting activity. The secret of its success is almost shockingly simple—scoring is based solely on how far away the killer was from their victim. So while it's possible to sneak up to an enemy's sniper nest and toss in a grenade, it's worth just 1/100th of an across-the-map headshot that a distant sniper can pull off. It's an elegant solution that creates a tense atmosphere unparalleled in other multiplayer shooters. On the downside, there are—at press time—just two sniping maps available, a lack of variety that gets tiresome quickly.

With its high-quality ballistic modelling and gruesome death scenes, Sniper Elite 3 offers exactly what fans of the series demand, but still comes nowhere near living up to its potential. Despite the title, this still fundamentally isn't a sniping game—it's a shooter with sniping in it. The most puzzling thing about the missteps here is that the devs understood enough about sniping to produce a great multiplayer experience… So how is it that none of that insight made it into the core game? Rating: 7 out of 10


Disclosures: This game was obtained via publisher and reviewed on the PS4. Approximately 10 hours of play was devoted to single-player modes (completed 1 time) and 6 hours of play in multiplayer modes.

Parents: According to the ESRB, this game contains blood and gore, intense violence, language. Dear lord, don't let your children anywhere near this game. It's not for them. Just… no. This is violence so far on the other side of acceptable that you must protect them at any cost.

Deaf & Hard of Hearing: You should actually have an okay time. This time around there are clear visual signals letting players know when they've been spotted, and even a distance meter letting them know how far they are from safe cover, so they won't have to rely on hearing an enemy say 'hey, where did he go?'. The onscreen 'sound masking' icon makes a return, allowing you to silently snipe foes without trouble.