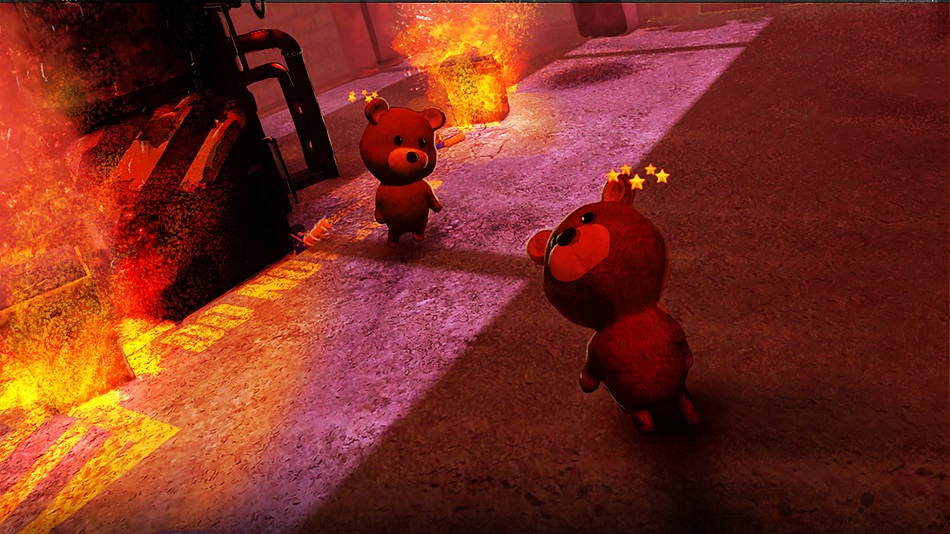 HIGH Tossing my gun thirty feet into the face of a bear riding a bomb.

WTF Every part of Franklin’s plan.

More VR games than I can count have struggled with letting players toss objects accurately, and all have failed. In fact, certain levels of the otherwise-excellent SUPERHOT  VR are nearly unplayable due to terrible throwing mechanics, and whole sections of Lethal VR were just a wash. Tossing a grenade anywhere but five feet in front of one’s own feet was all but impossible in Brookhaven. For a while, it seemed that no one would ever get throwing right, but never let it be said that it’s impossible to crack this mechanic in VR.

Who could have imagined that it would be Sneaky Bears, of all games, to cross that finish line?

A wave shooter set inside a teddy bear factory, Sneaky Bears puts players in the role of the lone human survivor of a sentient teddy bear uprising. They’re sick of being bought and sold like cattle and being cuddled by children, so they’re building an army to wipe out their oppressors. It’s up to the player – armed with a foam dart gun, of all things – to stop the bears in their tracks and defeat their nefarious leader, Franklin.

Clearly built with the Move controllers in mind, Sneaky Bears runs players through three different challenges, each with five levels of difficulty. This is enough content for the game to last around an hour, assuming the player doesn’t have to restart too often, and they shouldn’t have to since it offers a fairly reasonable challenge level. The bears move fairly slowly and the tracking of the Move controllers is downright excellent, ensuring that players will be able to pick off bears all the way across the large warehouse rooms when the situation calls for it. 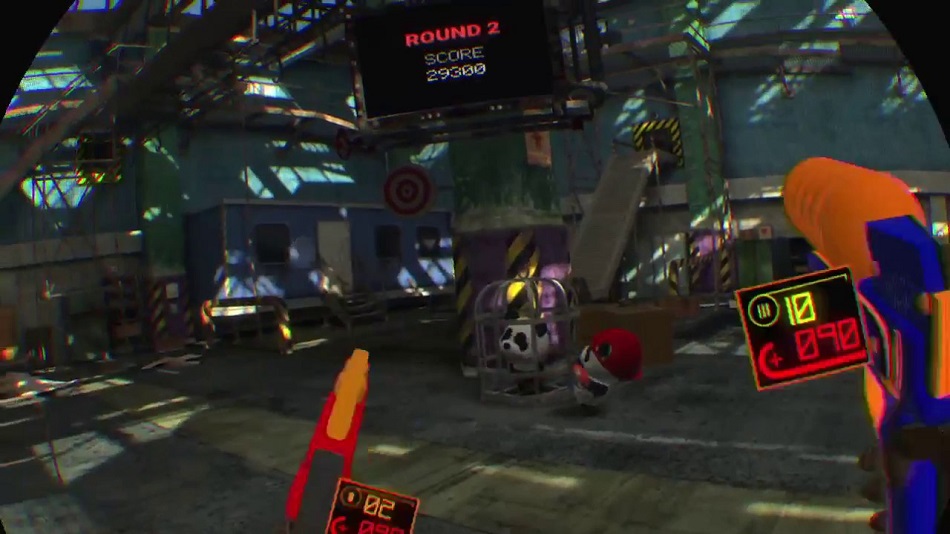 The three modes have key elements in common – in each map the player is armed with a pistol and a secondary, mode-dependent weapon, and there are always a few bears charging forward to try and beat the player into submission. There’s enough variety in the activities to ensure that the different levels don’t just feel like the exact same activity over and over again, though. Players will use a spray gun to put out chemical fires in one, and disarm bombs with a freeze gun in another, for example.

While the core gameplay is competent and Franklin’s humorous taunts are often effective, the thing about Sneaky Bears that really impresses are the aforementioned throwing mechanics.

Players have a holster on each hip, both offering an endless supply of guns. When they run out of bullets, players are encouraged to simply toss their guns aside and grab new ones instead of reloading. As a bonus, bears struck by thrown guns are stunned, stopping dead in their tracks.

The developers at WarDucks have done an amazing job of making all of this feel completely natural. Players press the move button on the controller to grab their guns and release it to let them go. Combine the letting go of the button with a natural throwing motion, and it’s the simplest thing in the world to make the guns go exactly where they’re intended. I have no idea why this has proved the most difficult hurdle for other developers to clamber over, but WarDucks should be applauded for making it look simple.

With just an hour of main game content and no online leaderboards to encourage replaying levels, Sneaky Bears is more of a minor diversion than anything else. It’s cute and funny, and just a little upsetting when stuffed bears start threatening each other with brutal murder. That throwing mechanic, though – I spent five minutes in the level select screen just enjoying the simple act of knocking things over with my tossed guns. The goal of VR is to make fantastic spaces feel more natural, and by solving this problem, the developers at WarDucks have taken the medium one step closer. Rating: 7 out of 10

Disclosures: This game is developed and published by WarDucks. It is currently available on PSVR. This copy of the game was obtained via publisher and reviewed on the PSVR. Approximately 1 hour of play was devoted to the single-player mode, and the game was completed. There are no multiplayer modes.

Parents: According to the ESRB, this game is rated Teen and contains Fantasy Violence, Mild Language, and Comic Mischief. It’s another one of those ‘old enough to VR, old enough to play’ situations. There’s a bit of essentially harmless swearing from the bears and some threatened mortal peril, but even the youngest teens should be fine with it.

Deaf & Hard of Hearing Gamers: Unusually for a VR title, you’ll be almost fine with this one. There are no key audio cues, and all the bears attack from a 180 degree arc in front of you, so you shouldn’t be unpleasantly surprised too often. There are no subtitles, though, so you’ll miss out on all of the story.