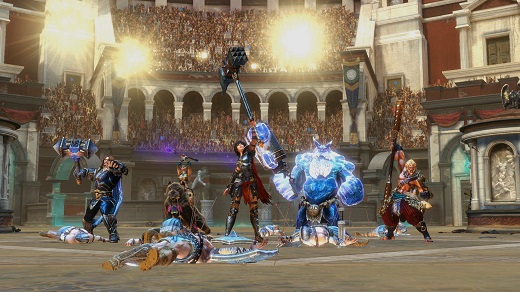 HIGH Tossing a frost giant into the air with an earthquake, then hammering him with a club as he landed.

LOW Having two thirds of my team quit because a match was going south. Not an uncommon occurrence, actually.

WTF A schoolgirl with serpents for legs? This is a very broad interpretation of the Scylla and Charybdis myth.

Seemingly unconcerned about its potential to insult literally millions of the devoutly religious, Smite has barged its way onto the XBO, giving players a chance to pit their favorite mythological figures against one another in vicious MOBA combat. It's a brutal arena of doom where ten gods enter, and ten gods leave. (The fights have essentially no stakes, what with everyone being immortal.)

I'll admit to being entirely new to the world of MOBAs—in fact, my only previous experience was with the Smite beta. On one hand, this leaves me without the vocabulary necessary to discuss the finer points of its design. On the other, I'm perfectly situated to engage with Smite exactly as its publisher hopes I will—as the first game in its genre to be released on Microsoft's console, I'm sure they're counting on plenty of new gamers jumping in for the first time, especially since it's free-to-play.

Other than a simple god vs. god arena mode, Smite's matches revolve around assisting regularly-spawning minions in destroying the opposing team's defensive structures. The ultimate goal is to clear the way to the boss monster whose death signals the end of the match.

There aren't many maps, but each one has its own distinct fantasy-based theme, and the main difference between them is how many 'lanes' there are. Six gods vie over a single route between home bases, for example, while the largest map will have five players on each side struggling to attack and defend over three different pathways, each one linked by a warren of alleys where dangers and bonuses are hidden.

Smite's main selling point is a wealth of gorgeously-designed and detailed characters, drawn from a wide variety of pantheons. The selection process is never too daunting, though, as they can all be broken down into either ranged or melee fighters, who are then divided into assault and support roles. No matter how bizarre the characters may seem at first, players will pick up the general rules for how they operate in just a few matches, and will quickly figure out which role suits them best.

In fact, Smite does a great job of making experimentation enjoyable since arena fights and small matches can be played in under twenty minutes, and so long as their team isn't being utterly routed, even clueless players will get a chance to level up their chosen god until they've got a good sense of how the various powers work. However, in spite of this starting leniency it's ironic that the one place Smite falters is in how little handholding it does for newcomers.

There's a tutorial designed to familiarize players with the controls and how matches operate, but beyond that players are completely on their own. Individual characters don't have in-game guides, nor is there info on the various types of powers. A lot of this information has to be learned by trial and error, but the deeper parts of the game—which gods work better when teamed, how to employ complimentary powers—can be completely obscure until players find themselves utterly clobbered by opponents who know what they're doing. In light of this issue, it's too bad Smite's matching system doesn't give players the option of playing with others at their own skill level.

(PROTIP: When starting a match, look for the logo indicating whether an opponent is on the Xbox or PC. PC players have been at the game for a while and know how to shut down newbies with disturbing speed.)

Luckily, there's a robust online community devoted to Smite, and I was able to find plenty of helpful tips on how to survive my first few hours with dignity intact. That said, I don't think players should have to resort to going online for information like this, and it seems like a painfully obvious oversight on the part of the developers. They must be aware that this is going to be the first MOBA that many of their potential audience will come across, and they should have done more to introduce the integral concepts.

That lack of basic info aside, Smite is bright, largely accessible, and after just a few matches I fully understood the appeal of team-based god-on-god combat. While I don't know if it's managed to sell me on the MOBA genre as a whole, I didn't have more than a handful of bad experiences during my entire time playing—and those were mostly down to my teammates' understandable assumption that I should know what I'm doing before attempting a full game of conquest. Still, if a few shrill curses are the price of a wholly new experience, then that seems like a good deal to me. Rating: 8 out of 10


Disclosures: This game was obtained via publisher and reviewed on the Xbox One. Approximately 15 hours of play was devoted to multiplayer modes.

Parents: According to the ESRB, this game contains violence, blood, partial nudity, use of alcohol. This game consists entirely of combat between gods, so please look at it closely to see whether it's going to offend any of your sensibilities. Especially given that the various gods are depicted as extremely drunk, violent, and sexy. Not that any of those depictions are ahistorical, mind you.

Deaf & Hard of Hearing: You should be fine—there's no story or important dialogue, and audio cues are kept to a minimum.