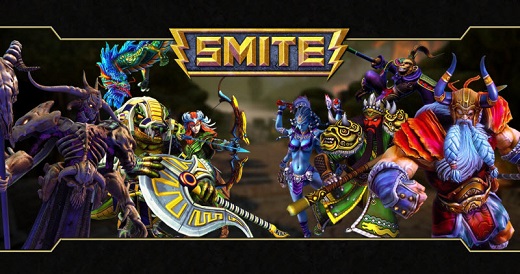 The gods are angry with one another. I'm not entirely sure why, as the new-on-Xbox MOBA Smite doesn't have even the slightest shade of anything resembling a 'story', but they seem very set on very temporarily killing one another in what may well be their divine equivalent of Polo. Smite allows players to choose their  character from a wide variety of mythic pantheons, with Greek and Roman gods hobnobbing with dieties from Norse and Mayan mythology. While eventually leagues and clans may rise up designed to pit the various faiths against one another, for now, in its Beta state, Smite is a pantheological, with a group of 3-5 random monsters (always 2 more characters than the number of lanes on a map) pitting their skills against equal number of strange bedfellows on the other team. The teams, coloured blue and orange, are dubbed 'order and chaos' respectively, which sounds deep, but I'm fairly sure has nothing to do with which gods wound up on which team. Unless a giant evil werewolf has somehow become synonymous with the establishment while I wasn't looking.

Just how these mythological figures are turned into 'capture the base' combatants is the game's main point of artistic interest. The levels themselves are perfectly serviceable, leaning heavily towards a bland generic fantasy aesthetic. Far more interesting are the gods themselves, who manage to impress with sheer variety. While all are rendered in the same basically realistic style, e.g. all are human-sized, and the vast majority are human-shaped, the developers have managed to use colour and design choices to make sure that each of the different pantheons have a distinct look to them. Quite an impressive feat, especially considering the sheer volume of characters in the game. The characters are sectioned off into the standard roles, melee and long range fighters, support-focused spellcasters and sneaky assassins, with enough characters falling into each category that players will be spoiled for choice. 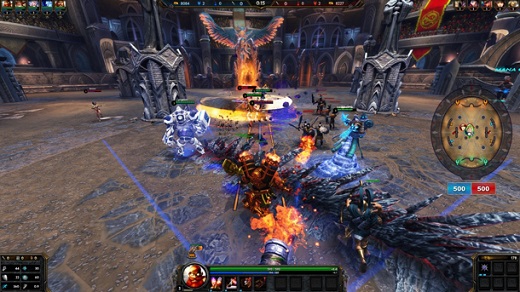 I can't say that the game is very friendly to newcomers at the moment. While there is a tutorial designed to get them up to speed, and a co-op mode to allow them to practice teamwork, they touch on few of the game's intricacies. While players are earning experience killing other gods and exterminating their minions they also accumulate gold which is used to purchase character upgrades and consumable items. Character upgrading defaults to 'auto-buy' allowing the program to prioritize how a particular god should improve, and while this is helpful for first-timers like myself, the game doesn't both explaining why it's buying things, or how they're going to help transform my god from a meek multi-armed bee thing into something to be feared. If players want to improve they'll have to either try hundreds of different combinations through trial and error, or go to the internet where PC players have done the work for them and created FAQs for every build. Neither is a great option when the game should be helping people learn.

Right now the community is also a bit of a mess – the field is made up of Xbox One people trying the game for the first time and veteran PC players who are frustrated that there aren't ranking and league functions yet. My game experience was heavily influenced by which group I ended playing with. Sometimes I would spend fifteen minutes battling alongside equally fresh players and it would be a entertaining and educational experience, but other times I would be brutally hammered by experts while my team sent me harassing messages, insulting me because I didn't already know this brand-new-still-in-beta-game like the back of my hand.

Smite looks great and its wide array of playable gods should give newcomers plenty of reason to give it a try, since they're bound to find something that can fit their playstyle. Hopefully the developers make some changes – more comprehensive tutorials, a walled-off beginners area – to keep them from being scared off by those who've been playing the game for years. I'm not entirely sure how the game is going to be monetized – my review copy had all of the gods pre-unlocked, but from what I can tell, all of the characters can be purchased with either in-game or premium currency, while new costumes and voices for the characters are solely a premium concern. I'll be interested in seeing how the game develops as it moves from beta to release – if the developers can find a way to smooth out the learning curve, I could definitely see myself taking my bee-monster off blocks and coming back for a few more rounds of Smiting.