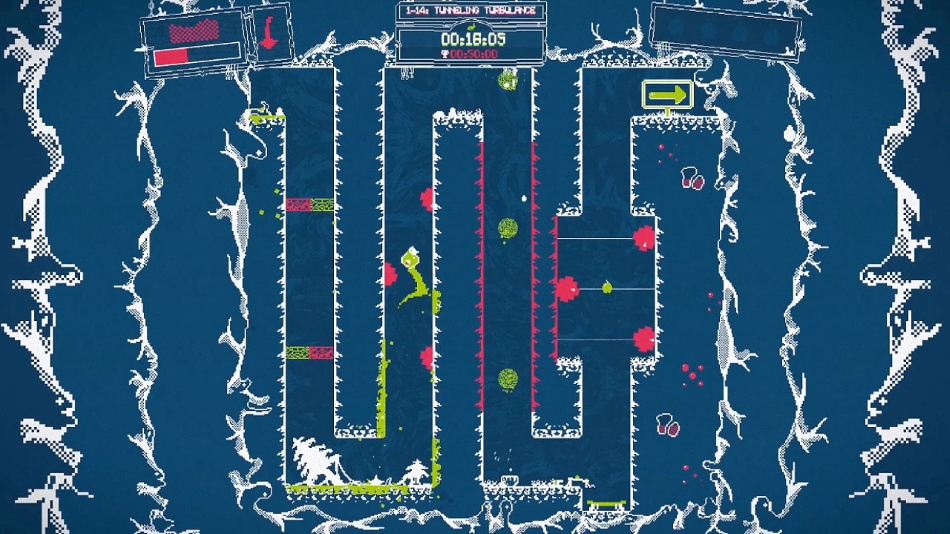 When one is looking for inspiration, it’s always a good idea to aim as high as possible. Whether or not one manages to equal (or even surpass) the piece of art that served as impetus, simply having something amazing to aspire to can lead to great things, especially when developers take bold new directions rather than simply copying everything that worked in the original.

Slime-San is a perfect example of what can be accomplished when developers are shameless about taking a fantastic set of mechanics and building something entirely new upon a perfect skeleton. In this case, the donor is one of the best platformers ever made – Super Meat Boy.

SMB’s DNA is impossible to miss in Slime-San —  levels are designed to be zipped through in seconds, deadly buzzsaws fly around inopportune places, colored trails are left behind on every surface the hero touches, the satisfying THUNK with which the amorphous blob lands after a long jump… All of this and more have been pulled straight out of SMB and dropped inside the body of the giant worm in which the game is set.

On one level, it’s wonderful just to be able to play new SMB-style levels. That game came out a long time ago, and nothing has managed to capture its feel until now. More importantly, Slime-San manages to create an identity completely separate from its inspiration, offering an entertaining world full of bizarre creatures, as well as a whole host of new mechanics to learn and master.

Of all the new ideas, the most important is the ‘shift’ button, which allows the titular blob to slide through certain materials in order to navigate tightly-packed levels. The button serves a second, even more important purpose, however – it slows down time when it’s being used.

This one single design decision has opened up the sadistic platformer genre to a much bigger market than it’s ever reached before because the slow-time acts as a helping hand for players who long to dance their way through peril but don’t feel their reflexes are up to the challenge. It’s also completely optional and the game tracks when slo-mo is being used, but as a set of training wheels to ease people into the world of sadistic platforming, it’s a godsend that’s incalculably valuable.

With its captivating garish color scheme and bizarre world, Slime-San was always going to be worth a look. The fact that the gameplay absolutely delivers an accessible and replayable platforming experience turns what could have been just a compelling oddity into a must-play for platforming fans or anyone who wants their reflexes tested in a severe (but never unfair!) way.

If you’d like to see video of my first half-hour with the game, you can check it out below!