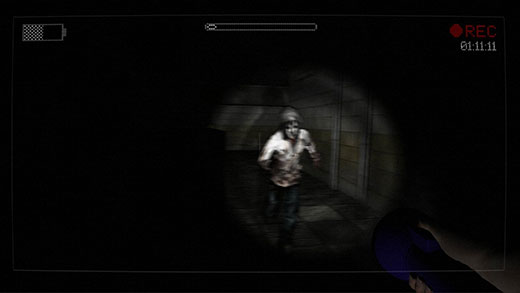 LOW Slenderman's powers in action look like a Windows 95 screensaver.

WTF No, it makes perfect sense to investigate a spooky burned-down farm at dusk without bringing a flashlight. Absolutely.

I played through Slender two times, which seems only fair considering its brevity.
The first time I played in the most ideal circumstances possible—at night, in an unlit room, wearing headphones… the complete horror experience. At the end of the game, I was awarded the 'speedrunner' achievement for completing it in less than 45 minutes.
This wasn't a complete surprise – I'd been unnerved enough that I found myself sprinting from objective to objective, hoping to stay one step ahead of Slenderman and his zombie sidekick. Worried that I'd missed a good amount of content in my hurried approach, I went back the next day, this time playing in a bright room with the sound turned off, and found almost no game to speak of.
Slender is a first-person adventure in which the player, often constrained by tight timelines, is asked to find a missing friend by searching through the woods behind their house. In practice, the game feels more like a virtual haunted house than an adventure, with the majority of its levels eschewing investigation in favor of sending players down narrow proscribed paths where jump scares lurk behind every third corner.
It all gets off to a promising start with a quiet walk down a dirt road. With a soundtrack consisting of rustling leaves and heavy footfalls, the game manages to capture a feeling of isolation and loneliness.
Finally getting to the friend's house was a genuine relief, which quickly turned sinister when the significance of its trashed state became clear. Unfortunately, the relatable situation of having a friend is in trouble and checking on them is quickly replaced with arbitrary video game conventions. Walk down this path because that's where someone set up work lights for some reason. Wander through a park looking for pages of paper that offer no new information—the game doesn't even attempt to provide motivation for the player's actions beyond a checklist on an objective screen.
This questionable game design reaches its nadir in a flashback sequence where the player controls a child who disappeared years earlier. It opens with the little one being called away from the beach, but the borders of the game's world immediately exert themselves and kept me from going where I was called. It took me a moment to realize that the devs wanted me to head further and further down the beach instead, picking up toys until the breadcrumb trail led me to being lost in some woods. This is terrible game design—players should want to move forward through a game's story, not have to be corralled into it.
To Slender's credit, things actually do improve quite a bit in the second half. The level design is still hugely restrictive, but it becomes less of an issue as the pacing picks up, with the player rushing from location to location, gradually realizing that they're powerless in the face of an ancient, incomprehensible force. The developers have also managed to put together a good variety of lore items to pick up and read through. There's just enough to suggest the origins of everything happening without ever making anything explicit.
With a few effective scares and hints of an interesting story, Slender: The Arrival is the kind of experience that anyone looking to juice their heartrate for half an hour should seek out. After the shock has worn off, though, the game has nothing left to offer. With no depth to speak of, there's just no reason to go back for a second trip into the dark woods. Any virtual thrill-seekers should think about what a few chills are worth, because even for a small downloadable title, Slender is short on value. Rating: 6 out of 10

Disclosures: This game was obtained via publisher and reviewed on the Xbox 360. Approximately 2 hours of play was devoted to single-player modes (completed 2 times).

Parents: According to the ESRB, this game contains blood, violence. This can get a little intense at times, especially if played in the correct environment. Yes, there's nothing that pushes the game into Mature territory, you really don't want younger, more impressionable teens having nightmares. Or, you know, starting a murder cult.

Deaf & Hard of Hearing: Don't bother with this one. The vast majority of the game's effectiveness comes from the excellent way the developers have crafted the sound design. Played without sound, it's really more boring than anything else.