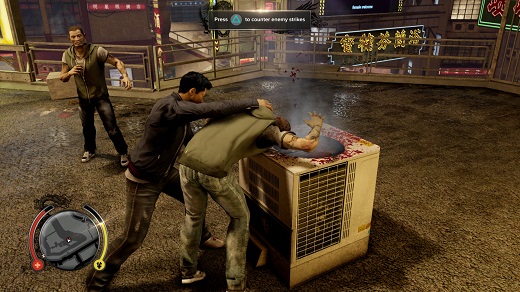 HIGH Killing Jiang Shi by attaching spells to their heads.

LOW Losing five hours of progress to a glitchy save file.

WTF There's an achievement for beating someone up with a fish.

'Don't turn off your console while the autosave icon is onscreen'—an instruction which, in some form or another, has become ubiquitous in the world of hard drive-equipped consoles. But what happens when the autosave icon never disappears?

This is the dilemma that Sleeping Dogs, in its worst, buggiest moments, poses.

The Definitive Edition of Sleeping Dogs should have provided players with the opportunity to race through the four districts of its virtual Hong Kong with a smoother framerate and cleaned-up textures. Not an overly-ambitious goal by any means, but it could've been a minor success. Instead of a more polished product, I was startled to find that each of the modes in the Definitive Edition manages to be glitchy in its own distinct way.

The main game's bug is by far the most severe—when the autosave symbol refuses to disappear, it's a sign that the file has broken, and any attempt to manually save the game will cause everything to lock up. Accustomed to saving only at the end of gaming sessions, the first time I encountered this bug, it cost me five hours of progress. I quickly developed a workaround of saving after every mission or unlockable. While this doesn't sound like a lot of work, the game has a truly stunning number of activities to perform and tchotchkes to find, so anyone hoping to see all of Hong Kong can expect to spend a significant chunk of time on the save/load screen.

The game's other bugs are generally less severe, but still frustrating.

The Year of the Dragon in an add-on that sets main character Wei Shen against an army of doomsday cultists. It's a light three hours focusing more on law enforcement than the main game's inter-gang conflicts. Armed with handcuffs and a stun gun, players are now expected to end fights with arrests rather than brutal beatings or headshots. Also, the local fish populations may never recover after the sheer number of car bombs players are asked to dispose of in the harbor. The missions have a nice variety to them and the story wraps well, but achievement hunters will be frustrated to discover that the developers neglected to make collectibles visible on the game's map once the expansion is completed—a feature every other game mode offers. This turns things into a frustrating slog for full completion.

The Zodiac Tournament is a playable version of the Bruce Lee film Enter the Dragon, and an entertaining venue for more of the game's Batman-inspired combat. It offers a decent variety of objectives as well as new fighting styles to unlock. For some reason, though, all of its cut-scenes are completely unskippable, creating a barrier of annoyance for anyone interested in replaying a few of the fights. The bonus side missions (in which the player can unlock an undercover supercar) have perhaps the most bizarre bug of all: sometimes while playing them, the game would crash with absolutely no warning, kicking me completely out of the game and back to the Xbox One's menu screen.

The only mode to feel completely finished is Nightmare in North Point, which pits the player against an army of hopping vampires and a few resurrected faces from the main storyline. By far the game's best expansion, not only does it introduce creepy new supernatural foes, the distancing effect of the supernatural setting allows the story to discuss the consequences of violence and long-term effects of the Mafia lifestyle in a way the main story never attempts to.

In its initial release, Sleeping Dogs suffered from being released close to the end of the last console cycle. It came out late enough that anyone could be forgiven for wondering whether its technical shortcomings were the result of an ambitious title pushing the limits of aging technology, or whether it was simply a case of extremely sloppy coding. If nothing else, this special edition has provided a definitive answer to that question—it was both. Rating: 7 out of 10


Disclosures: This game was obtained via publisher and reviewed on the Xbox One. Approximately 20 hours of play was devoted to single-player modes, and the game was completed.