Impalement Is Rarely This Good 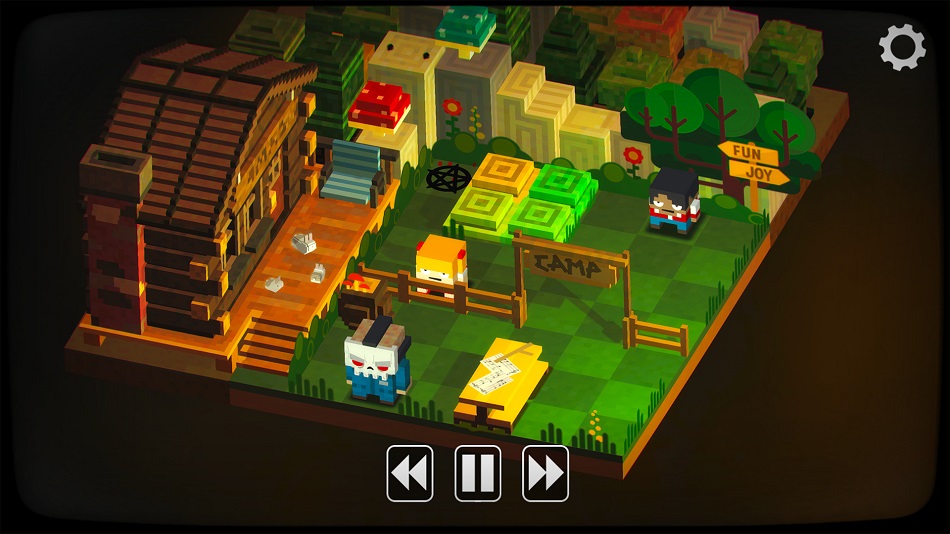 LOW The feeling of spending 100 coins to unlock a puzzle solution that was completely obvious in retrospect.

The only thing Slayaway Camp offers is… sliding floor puzzles.

To be fair, there’s a huge assortment – a glut, really – of these puzzles in which the player can move in four directions, and starting a movement will carry them on until they reach an obstruction. Once they stop, they can choose another direction until they eventually reach their goal. It’s a classic sort of puzzle that shows up frequently.

So, there are lots of puzzles and they’re all well-made. That alone would make this game worth a look, but what elevates it to a must-play is the setting — it’s a loving tribute to the slasher-film canon of the 70s and 80s, acted out by adorable block people who come to all manner of nasty ends.

In support of this theme, Slayaway Camp has one of the best-designed menus I’ve ever seen. The player is presented with a set of video racks, each one dotted with tapes representing packs of levels. Each group of levels is presented as a ‘film’ with a consistent setting. They start out at a summer camp for some Friday the 13th-style action, but the references quickly pile on as more and locations and killers are unlocked, taking players on a virtual tour of the history of the slasher film. 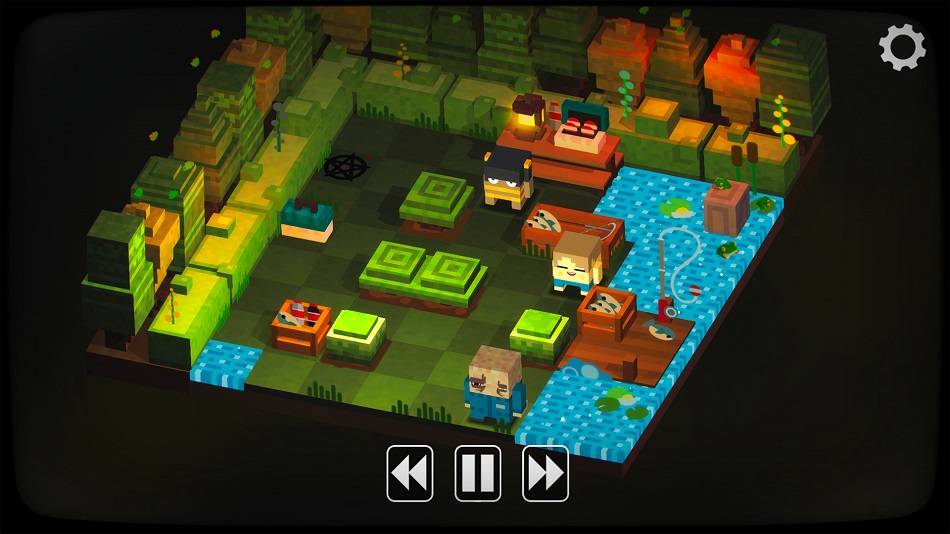 In each section, the player is presented with a number of innocent victims to slaughter in order to unlock the pentagram that will whisk them to the next level. They can be killed either by sending the killer sliding into them (which plays one of the game’s truly impressive number of murder cutscenes) or by scaring them into one of the game’s many traps.

The executions of either flavor are brutal and frequent, and surprisingly adorable. The developers have found a sweet spot of cartoonish inhumanity in their squat, boxy character designs so that no matter what horrible indignities are heaped upon them (and there are some surprisingly vicious deaths) it feels safe to laugh at the bloodshed, rather than be disturbed by it. It is an incredible accomplishment in transforming the vile into the playful.

Slayaway Camp has more to offer than a great sense of humor and an encyclopedic knowledge of slasher films, though. The puzzles themselves are ingeniously constructed, and each new ‘movie’ introduces a new set of complicating mechanics – cats that mustn’t be killed, cops that can stop the killers in their tracks, phones that can attract or repel various characters, and so on. These are some of the most complex and layered sliding-floor puzzles I’ve come across, but luckily, the game has one of the best hint systems around — players can spend in-game coins earned by completing levels and succeeding at a minigame for a substantive hint, or even outright unlocking the solution if they’re getting too frustrated.

With its cheerful gore and wholehearted embrace of adorable violence, Slayaway Camp toes a line that has tripped up many developers before them. (Anyone remember the tonal disaster that was Naughty Bear?) This is both an ingeniously-built puzzle game and a horror extravaganza rolled into one, and it’s a combination that must be seen to be believed. Horror fans will enjoy great comedy writing about a subject they love, puzzle fans will have their brains expertly teased, and fans of both will find the game of their dreams. Rating: 9 out of 10

Disclosures: This game is developed and published by Blue Wizard Digital. It is currently available on PC and IOS. This copy of the game was obtained via publisher and reviewed on PC. Approximately 6 hours of play were devoted to the single-player mode, and the game was not completed (yet!). There are no multiplayer modes.

Parents: According to the ESRB, this game is rated M and contains violence, blood and gore, suggestive themes, and drug reference. As cute as this game might be, it’s still themed around slasher films and depicts a wide variety of unpleasant acts happening to drunk and sexy people. Not for kids, in the least. Also, for the squeamish adults, there’s a ‘low gore’ mode that leaves out most of the violence to focus on the puzzling.

Deaf & Hard of Hearing Gamers: It’s a sliding block puzzle game — there are no audio cues necessary for successful gameplay, and the cutscenes are subtitled.