The Continuing Adventures Of The Triangle From Asteroids 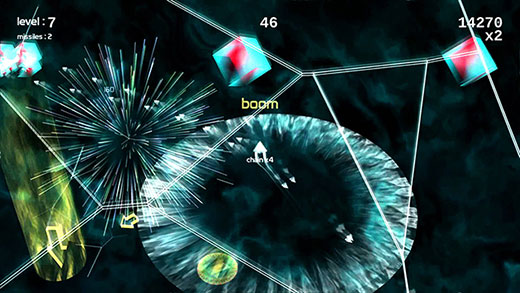 LOW Dropping from one level to the next, and landing on a game-ending foe.

WTF Is there seriously no way I can turn off those annoying backgrounds?

Geometry Wars was important for the Xbox 360. As a retro twin-stick shooter, the simple graphics, deceptively deep gameplay and short sessions made it a perfect pick-up-and-play title, showing that Microsoft could deliver something besides first-person shooters and racing games. Sixty Second Shooter Prime could have served the same purpose for the Xbox One—a platform shockingly light on indie offerings at the moment—but a series of bizarre design choices keep it from being a high-level experience.

The game's title comes from the length of a session. Players are given one minute to get as deep as they can into a space dungeon, dodging and killing enemies as a techno track thumps away in the background. Power-ups can be used to slow time, set off screen-clearing explosions, or transform the player's ship into an invincible battering ram for a brief interval.

The game pops as the player gets into the lower levels, offering quick bursts of adrenaline when huge chain reactions of explosions are created, and the player revels in the slow-mo chaos. Even better, Shooter Prime's bombastic streak is well-represented when delving further into the dungeon. Instead of flying or teleporting down to the next zone, the glass floor shatters, sending everything—player, enemies, and power-ups alike—crashing below.

Unfortunately, it's in the drive for more chaos that the developers let their art style get away from them, to the game's detriment. To create a sense of immediate tension, the developers have placed the camera very close to the action, never showing more than 20% of the field at any time. Not only does this decision fly in the face of the shooter tradition, it makes playing the game unfair. Without the ability to see the whole board at once, players will constantly be killed by fast-moving enemies or bullets coming in from off-screen.

Worse, racking up huge scores is only possible by getting 'chain reactions' going. These chains are when the player constantly kills enemies in order to maintain a state of explosive slow-mo for as long as possible. The tight camera angle means that players can't tell where new enemies are spawning, so their ability to keep a combo going is based entirely on luck and guesswork. It's incredibly unsatisfying.

Worst of all, sometimes enemies just aren't visible. The game comes with a few different 'themes' that change the game's appearance, except for invincible foes who are always transparent red. Unfortunately, this red is essentially invisible on two of the backgrounds. Then there are the bombs, which destroy everything but enemy bullets. These bombs also create streaks of blinding light that completely conceal the whereabouts of those bullets, making them impossible to dodge. Whether that was a conscious choice by the developers or a simple mistake, I can't imagine how it escaped testing intact.

I enjoyed playing Sixty Second Shooter Prime well enough, but the fundamental unfairness of the design keeps it from being a great example of the genre. The whole point of the twin-stick shooter is to test the skill and reflexes of players, so adding random chance and hiding gameplay elements means that they'll frequently be killed through no fault of their own. This unfairness is the difference between the educational kind of frustration that drives players to get better, and the furious frustration that makes them to throw a controller. Sixty Second Shooter is on the wrong side of that line, and that's what keeps it from greater success. Rating: 6.5 out of 10


Disclosures: This game was obtained via publisher and reviewed on the Xbox One. Approximately 2 hours of play was devoted to single-player modes (completed many times). There are no multiplayer modes

Parents: According to the ESRB, this game contains mild violence. You will be fine with kids playing this—it's triangles shooting pixels at squares. It's literally the least violent thing you can have while still having to put a 'violence' warning on the ESRB card.

Deaf & Hard of Hearing: Being able to hear enemy spawns can help a little, but once things get chaotic, the sound gets lost in the din. D/HH folks won't really be at much of a disadvantage. It's just another one of the game's problems that could have been solved by putting the whole field onscreen at once.