Theatre of the Damned 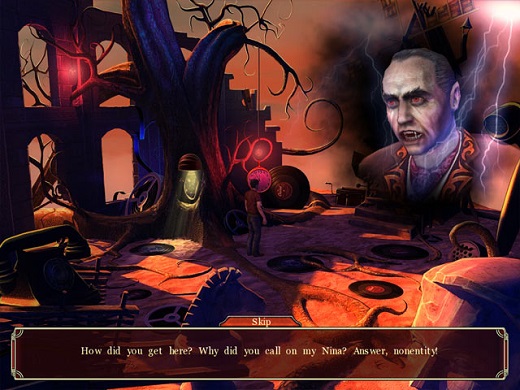 HIGH "Oh, you need to talk to your kidnapped fiancée? Help me fix my hypnosis machine so you can use the astral plane!"

LOW A few bugs caused me to quit the game and reload.

WTF "Hi, I'm the director of the game you're a character in. Could you help me find my storyboards so I can tell you where to go next?"

Sinister City is perhaps the strangest hidden object game I've ever had to review, if only because I have to be careful not to ruin the surprises that make it such a special experience. I've come across plenty of HOGs whose plots can be spoiled, but Sinister City's reveal is about exactly what kind of game it is, and to explain in too much detail would kill the surprise.

The game begins on the outskirts of Sinister City, a bustling metropolis where vampires rule the everlasting night. Nina, the main character's fiancee, has been kidnapped by an ancient and powerful vampire, and he's come to town to rescue her or die trying. What follows is an adventure whose trials are completely unexpected, whose characters are utterly off the wall, and whose style must be seen to be believed. Now, for the HOG criteria:

Criterion 1: To what degree do the puzzle screens look like a thrift store vomited on my monitor?

Not as bad as it could have been. Whether John is searching through a hotel's back room, a castle's armory, or the studio where a vampire-themed children's show is filmed, there's always a plausible amount of clutter obscuring the items he's tasked with finding. The items sometimes stretch believability a little, but the game never cheats by vastly changing the size of items to make them more difficult to find. Also impressive is the amount of layering that goes into the screens—a few of them must be revisited more than once during the adventure, and the developers are consistent in that key items required later in the story are always visible during earlier scenes.

Criterion 2: Are the searches justified by the premise/story?

Better than many other HOGs. Every time John is sent to a hidden object screen, it's for the express purpose of locating a set of items required by the plot. Sometimes that's all he has to look for, but at other times the developers use the standard list of arbitrary items which need to be cleared before the final item is revealed. This actually has the effect of partially justifying the gameplay within the story since John is ‘tidying up areas' by searching for the one thing he actually needs. That said, it's not as good as if they'd actually made every item somehow relevant, as the best games do.

Criterion 3: How well do the various puzzles and object searches meld together to form a coherent whole?

With the hidden object screens mostly plausible, the only thing that could have sunk Sinister City were bad puzzles, but even there the developers have turned in a solid performance by coming up with challenges that fit the world without ever feeling arbitrary. Sure, there's a jigsaw puzzle to solve, but it's built around assembling a broken map, so the logic tracks perfectly. There are likewise clocks to repair, generators to fix, and software to decrypt—but the puzzles always give the impression that the player is performing a relatively concrete task in the world. They're not the most difficult puzzles, but combined with the extremely solid hidden object screens, the result is coherent world, where the puzzles never pull players out of the story.

Sinister City starts with the most boilerplate setup imaginable, but refuses to follow the prescribed path. While the developers could have made a by-the-numbers vampire story, they've done something far more interesting, turning it on its head to creating one of the most delightfully absurd narratives I've seen in ages. From the game's first moments in which a character announces that the player is the director of the film they're going to be watching, right up until the end where outtakes from that film play, Sinister City is an always-startling delight. Besides being one of the strangest HOGs I've ever played, it's also one of the best. Rating: 8.5 out of 10


Disclosures: This game was obtained via paid download and reviewed on the PC. Approximately 3 hours of play were devoted to single-player modes, and the game was completed.

Parents: This game was not reviewed by the ESRB, but this game contains violent references. You should be completely fine with your kids playing this one. Despite the packaging, you won't find gruesome violence or disturbing subject matter anywhere inside. It's absolutely approved for their consumption.

Deaf & Hard of Hearing: You'll do great. No audio cues and all of the dialogue is subtitled.