Go Back To The Boom 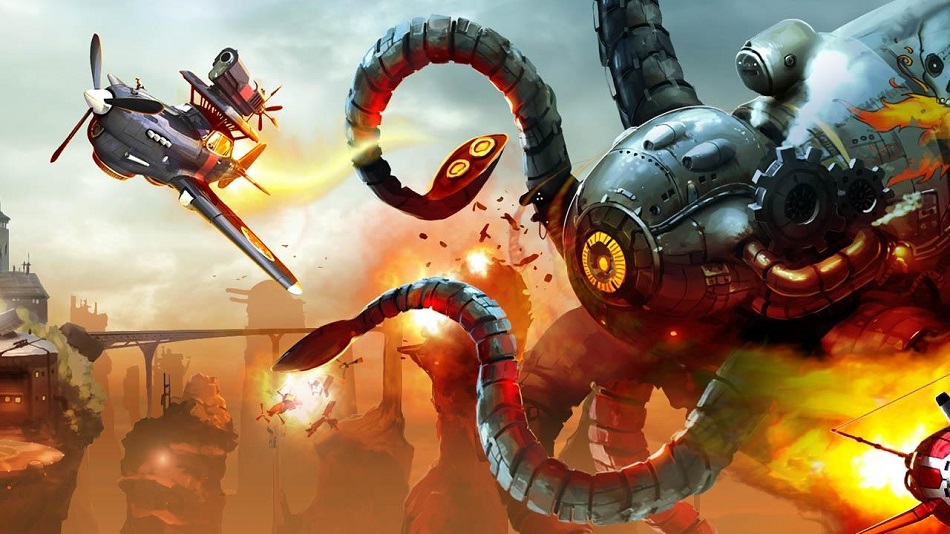 WTF Is that a giant robot mosquito?

Either I’ve been out of the loop on the artistic development of Shmups, or Sine Mora has an unusually large amount of plot for the genre. Juggling time travel and flashbacks with surprisingly dexterity, the devs jump around with an epic story of time travel, war, genocide, revenge, and, of course, shooting monstrously huge vehicles.

Appropriate for a game about attempting to fix the mistakes of the past, Sine Mora uses ‘time’ as a central mechanic, but does so in a fairly unimpressive way — a counter at the top of the screen is treated as a health pool that lowers when the player is hit and rises when enemies are destroyed. There’s also some slo-mo, which players can use to dodge their way through particularly intense enemy volleys. That’s it for time mechanics, though, which is a bit of a disappointment. Given the theme, why not let players rewind to avoid deaths, or perhaps fight alongside earlier versions of themselves? Something more inspired that really plays with with the concept of time travel would have been welcome.

While Sine Mora isn’t breaking any ground with its gameplay, it certainly has the fundamentals of the genre locked down tight. 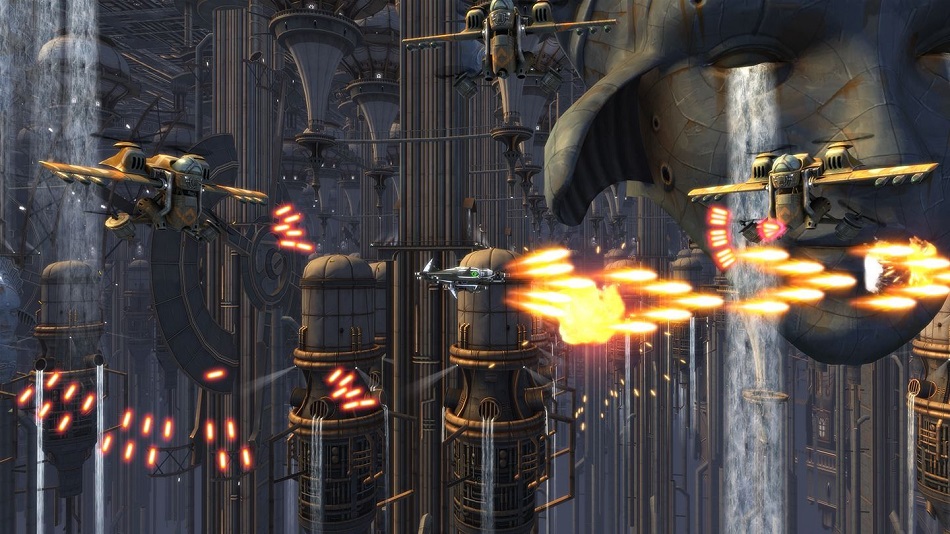 Players take control of a variety of fighters as they blast enemy ships along a 2D horizontal plane inside a lush 3D world. The developers have created huge, detailed worlds, and via some clever camerawork, they actually make it feel like the player’s ship is banking and weaving through cities, canyons, and factories while never actually departing the classic horizontal shooter structure. This visual trickery is especially impressive during boss fights, where the player will destroy all of the weaponry and weak points on one face before the camera swings into action, taking the player on a journey around the boss model to start shooting another side.

The core gameplay isn’t much different than it was back in the days of R-Type or Gradius, but the presentation raises it to a whole new level. Every stage has a unique look, from underwater caves and elaborate cloud-harvesting machinery, to a factory in full-swing production. All are fantastically designed, and each one comes with a boss that perfectly fits the location and poses its own unique challenge. At no point does it ever feel like the devs are rehashing content or phoning anything in – while Sine Mora only lasts around two hours, that time is well-spent with a constant stream of new and exciting experiences.

There’s a decent amount of replayability here as well. The difficulty levels change the gameplay enough that changing the setting can make it can feel like an entirely different game. Also, Sine Mora‘s co-op mode doesn’t just add a second ship, but instead puts the additional player in a support ship with completely different abilities designed to help out the first player. There’s also a challenge mode with a wide variety of clever activities based on the main game, like dodging elaborate waves of bullets, juggling objects with gunfire, targeting specific enemies in a crowd of ships – it all adds up to an extremely robust package.

Sine Mora EX looks amazing, plays like a dream, and has a story that will leave players feeling bad about themselves and the world. That third thing may not sound like a selling point, but it’s so strange that I couldn’t help but be impressed by the audacity the developers had to include it. Horizontal Shmups don’t come smoother or better-looking than this, so it’s an easy recommendation for anyone with an interest in the genre. Rating: 7 out of 10

Disclosures: This game is developed by Digital Reality, Grasshopper Manufacture, and Gyroscope and is published by THQ Nordic. It is currently available on PS4, XBO, Switch, and PC. This copy of the game was obtained via publisher and reviewed on the PS4. Approximately 3 hours of play were devoted to the single-player mode, and the game was completed. 1 hour of play was spent in multiplayer modes.

Parents: According to the ESRB, this game is rated M and contains Fantasy Violence, Sexual Themes, and Strong Language. Yes, it’s a game about furry animal people flying airships and blowing up robots, but it’s also pretty darn bleak. Constant swearing in the dialogue, a plot about genocide, oh, and one of the pilots is partially motivated by her status as the survivor of sexual assault. So yeah. No kids.

Deaf & Hard of Hearing Gamers: There are no audio cues of note, and all dialogue is subtitled! It’s fully accessible!