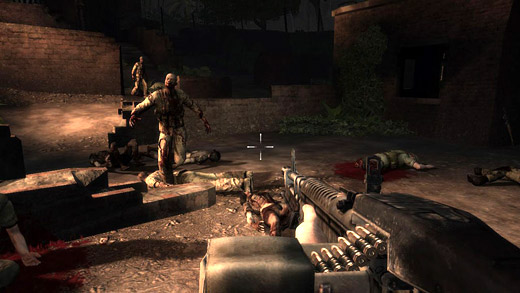 HIGH Finally a zombie game after Resident Evil 2 that acknowledges shooting them in the leg is a really good tactic.

LOW It's a Vietnam war game with absolutely nothing to say about the conflict other than that it happened.

WTF Okay, so you're turned into a zombie—I get putting on a gas mask and picking up two cleavers. Hey, who wouldn't? But how does that make you bulletproof?

If ever there was a game that required keeping an open mind when approaching, it was ShellShock 2: Blood Trails. As the sequel to the only mainstream game to have ever actually offended me, I was prepared for yet another blood-soaked journey through the exploitation of international tragedy. Imagine my surprise when I found myself a few levels into the game completely unoffended. Bored by the gameplay and frustrated by the stupidity, yes, but no longer offended.

A sequel in name only to the previous ShellShock title, Blood Trails eschews the third- person action of its predecessor for a more immediate depiction of shooting from a first-person perspective. The game tells the story of a special forces trooper who's tasked with communicating with his recently-captured brother, a former soldier who's been transformed into a frantic zombie. It seems that on his mission to kidnap a French bio-weapons specialist, the brother wound up infected with the very virus he was meant to secure, and now he's been reduced to little more than a thing whose faculties consist entirely of pulling at his restraints. Of course, things go wrong immediately as the NVA captures the army's secret lab and the main character's brother escapes, immediately starting to spread his infection throughout the area.

The hunt for said brother makes up the game's plot and provides an excuse to run the player through all the locations one would expect to see in a Vietnam-themed game. From the standard firebase under siege to a crumbling Buddhist temple to a warren of VC tunnels, all of the boxes are ticked off. It's not the lack of surprises in level selection that I'm objecting to, though, but rather the prehistoric manner in which those levels are designed. Narrow pathways, linear movement—at one point I came across a room where a partially-collapsed ceiling blocked access to the exit. I was forced to walk out a long narrow cave, fight my way through a space so cramped that it couldn't be called a "clearing", then back up another hallway into the other half of the collapsed room—all because my character couldn't climb over a two-foot high pile of rubble.

I understand the necessity of restricting a player's movements to control gameplay flow. Obviously every game can't be Assassin's Creed. I would, however, like developers to understand that there's a mental disconnect created whenever the game creates a situation where all logic suggests I should be able to go in a direction, yet somehow, I cannot—games are simply too high-tech now for players to accept nonsensical invisible walls in any game. Chain-link, razor wire, punji sticks—put a line of that anywhere and I fundamentally get that I'm not supposed to go in that direction. When I climbed out of a torture chamber and found myself in a small enemy encampment, the game gave me one option of where to go next: across a wooden walkway into another hut. How was I supposed to know this one narrow path was my only option? On either side of the walkway was a single rope, hung at waist level. I can blast hordes of zombies to pieces with a light machine gun, but somehow a ropeline proves undefeatable? There isn't even an imposing bodyguard in silvered sunglasses standing behind it with a clipboard. 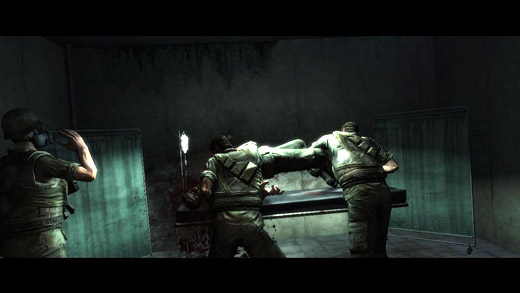 The restrictive, claustrophobic level design would be a huge problem in any event, but putting it in a zombie-themed game only serves to further compromise the game, this time in the area of difficulty level. Narrow hallways are fine when the opposition has some means of defending themselves from a distance, and the AI use cover to their advantage. Zombies, on the other hand, just have the one attack strategy—run straight at their victim and chow down. Left 4 Dead and the last two Resident Evils have shown that hordes of zombies attacking from all sides in open areas are an incredible threat. Three to four zombies sprinting down a hallway so narrow that it's essentially impossible to miss them are considerably less dangerous. Or scary.

On the other hand, this game is only half zombie-themed, with the player spending the rest of their time fighting NVA soldiers. Soldiers who, sadly, don't provide any more of a compelling threat than the zombies did. Progressive health and realistic enemy damage keep things moving along at a brisk pace, but the lack of a cover system keeps the combat from ever rising above the standard 'slide left, shoot, slide right, hide' shuffle that players have been doing for nearly twenty years now. Luckily these tactical limitations don't prove too trying, because the enemy AI never gets craftier than finding a direct line of sight to the player, standing still, and shooting. Actually, that's a little unfair—if the place they decide to shoot from is behind a low wall, occasionally they'll duck. The only decent part of the combat engine is a little QTE section that pops up whenever the player gets into a wrestling match with a hidden opponent. Of course, since these sequences are entirely scripted it's not really fair to call them part of the combat, but I will say that each one ends with such shocking brutality that I found them to be a disturbingly welcome respite from the rest of the game's ploddingly dull combat.

Exploding heads, severed limbs, and blood-soaked torture chambers aside, the game is essentially harmless. With no pretensions of presenting an even slightly realistic depiction of the war, Vietnam's role in the game is nothing more than as a backdrop—really, this could have taken place during any conflict at all. Since the game has absolutely nothing to say about war in general or Vietnam in particular, it's hard to take seriously, and impossible to be offended by. There are always arguments that can be made about whether it's a good idea to make an action game about a real war, since it risks trivializing the deaths of millions of people, but the events of this game have so little to do with the actual experience of anyone who fought in the war on either side that it ought to be no more insulting to veterans than Wolfenstein 3D.

I almost wish the game had been as nakedly offensive as its predecessor, that way I'd have at least been disgusted, and felt something other than tedium with the violent mediocrity the game had to offer. This minor disaster is a huge step down for the developers, Rebellion, after their fun-but-flawed Sniper Elite, and the "people-would-acknowledge-as-better-than-Gears-of-War-had-anyone-actually-played-it" Rogue Trooper. Rating: 3.0 out of 10.

Disclosures: This game was obtained via rental and reviewed on the Xbox 360. Approximately 10 hours of play was devoted to single-player modes (completed 2 times).

Parents: According to the ESRB, this game contains blood and gore, intense violence, strong language. As I mentioned in the review, this game features blood-soaked torture chambers. That alone should let you know to keep it far away from your kids. The salacious depiction of wartime prostitution has disappeared this time around, leaving things about as chaste as any other FPS.

Deaf & Hard of Hearing: You will have the normal FPS problems of not knowing about gunfire until it's hitting you, heightened by the fact that zombies often seem to jump out of nowhere in the darker levels if you can't hear their footsteps. All the important dialogue is subtitled though, and while it's clear enough where to go next in most situations, a mini-map would have helped in the rare open-concept levels.