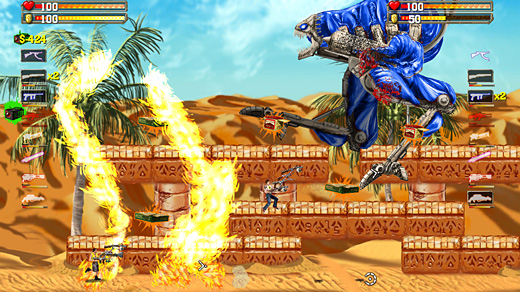 HIGH Eight lasers firing at once, annihilating everything onscreen.

LOW Where are my Golden Guns, MBG?

WTF This time around, I'm going to say… dynamite-powered unicycle.

Really, it seems like I could just link to my review of Serious Sam Double D—everything I wrote there remains true. This is an incredible game from beginning to end, and in its transfer from PC to Xbox Live (XBL) it's retained all of the exceptional action and level design of the original. To leave it at that, however, would be a disservice to the huge amount of work that Mommy's Best Games has put into expanding the title, make an already great game even better.

Serious Sam: Double D—XXL follows the same structure as its predecessor, with Sam being flung to three different time periods in order to stop a mad general from uniting the evil Mental's forces for nefarious purposes. Along the way he battles classic Serious Sam enemies like Gnarls and Biomechs, as well as new enemies such as mind-controlled dinosaurs and chimputees—which are exactly what they sound like: super-intelligent chimps with bionic arms and jetpacks. Via a combination of platforming and blasting away with half-a-dozen linked guns, the player is expected to kill their way through 20 levels of mayhem, either alone or with a co-op partner.

This co-op mode is the game's biggest new feature, allowing two players to hammer the hordes of enemies simultaneously, as well as resurrect each other when one dies. XXL does a great job of making co-op platforming as painless as possible by giving one player the opportunity to automatically catch up if they miss a jump that their partner landed—the jumping puzzles aren't especially difficult, but a couple of them do require good enough timing that asking two people to complete them simultaneously may have been a bit of a chore.

The only real downside to co-op gameplay is the way characters can get lost during truly large-scale encounters. As the camera pulls back to give each player a little breathing room, their characters can get small enough that—despite their differently-coloured outfits, it can be a little difficult to determine exactly who is firing huge salvos of missiles.

As well as the co-op modes, the developers have included some light deathmatching as a bonus feature—Sam and Huff (the second character) are dropped into one of a number of different trap-filled rooms, and given the chance to duke it out for supremacy. Like Spelunky's deathmatch mode it's pretty basic and a little tacked-on, but it's still a nice bonus feature. 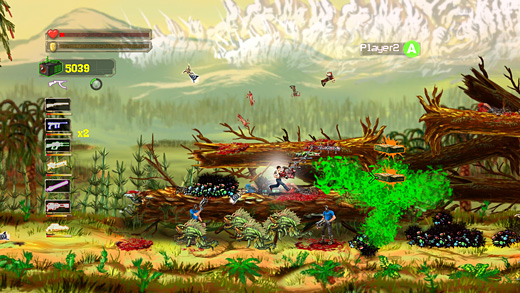 The other huge new developments are the upgrades the developers have made to the game's arsenal. Double D's addition of "gunstacking" seemed like the absolute most that could be done with the classic Serious Sam arsenal. Being able to use six weapons at once, in any combination the player chooses? What's going to be better than that?

XXL managed to blow me away again, this time offering five different variants of each of the game's firearms, for a total of 40 different weapons that can be bought and assembled in any way imaginable. There's a Tommy gun that fires turrets, a chainsaw that attracts money, a machine pistol that lets Sam hover while jumping—even a laser cannon that leeches health from opponents. In a nod to Serious Sam lore, even the famous cannon finally makes an appearance. While a few of the weapons are primarily support items, and useful only in co-op games, the vast majority of them are employable in any number of combat situations, and the variety in the arsenal encourages players to try the game's brief levels over and over again, experimenting with different combinations and techniques.

In addition to the co-op features and exploded arsenal, the game's levels have been expanded quite a bit. New exploration and puzzle sections have been added, beefing up the game's running time by challenging players to figure out how to climb ladders made out of missiles in mid-flight.

There are also three new vehicle-based levels, which vary wildly in quality. First a "powersled" level has wonky controls that never feel right, then Sam takes to the skies for a welcome nod to Panzer Dragoon, and finally things get madly inspired as he tries to ride a dynamite-powered unicycle through the heart of an active volcano. They may not be perfect, but the new levels manage to fit perfectly with the existing game's aesthetic, to the point where—vehicle levels aside—I would challenge anyone who hadn't played Double D to be able to pick out the new content.

Double D was one of 2012's most pleasant surprises, a budget-priced promotional title that managed the unthinkable and outdid the game it was designed to get people excited about. Normally I'd be in favour of leaving well enough alone, but Mommy's Best Games has taken everything that worked about Double D and built something even more spectacular on top of it. Anyone who missed this game on the PC have no excuse for not giving it a try, and fans who've played the original can be assured that there's enough new and wonderful things included that it's worth going back and taking a second look. Rating: 9.0 out of 10.


Disclosures: This game was obtained via publisher and reviewed on the Xbox 360. Approximately six hours of play was devoted to single-player modes (completed one time) and two hours of play in multiplayer modes.

Parents: According to the ESRB, this game contains blood and gore, strong violence, language. You should be a little wary with the game—there's blood and some salacious subject matter, but no excessive swearing or substance abuse to worry about. The violence is so over-the-top that it's hard to imagine anyone being upset by it, but if you're extremely squeamish, the game offers an unusually large number of visual replacements for the blood, from Mortal Kombat-style "sweat" to bouquets of donuts that are thrown whenever a bullet strikes home.

Deaf & Hard of Hearing: You'll be fine. There are no vital audio cues—even the headless kamikazes generally spawn on-screen, so you won't need their screams to warn you of their approach. While full voice-acting has been added to the plot, all dialogue still appears in text windows.