I Just Now Got the Title 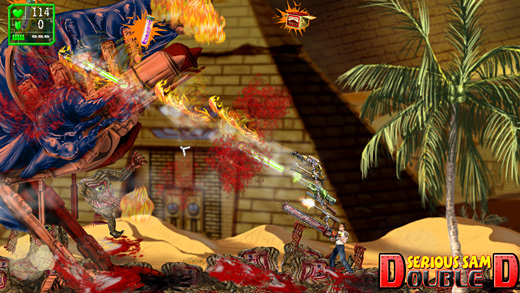 HIGH Gunstacking. There is no competition.

LOW Still looking for one.

WTF I have to pick one? Okay, then… femikazes!

Well, it seems like it's perfectly possible to make a great retro Contra-influenced shooter that balances laughs, playability, and a wide variety of settings, weapons, and enemies. If all Serious Sam: Double D accomplished was to humiliate the developers of Comic Jumper, that would be more than enough reason to recommend it. They went further, though—through a mixture of quick action, bizarre humor, and the greatest advancement in video game combat since bullet-time, Mommy's Best Games has delivered an exceptional game that raises the bar for 2D shooters.

Double D establishes its tone right off the bat, as Sam is dispatched back to Egypt for yet another battle with bad guy Mental's evil army. After discovering that market forces have transformed NETRISCA, the computer program who tells him where to go and who to shoot, into a busty holographic woman, Same and she team up to explain to the player that while it might seem monstrously unfair that powerful creatures constantly teleport directly in front of them, that's the way it's always been in the franchise, so it's absolutely not bad design when it happens here.

The tongue-in-cheekness of the game continues through the bizarre/hilarious creature designs (the standout: A fanged stack of pancakes with vuvuzelas jammed in haphazardly), and the running joke of the cut-scenes, which tell the story of the new villain's ill-fated attempts to introduce himself to all of the cannon-fodder he'll be commanding.

The transfer of the series's action into the second dimension is almost revelatory in its success. Nearly all of the franchise's weapons and villains have made the transition, and using platforms to dodge opponents is the natural 2D equivalent of the circle-strafing that previous games required when dealing with hordes of enemies. The levels are just as complex and secret-packed as ever, and the game adds a couple of new dynamics to help the player navigate them. In addition to a projectile jump pad (it catapults the player and enemies into the air when it's touched) body heaps play an important role in the proceedings. Corpses are remarkably persistent in Double D, and piling them high to escape a sticky situation or reach a secret never stops being a thrill.

The game's appearance doesn't disappoint, either. All three of the environments look impressive, although the initial Egyptian stages are less eye-catching than the jungles and volcanoes that make up the rest of the game's running time. The lush hand-drawn art that Mommy's Best Games is known for is on display, although the outlandish, impressionistic look has been dialed back. The developers were clearly tasked with creating a richly absurd world that Sam and company would still look at home in, and as I guided him through an airborne habitrail suspended over a prehistoric landscape, I've got to say, it felt like mission accomplished.

Of all of the game's strengths, the combat is the most incredible. I've played countless games where I guided a character by keyboard while plinking shots at monsters with the mouse, but never has it felt as monstrously satisfying as it does here thanks to the invention of "gunstacking". Likely inspired by either the Power Rangers or the Simpsons episode that parodied them, the game has Sam pick up metal connectors that join up to six guns together into a single "Supergun" that fires a wide variety of bullets, missiles, and flames at the same time.

With eight types of guns to use and a maximum of four each, the possibilities for combination, while not limitless, are more than ample to keep things interesting for the whole game. A simple interface makes building and swapping these guns a breeze, and in moments players can go from slaughtering hordes of enemies with four shotguns simultaneously to tearing a boss to pieces with a weapon that's equal parts laser cannon and rocket-launcher. The action in this game must be played to be believed.

With just eighteen levels, none more than five or ten minutes long, Double D could have been nothing more than a promotional trifle designed to get people excited about Serious Sam 3 but Mommy's Best has turned in a top-shelf product. The main game alone is more than worth the budget price, but there's also a series of challenge levels and a New Game Plus option that allows players to go back and find all the secrets they missed the first time around. The game even preserves the series's unlimited quicksave option, which both encourages gameplay exploration and ensures that players of any skill level will be able to make it through even the most difficult levels. Serious Sam: Double D is so good that I don't envy Sam 3's attempts to top it. Rating: 9.5 out of 10.


Disclosures: This game was obtained via publisher and reviewed on the PC. Approximately 6 hours of play was devoted to single-player modes (completed 2 times).

Parents: This game was not rated by the ESRB, but parents should be a little wary about it—there's blood and some salacious subject matter, but no swearing or substance abuse to worry about. The violence is so over-the-top that it's hard to imagine anyone being upset by it, but if you're extremely squeamish, the game offers an unusually large number of visual replacements for the blood, from Mortal Kombat-style "sweat" to bouquets of donuts that explode outwards whenever a bullet strikes home.

Deaf & Hard of Hearing: There are no vital audio cues, and what little plot is on display is entirely text-based.

It seems that many love or at least tolerate the art style, but my goodness, how can you stand looking at that game long enough to beat it even once?

I get that the gameplay rocks and I’m not a graphics whore, but every time I look at something from Mommy’s Best Games, I want to apologize to my eyeballs.