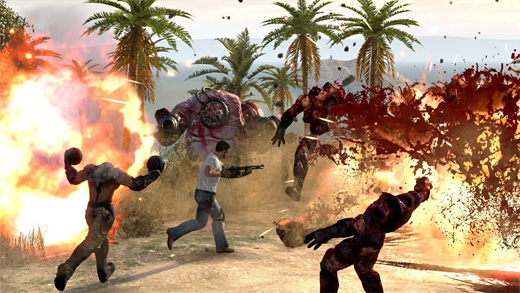 HIGH Finally I get my hands on a laser cannon!

LOW The whole first level is just a mess.

WTF It's official: Any super-sized enemy can be a boss.

After Serious Sam 3:BFE's bizarre mistake setting half the game in narrow, urban locations, my hopes were not high for the franchise going forwards. In apparent reaction to the lukewarm reviews, Croteam has now delivered Serious Sam 3: Jewel of the Nile

: a three-level expansion that tries to recreate some of the classic Serious Sam charm using their new engine. The player is taken through a wide variety of locations, reintroduced to a classic monster, and most importantly, the devs leave out most of what didn't work in Serious Sam 3.

The three levels vary wildly in quality. The first (centered on a small island) is simply a mess, asking the player to backtrack over and over again, picking up keys as new waves of enemies 'port in after each objective is completed. A nearly-identical level appeared in Serious Sam 3, and adding water around its borders doesn't magically improve its awful gameplay.

The second level is a huge improvement, offering some classic Serious Sam jumping puzzles after a brief (and thankfully non-labrynthine) jaunt through an urban area.

The final level in the pack is absolutely great, being a classically-designed area full of monster-packed canyons, jetpacking, and a boss that turns Sam's own tools against him while impressively leveling the scenery in the process.

At times, Jewel of the Nile seems like an outright apologia to series fans for mistakes made in Serious Sam 3. Weren't able to find a laser cannon in Serious Sam 3? Jewel hands the player one as a reward for beating the first level. Couldn't stand the cave monkeys or the teleporting bulletproof psychic siren? The second is gone from the game, and the first barely appears! To top it all off, there's ample ammunition for every weapon in each of the areas, ensuring that all but the most pointlessly wasteful players will have the freedom to tackle their opposition in any way they see fit.

Despite their earlier misstep, this expansion was clearly made by people who understand the appeal of Serious Sam, and cared about giving fans of the series what they expected. Serious Sam 3: Jewel of the Nile

goes a long way towards resurrecting the feel of the franchise that Serious Sam 3 was so sorely lacking, and I can only hope that this pack indicates that the developers have course-corrected, ensuring more bombastic and overwhelming Serious Sam games in years to come. Really, I'll be happy so long as I'm never asked to to sneak through another museum. That's Sly Cooper's job, not Sam Stone's. Rating: 7.5 out of 10.


Disclosures: This game was obtained via publisher and reviewed on the PC. Approximately four hours of play was devoted to single-player modes (completed one time).

Parents: The game is not rated by the ESRB, but contains blood and gore, language, violence, mature themes, partial nudity. Come on, don't even think about it. Exploding enemies at every turn, swearing, nude female enemies… this is everything you don't want your children playing in one handy package.

Deaf & Hard of Hearing: You will not be able to play this game. Full stop. The omnipresent Kamikazes and Bulls are only detectable by their approaching screams/hoofbeats, and if you don't know they're coming, they will destroy you. Even on the easiest difficulty level the lack of any visual cues to indicate off-screen attack imminence will prove a crippling, possibly insurmountable disadvantage.