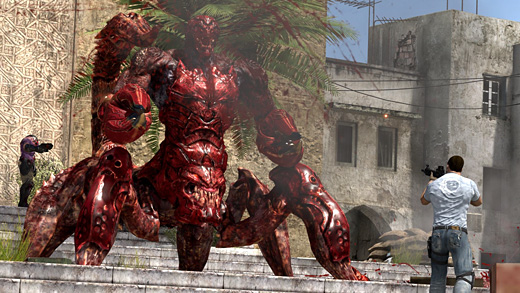 WTF Prepare to be mooned!

Serious Sam 3: BFE wears its primitive simplicity as a badge of honor. The game's tagline "No Cover, All Man" proudly announces the game's throwback status, as if designing a game requiring strategies that go beyond "backpedal quickly while shooting" is somehow an effeminate act. This boast is the entirety of the game's design philosophy—there is literally nothing complex or modern about BFE, other than its stellar graphics. This raises the question—are updated graphics enough to justify another trip into Serious country?

BFE's story is a complete wash, largely due to the fact that it's a prequel. While plot has never been the franchise's most important feature, up until now the games have been about Sam Stone traveling through the distant past, attempting to preemptively kill an alien named Mental who, prior to the events of the first game, destroyed the Earth. Although I can't be sure that there's anyone out there clamoring to see that storyline resolved, I'm certain that no one was asking to see the events directly Before the First Encounter, telling the story of how Sam got to the time machine he used to set up the rest of the series. The only purpose that the utterly inessential story serves is to set up the game's locales, namely war-torn Cairo and ruined, near-future versions of locales familiar to fans of the series.

This choice in locales is an unmitigated disaster. The second half of the game is at least an understandable mistake—clearly the developers thought that players would want to see some classic environments, but they don't seem to realize just how tedious this gets over a long series of similar levels. Whether the stone is new or weathered, Sam is still running around Egypt, blowing up Kamikazes and Harpies, making BFE feel more like a hi-res remake than a prequel. To be fair, though, at least the classic levels play well—which can't be said for the Cairo half of the game.

By putting Sam in what is—geographic specificity aside—a war-torn Middle Eastern city, the developers have ensured that half their game is visually indistinguishable from 60% of the FPSs on the market. Even worse, the entire fast-and-loose gameplay concept Sam is built on doesn't work in rubble-strewn alleyways and half-collapsed buildings. The ruins of Ancient Egypt are rocket-resistant; for the first four hours or so there's always an indestructible wall to duck behind for a breather, which kills whatever momentum the game tries to build. There's a similarly mixed bag when it comes to the weapons and enemies. 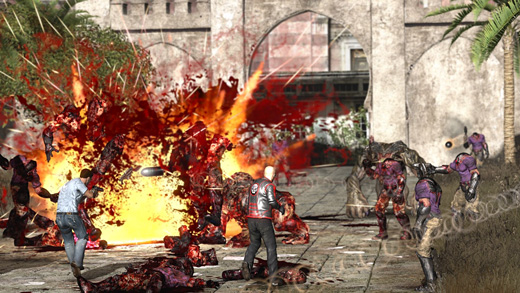 For the most part the classics work well, and some of the new additions, including a laser lasso and long-range explosive shotgun, are great. On the other hand, a number of weapons need to be reloaded far too regularly. A continuous fire rate was one of the key elements that defined Serious Sam's breakneck pace, and now I'm stuck swapping clips every five seconds? Did I miss Tom Clancy's name in the credits somewhere?

Equally mixed are the enemies—I especially liked a cameo by some of the demons from Doom, but for every step forward there's a leap backwards. In this case, the disastrous choice is a villain who's bulletproof most of the time, appears and disappears anywhere, at a whim, and can psychically freeze Sam and lift him into the air, rendering him a sitting duck for all other massed foes. If this was just one unbalanced boss it might be forgivable, but this foe turns up again and again, forcing the player to hide in nooks where they won't be incapacitated. Here's a tip, developers—if you've included an enemy that forces players to use the cover that you disdain, it might be time to return to the drawing board.

At least the multiplayer and bonus features live up to the series's standards. Playing with a group can go a long way to overcoming many of the campaign's flaws, and the survival mode is truly something special. Large maps with weapons everywhere and functionally limitless foes leads to the exact kind of chaotic mess I was hoping for from an Serious Sam game. My only complaint was that the mode is—at publishing time—restricted to just two maps. I wouldn't be at all surprised to see this stellar mode expanded with some DLC in the near future.

Is Serious Sam still relevant? The promotional Indie games leading up to BFE's release go a long way towards suggesting that there's plenty of life left in the franchise—I only wish that this game had made as compelling an argument. While the gameplay mechanics are a blast, the level designs are so questionable as to make me wonder about Croteam's reasoning. If they wanted to do something different, that's fine, but the game is one big half-measure. They want to keep the "classic" gameplay, but then set the game in locales that don't suit it in the least, resulting in a giant mess. Hopefully next time around they'll pick an angle and have the dedication to be consistent with it. Rating: 5.5 out of 10.


Disclosures: This game was obtained via publisher and reviewed on the PC. Approximately 10 hours of play was devoted to single-player modes (completed 1 times) and 2 hours of play in multiplayer modes.

Parents: According to the ESRB, this game is not listed on their website. Come on, don't even think about it. Exploding enemies at every turn, swearing, nude female enemies… this is everything you don't want your children playing in one handy package.

Deaf & Hard of Hearing: You will not be able to play this game. Full stop. The omnipresent Kamikazes and Bulls are only detectable by way of their screams and thundering hoofbeats, respectively, and if you don't know they're coming, they will destroy you. Even on the easiest difficulty level, where the game essentially plays itself, I don't see this thing being winnable without being able to hear the enemies coming.