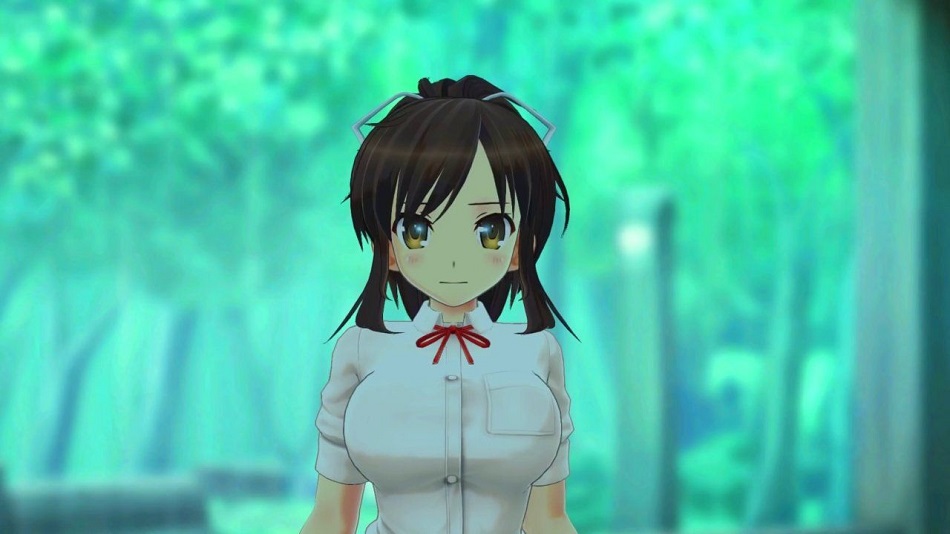 HIGH The true ending’s explanation for the story.

LOW Trying to figure out how to unlock all of the CGs.

WTF What? There’s just one CG? You could have told me that and saved me 45 minutes.

While I won’t go so far as to say that it rivals Assassin’s Creed in this respect, the Senran Kagura series is sure taking its sweet time moving the main plot forward. Between water gun shooters, remakes and pinball games, the developers seem willing to do anything they possibly can to keep selling games while stalling the narrative conclusion that series fans are desperate to see.

Senran Kagura Reflexions is another wheel-spinning sidestory that (at first) seems to be taking place in an alternate dimension. Series star Askua is introduced as a regular high school girl who’s invited a boy to meet her in a classroom after hours. The player controls that boy — or at least his hands — as he attempts to get her to overcome her nervousness and admit her true feelings.

How can he help her with that? The holistic art of reflexology, in which pressure is placed on certain parts of the hand in order to treat various bodily ailments. Here it acts as more of a psychological trigger, though, with Asuka’s fingers each representing a different aspect of her personality. Massaging them allows her to drift into a fantasy world where a more intense massage can take place. 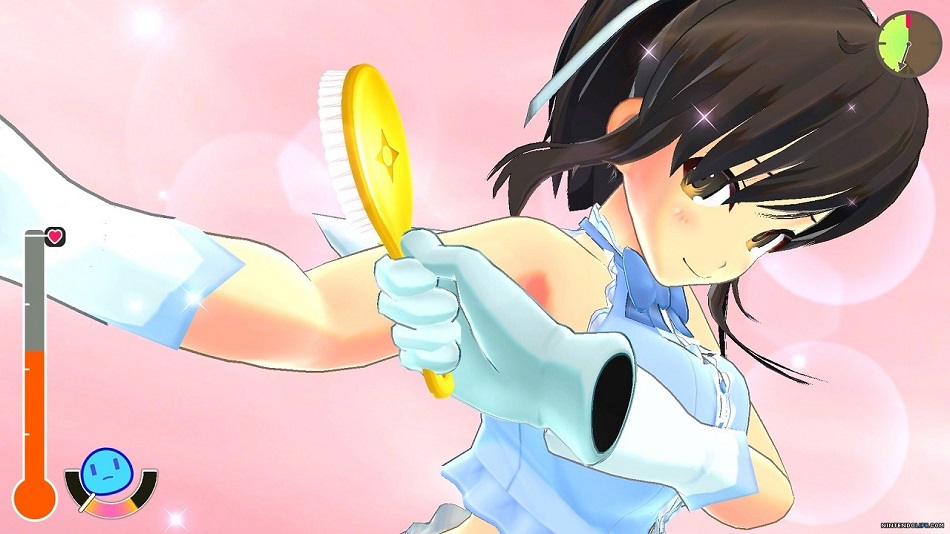 Yes, the meat of the game, so to speak, takes place inside Asuka’s imagination and is structured as an expanded version of the ‘dressing room groping’ minigame that turns up in many of the other SK games. It’s considerably more fleshed-out here — instead of offering a proddable dress-up doll, each of Asuka’s fantasies comes with its own backstory and a wide variety of romantic settings. The seven different personas go from ‘shy student caught in a rainstorm’ to ‘tutor falling for her pupil’, and all the way to ‘mythical swordswoman cooling off after fierce battle’.

Once a fantasy has been introduced, the player is free to touch Asuka just about anywhere using the Switch’s controllers, employing the sticks, triggers, or even gestures to squeeze, prod, or pat the shinobi as she squirms, giggles, or yelps in response. There’s a strategy underlying all of the physical contact — different areas of Asuka’s body and different touch types are tied to different emotions, each one color-coded for ease of comprehension.

After the player has maxed out an emotion, they’re free to end the scene and see how that emotion plays out within Asuka’s fantasy. Over the course of a single playthrough, the player has to trigger five fantasies, and the combined emotional triggers are eventually boiled down to a single color which determines exactly what she wanted to tell her crush in the empty classroom. 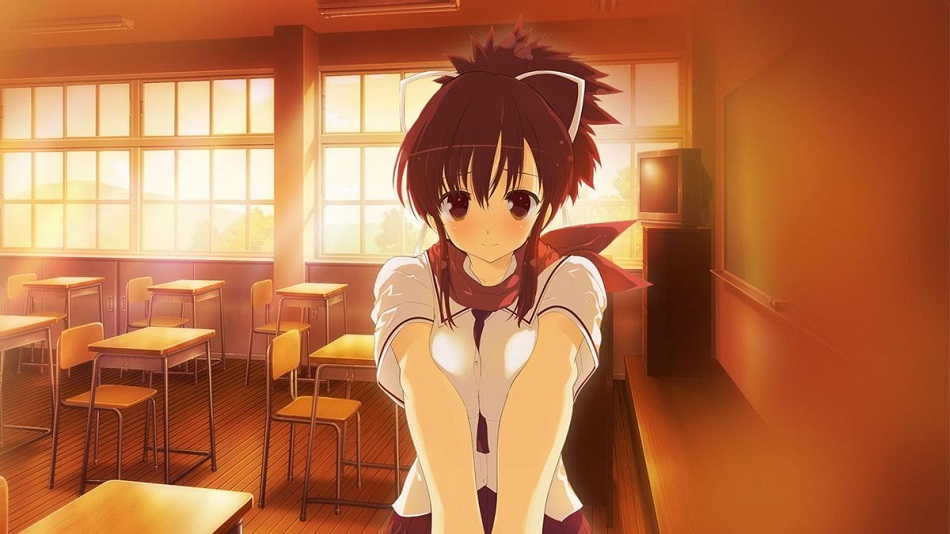 For a game seemingly built exclusively around groping, Reflexions is surprisingly restrained, and that’s largely because of the way the encounters are framed. Even though the player literally spends the whole game either looking at Asuka or engaging her with a pair of floating hands, the story is being told from her point of view, and in every situation she’s the driving force behind their interactions. There’s also huge variance in the power dynamics in the various fantasies — when Asuka is an Idol, she imagines the player as her manager, but when she’s a warrior, the player is just a squire. In every story, though, her intentions and desires are clear — as are her limits. She’ll make it obvious when a line has been crossed, which can, at worst, lead to the least satisfying ending.

Senran Kagura Reflexions is a tiny project. It’s essentially a stretched-out minigame, and a single playthrough will take just under half an hour, meaning all endings can be seen in less than three hours. It still managed to charm me, however, due to how seriously the developers take their characters. Senran Kagura‘s greatest strength has always been its writing, and there’s fine work done here amidst all of the lascivious costumes and playful groping.

No matter how salacious things may get, Reflexions never loses sight of the sweetness at the game’s core – fundamentally, this is a game about a girl attempting to overcome her shyness and tell a boy how she feels about him. While I’ll be happy to get back to battling demons and ninjas when the next full entry in the series is released, I won’t say that this is a waste of the franchise or a disrespectful use of its main character – just the opposite, in fact. Rating: 6 out of 10

Disclosures: This game is developed by Marvelous and published by XSEED. It is currently available on Switch. This copy of the game was obtained via publisher and reviewed on the Switch. Approximately 3 hours of play were devoted to the single-player mode, and the game was completed. There are no multiplayer modes.

Parents: According to the ESRB, this game is rated M and contains Sexual Themes and Partial Nudity. No kids allowed, as usual. In addition to the skimpy costumes – one of them is literally gift-wrapping – some of the content gets close to the borderline of acceptability. One of Asuka’s romantic fantasies casts her as the player’s ‘little sister’, and while that may just be a colloquial term of endearment for a childhood friend, it’s pretty iffy in presentation.

Colorblind Modes: There are no colorblind modes available in the options. While the types of massage are color-coded, each one also has a distinctive shape associated with it for ease of differentiation.

Deaf & Hard of Hearing Gamers: I played the game on mute for most of my time with it, and encountered zero difficulties. Dialogue is subtitled (not resizable) and it’s fully accessible. 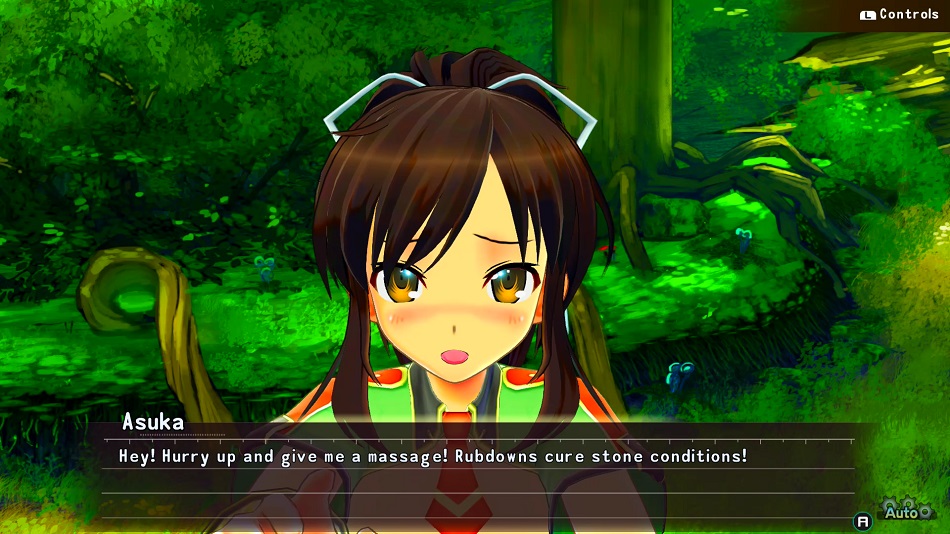 Remappable Controls: No, this game’s controls are not remappable, and there is no control diagram. Players use joycons, with each one representing one of their hands. They can also position their virtual hands suing thumbsticks, and then interact with Asuka with either gestures or buttons. Face buttons are used for navigating menus.