Are You Sure This Counts As Training? 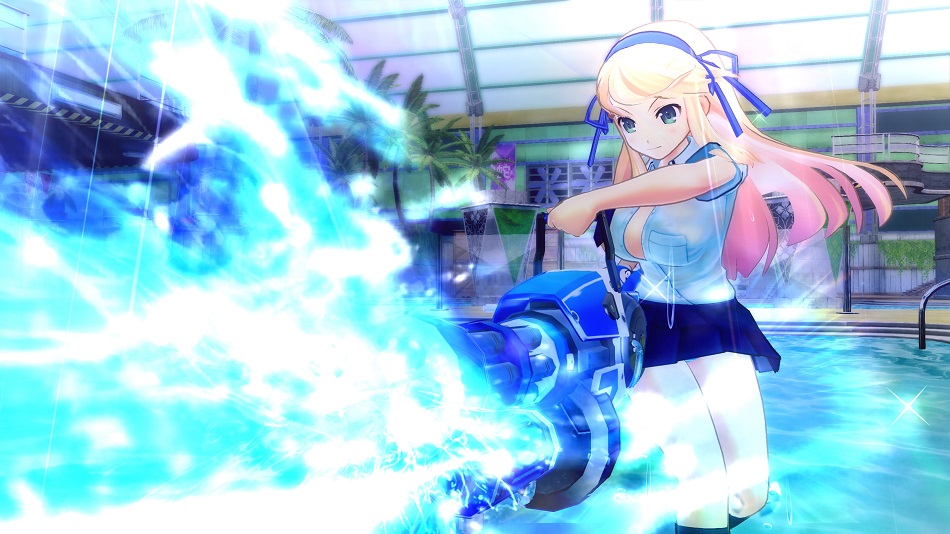 WTF The craziest final boss fight in a series known for them.

Peach Beach Splash starts with a wink, offering an opening movie that depicts the history of the titular watergun tournament including an ancient drawing of busty ninjas shooting water at each other out of bamboo stalks awkwardly transformed into squirt guns. It posits the idea that shinobi have gathered since time immemorial to splash each other with water on a secluded Japanese beach as part of an important ceremony.

…The modern version, of course, is ninja girls in bikinis shooting water guns at one another while the whole thing is streamed over the ninja version of YouTube to fascinated audiences worldwide. To the game’s credit, it knows exactly how absurd all of this is. The plot not only acknowledges the ridiculousness of the premise, but also grapples with the idea of what it means for the entire game to be a sidestory.

The previous entry in the Senran Kagura series – the wonderful and surprisingly dramatic Estival Versus – explained that Shin, the most powerful demon of all was on the way to Earth and it’s likely that the shinobi were not ready to fight him. PBS‘ story revolves around a ceremony designed to keep Shin sealed away a little while longer so that the world’s defenders can better prepare for his arrival.

It’s rare to see a game so blatantly acknowledge its reason for existence. The next traditional Senran Kagura musou wasn’t going to ready by 2016, but they needed to release a game to celebrate the franchise’s fifth anniversary, so Peach Beach Splash was born. In openly admitting its own superfluity, PBS asks players to simply relax and have a good time, promising that the next title will be more meaningful. 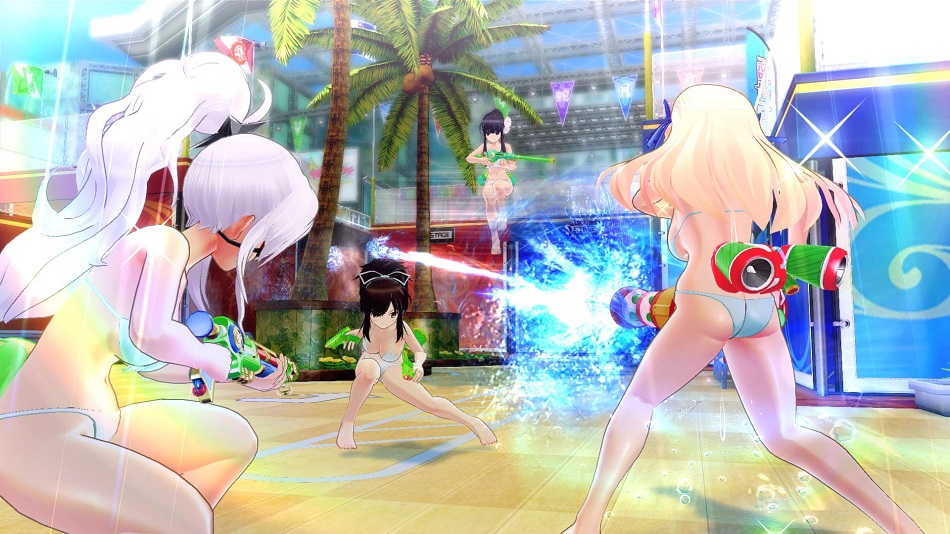 Honestly, Peach Beach Splash is a delight. A 3rd-person team-based shooter, PBS lets players follow four different storylines as the various shinobi heroines battle one another, random hordes of goons, and specialized water-shooting robots on their way to winning the PBS title. Things get a little more serious in the final chapter when the true reason for the tournament is revealed, and the girls have to band together to battle the craziest/stupidest threat they’ve ever encountered.

While the story is as well-written as every other entry in the series, packed with funny scenes and good character moments, the campaign mode isn’t as satisfying as it could have been. Instead of a single narrative that tells a complete story, the four branches each act as a ‘what if this team won the competition?‘ story. That wouldn’t be so bad, except for the fact that the ten missions are exactly the same for each of the four teams. Specific opponents might change, but each team fights the exact same types of battle in the exact same order, so things can get contemptibly familiar by the time players are headed through the campaign for the fourth time. At least each team has its own unique boss – if those were repeated as well, this could have been a real problem.

The shooting gameplay is weighted heavily towards casual audiences — even moreso than the musou gameplay of the main series. All guns are set to auto-aim by default, which means that the player need only move a large targeting square over an enemy and water will automatically be directed at them when the trigger is pulled. Players can switch over to manual aim, but the game is clearly designed with this kind of handholding in mind. PC players have the option to aim with the mouse, which allows for much better shot placement than auto-aim or controllers, but I found the navigation – especially boosting and using water-powered jetpacks – to be considerably more difficult with a keyboard. The water-assisted movement really demands the kind of control that an analog stick offers, and the player’s special powers are easier to activate with the D-Pad than going hunting for the correct key in the heat of battle.

These special powers come in the form of trading cards showcasing the Senran characters in various costumes and settings. Each ninja is associated with a power – fire a super-laser, make a personal shield, increase weapon damage – and the rarer the card a player can find, the better the version of that power is. Players arm themselves with a deck and then as the match begins, cards will be randomly drawn. As players use the cards, new ones are drawn to replace them. So, while players can build as strong a deck as they want, they’ll have to adjust their strategies on the fly during matches since they can never be sure which card will come up. 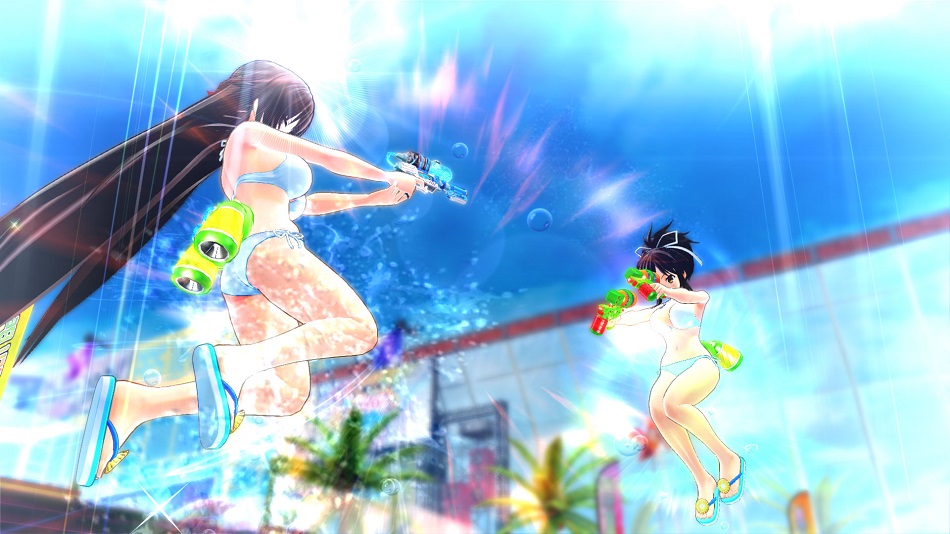 Unfortunately, the card distribution happens slower than feels fair. Whenever a mission or match is completed, players are given a pack of cards valued from 1-5 stars depending on the level of the mission and what difficulty they were playing on. The packs contain 10 cards. One card will always be the level of the pack, and usually the rest will be 1-star cards. This is incredibly frustrating, because it slows character development to a crawl. The shinobi, their special abilities and weapons are all powered-up by sacrificing card doubles. Their value in experience points is based on the card rarity, with the highest rank worth 100 – a decent, but not overwhelming amount.

For the first few hours of the game, players are only going to be finding cards they don’t have. This means they’ll only have 1-star doubles to upgrade with, making the start of the campaign a bit of a slog. On the upside, most of the campaign can be beaten without too much trouble, so long as the player focuses on leveling up one weapon and makes sure to use it in every plot battle. Once the four storylines are done it’s easy enough to grind boss fights for high-level cards for the final challenge, but that’s a time commitment I can’t imagine everyone will be excited to make. The devs could have easily tweaked the cards’ distribution to make replaying matches feel more rewarding, especially early in the game.

Outside the campaign, PBS shines in multiplayer, where it proves to be much more strategic than the story mode would suggest. When battling with AI sidekicks, it’s generally best to stick with the assault rifle, pistols, and shotgun — all decent weapons that can be reloaded quickly. In multiplayer, there’s a chance to take on a support role and employ the hose and spray weapons that are specifically designed to soak one’s own teammates and power them up. With this assistance, suddenly the slower, beefier weapons become viable choices, and the name of the game becomes protect the support troops that keep the heavy-hitters fueled up.

Peach Beach Splash isn’t as much of a departure from the series as Bon Apetit was, but it’s still somewhat inconsequential compared to a mainline entry like Estival Versus. Blasting bikini ninja with water is cute, the gameplay is mostly solid, and it does a serviceable job of increasing the threat of Shin to set up the next game, but Senran Kagura risks sacrificing the momentum of the series overall with too many ancillary games. Rating: 7 out of 10

Parents: According to the ESRB, this game is rated M and contains Fantasy Violence, Partial Nudity, Sexual Themes, and Strong Language. Yup, it’s another Senran Kagura game to keep the kids away from. There’s Ryobi’s foul mouth, Katsuragi’s semi-consensual groping, endless cheesecake CGs… Oh, and the ‘finishing move’ for humiliating defeated foes by spraying them with water until their bikinis fly off. Not for kids. Seriously.

Deaf & Hard of Hearing Gamers: You’ll be completely fine. There are no major audio cues, and all story is subtitled. During battles, a radar informs you of enemy locations, so you won’t have to worry about being taken by surprise. it’s fully accessible.