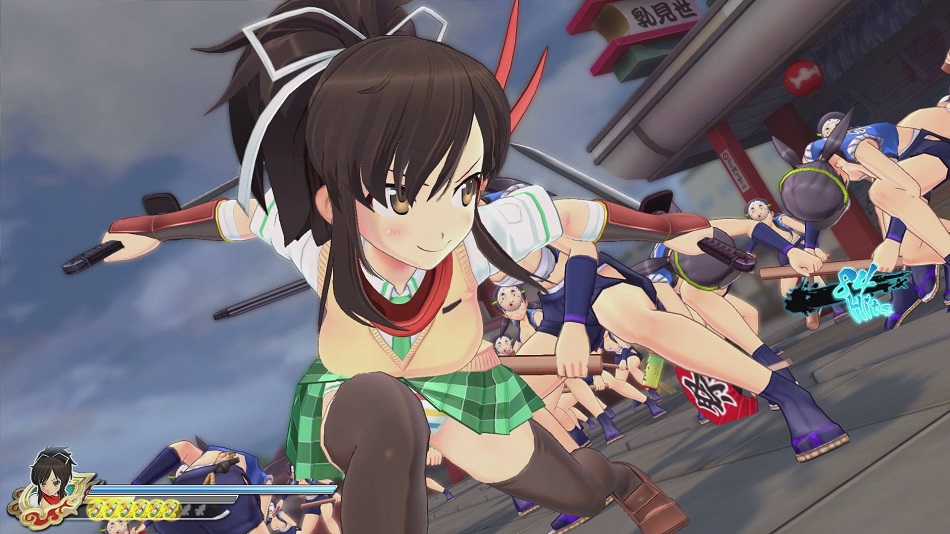 HIGH A certain moment about a certain rice dish…

WTF Um… Where to start?

It’s impossible to compliment this game’s writing enough. Yes, it’s strange to say about this busty ninja franchise, but the fact remains that it’s one of the consistently best-written series around. There’s a mixture of comedy, drama, and genuine tragedy that few other games would attempt, let alone be able to succeed at. Am I saying that poeple should play the game where characters fight until one of them is naked for the story?

The plot kicks off when two ninja students are shocked to see the ghost of their long-dead older sister. They follow her into a mysterious realm and soon find themselves surrounded by classmates and rivals, all of whom have been drawn to a supernatural beach by a mysterious force. This force intends to teach them a vitally important lesson… and also to give them a nice beach vacation, because supernatural powers aren’t wholly without sympathy.

The gameplay is entirely focused on a series of musou battles (think Dynasty Warriors) with players controlling one of the twenty or so heroines in one of a dozen regions filled with a horde of random ninjas and a boss at the end. The level design doesn’t have any real variety to it – no bonus conditions or strange objectives, just fifty-odd straight fights until the game ends, with the player controlling all of the shinobi two or three times each. Luckily the combat is engaging – characters have ground and air combos, launch moves, and a variety of special attacks. Each character feels unique as well, each with completely different speeds and movesets. There are no real duds in the cast, and with enough practice, any character is fully able to beat any of the others. (Except for the bosses, of course, but they’re unbalanced on purpose.) 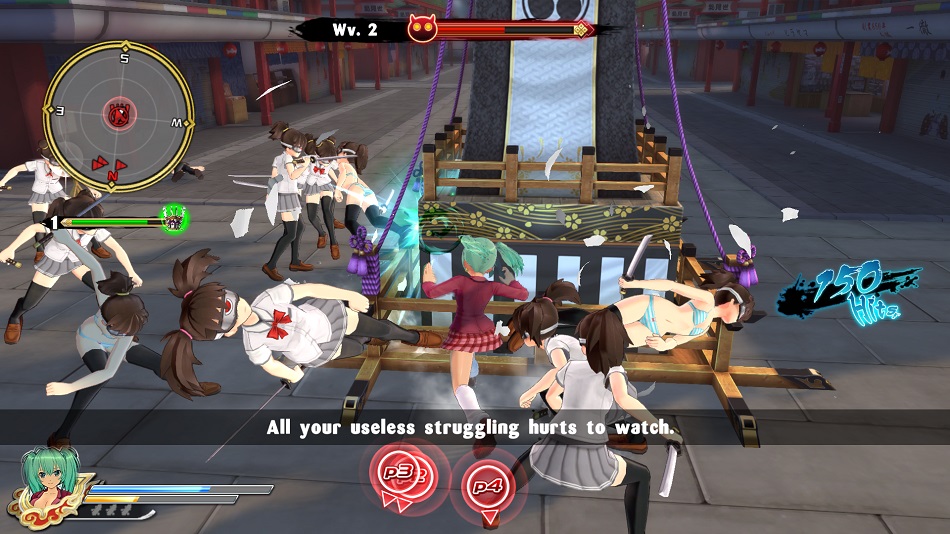 Combat has just enough strategy to ensure that it works well in both single player and multiplayer modes. Blocks, parries, and counters ensure that characters with rapid attacks can’t steamroll slower opponents, and an easy-to-manage dodge system keeps ranged characters from spamming attacks until their foes all collapse. The only real balance issue are a few freezing attacks which can get dangerously close to stun-lock territory, but even they aren’t too difficult to deal with after practice.

This brings me to the true high point of Estival Versus – the story. Even with a huge cast, most of the characters get their own complete subplot, with at least one mission devoted entirely to them dealing with their story arc. Tonally, the game is all over the place – stories about writer’s block and obsessive fandom sit next to those about abusive relationships and attempting to deal with the untimely death of a parent.

The true accomplishment is that the game never loses its grip on what it wants the player to feel — when it wants laughs, it gets them, and when it wants tears, it will wring those out too. Estival Versus is essentially is a side-story about a trip out of time so that the various characters can deal with their personal issues before things get deadly serious back in the real world. As such, it’s concerned entirely with the emotions and interactions of the cast, and the writers have done an incredible job of making it all satisfying. These are some of the most interesting characters available outside of the Yakuza franchise, and that isn’t something to be said lightly.

As a musou brawler, Estival Versus is simply average. The gameplay is tight, but has no special innovations or notable facets, beyond copious amounts of nudity. Seriously, the game even allows players to end matches with what can only be termed ‘Nudalities’. No, it’s the story that elevates the game to an entirely higher level. It’s funny and thoughtful and heartwrenching, and the gameplay was as good as its story, this would be one of the all-time greats, but even though it can’t quite match that lofty quality, it still stands as an impressive experience from beginning to end. Rating: 8.5 out of 10

Parents: According to the ESRB, this game is rated M and contains partial nudity, sexual themes, and strong language, violence. Yup, it’s not for kids. This is about extremely busty ninjas punching one another until their clothes come flying off. Beyond that there’s nothing too bad. One character smokes, much conversation concerns how to deal with the death of family members. Other than that, it’s all fairly innocuous, or positive, even.

Deaf & Hard of Hearing Gamers: There are no vital audio cues of any kind. It’s fully accessible.